Astrology, primary directions, and the death of Steve Jobs

In my previous post I looked at a tarot reading about the passing of Steve Jobs.  In this post I would like to consider a bit of the astrology involved.  Here is his birth chart, calculated from the data in his birth certificate, so it is fairly accurate as to the time of birth: 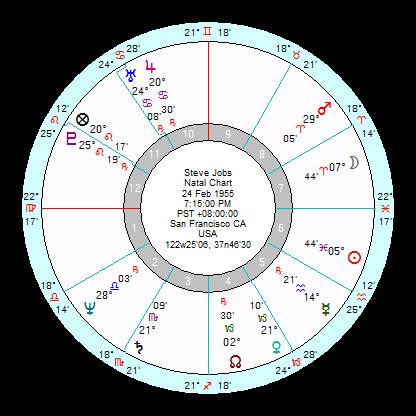 Can his demise be predicted from this birth chart?   In astrology the 8th house signifies one’s death.  Mr. Job’s has the sign Aries (ruled by Mars) on the cusp of his 8th house.  In addition, Mars lies inside his 8th house, making the planet Mars the signifier of death in his chart.

Using the ancient and powerful method of primary directions, we could surmise that his death might occur in his 50s.  The principle behind this conjecture is that each year of life corresponds symbolically to the passage of one degree across the Midheaven (vertical axis of the chart) following the moment of birth.  Roughly 52 degrees of the zodiac belt lie between Mars in the 8th house and the Midheaven, suggesting a life-span of 50-something years.  The exact measure is taken not along the zodiac but in “right ascension,” which is a measure along the celestial equator, which is angled about 23 degrees from the zodiac circle.

The method of primary directions is a way to calculate when such relationships become exact.  For the technically minded, Mr. Job’s Midheaven meets up with his natal Mars on October 4, 2011 — almost the exact date of his death.  (This calculation was made using zodiacal Placidus semi-arc directions, with latitude, and the Kepler key of measurement, aka the key of Brahe or “true day” key.  It is a measure of how far the sun travels in right ascension on the day of birth.  Without latitude correction the date would be Aug 22, 2011.)

If we use the key of Ptolemy (1 day = 1 degree), the the Ascendant ruler Mercury opposes his Midheaven on June 6, 2011 (without latitude) and on January 28, 2012 (with latitude).  This is another potential indicator of death since Mercury rules the Ascendant (his body and life force) and the 4th cusp (opposite the Midheaven) signifies the end of life.  Hence, the period from June 2011 through January 2012 is highlighted as a likely time of death.  Early October is at the midpoint of this period.  Specifically, October 2, 2011, is at the midpoint of the two dates given by the Ptolomy key, with and without latitude.

The Kepler key appears more compelling but the Ptolemy key is very close to the actual date of death and confirms the message of the Kepler key.  The fact that both these methods of primary direction point to October of 2011 as a likely time of death is a testament to the power of this technique.

Here is a link to more about Steve Job’s birth chart:

[Note: The calculations for this article were done using the Janus 4 Astrology Program, which appears to use the same mathematical routines as the old DOS CCRS 92 program which I always relied on for the calculation of primary directions.  Other programs, such as Solar Fire, seem to produce different calculations.]

19 Responses to Astrology, primary directions, and the death of Steve Jobs