The bizarre dictator of North Korea (known for his bouffant hairdo, oversize glasses and elevator shoes) apparently died on December 17, 2011 at 8:30 a.m. of a massive heart attack brought on by years of overindulgence in lusty women, rich foods, cognac and expensive cigars while his people were left starving.    He ruled North Korea with an iron hand.  His people lived in poverty and fear while he continually satisfied his hedonistic appetite and kept an absolute grip on power by evil means.  Kim Jong IL was no lover of the truth.  He lied and manipulated people repeatedly, even falsifying his birth data to make himself look divine.  The LA Times reports that “he ignored pressure to release an estimated 200,000 citizens kept in a gulag of prison camps, some for transgressions as minor as failing to keep portraits of Kim and his father on their walls.”  It is scary to think that this petty tyrant had access to nuclear weapons.  We can only hope that with his demise the North Korean people can finally have access to truth and freedom after years of lies and oppression.

The Encyclopedia Britannica reports that Kim Jong Il was born in Siberia of the Soviet Union on February 16, 1941.  Kim´s official biography states that he was born under a double rainbow on a sacred mountain.   Who wouldn’t believe that?   Apparently the “official” year of his birth was also changed from 1941 to 1942 because the diminutive tyrant preferred a more convenient 30-year age difference between himself and his father.   Because he was such a liar, it is not 100% certain what his birth data really are.    Most sources agree with the one cited above, so I cast a sunrise chart for that date in Khabarovsk, Soviet Union. 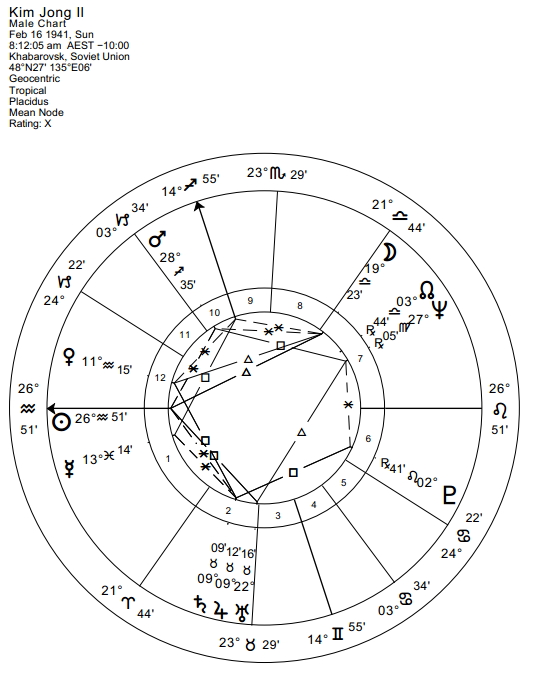 What is most striking about this horoscope is the amount of fixity.  He has 6 planets in fixed signs including Venus, Sun, Saturn, Jupiter, Uranus, and Pluto.  Excessive fixity tends to make people willful, determined, rigid, opinionated, single-minded, and resistant to change.  Once he got hold of power he never wanted to let go.

His Sun is debilitated, being in detriment in Aquarius, and it squares Uranus.  Sun square Uranus often indicates dictatorial tendencies.  The Sun is disposed by Saturn which tightly conjoins Jupiter, adding to his narcissism, grandiosity, and feeling that he is above the law.  The Saturn-Jupiter conjunction squares Pluto, which adds to his dictatorial tendencies and suggests a lust for power.  The afflicted Sun closely sextile Mars suggests an arrogant but dynamic leader.  The Sun is also closely sextile Mars in the chart of another  arrogant leader, President Jacob Zuma of South Africa.