Seeing death in the horoscope

In a previous post we looked at the chart of astrologer C.E.O. Carter who foresaw his own death in his birth chart.  I believe that Carter studied the chart of his progressed New Moon to predict the year of his death.  For those unfamiliar with the technique of secondary progression, it is a symbolic timing measure in which each day after birth is equated to a year of life.  For example, if you were born on January 10, then the positions of the planets on January 11 would reflect your life at age 1, and the positions on January 25 would reflect your life at age 15, etc.

As another example, let’s consider the chart of Nobel Prize winning author Ernest Hemingway who was born on 21 July 1899 at 8 AM in Oak Park, IL, and who died by suicide by gunshot on 2 July 1961.  Here is the birth chart:

We begin by asking whether there are any indications of suicide in the birth chart.  The 8th house rules death and has Aries on the cusp.  Mars rules Aries by domicile and becomes the ruler of his 8th house of death.  Mars occupies the 1st house in his natal chart, suggesting that he will play a significant role in his own death.  Morin in Book 21 of Astrologia Gallica, Chapter V, says:

“If the ruler of the 1st house is in the 8th house, or the ruler of the 8th is in the 1st, it indicates a premature death; and the native himself is the principal cause of his own death by, wittingly or unwittingly, deliberately placing himself in danger, as for example in cases of those who attempt to stave off death by performing excessive blood letting in an immoderate effort to cure their illness” (my translation).  Hemingway died prematurely by his own hand, so Morin’s 17th century observation certainly applies.

Mars is particularly afflicted because it squares both Saturn and Pluto as part of a high-energy T-square formation.  Saturn and Pluto are both natural signifiers of death.   Saturn is particularly significant because it occupies the 4th house of the end of life.  In Morin’s system, Mars in Virgo is peregrine and expresses itself through its dispositor Mercury, which lies in the unfortunate 12th house of sorrow and self-undoing, including suicide.  Mars rules firearms and other weapons.  Mars also squares Neptune, which suggests that his death will be related to clouded perception, possibly related to mental illness since a part of Pisces (ruled by Neptune) lies in the 6th house of illness.  The natal chart certainly carries the potential of a self-inflicted gunshot wound at the end of life.

Saturn in the end-of-life 4th house is retrograde and peregrine and thus expresses itself through its dispositor Jupiter, which lies in Scorpio (ruled by Pluto) and is square the Sun, which rules the 12th house of suicide.  The Sun is also exalted in Aries and so rules the 8th house of death by exaltation.  All-in-all, his death by suicide is clearly foreshadowed in the natal chart.

When working with progressed charts that contain retrograde planets, it is always worthwhile to determine when the natal retrograde planets become stationary and turn direct by secondary progression.  Such periods are always highly important in the life of the native with reference to the matters symbolized by the natally retrograde planet.

In Hemingway’s case, natal Saturn turned direct by secondary progression in September of 1930 and continued on to conjoin its natal position on 12 April 1961.    His father had committed suicide with a gun in 1928.  In 1929 his novel A Farewell to Arms was published and became very successful.  In 1930-31 his financial success allowed him to establish his first American home in Key West, Florida.  These events correlate with Saturn turning direct by progression in his 4th house of family and home. 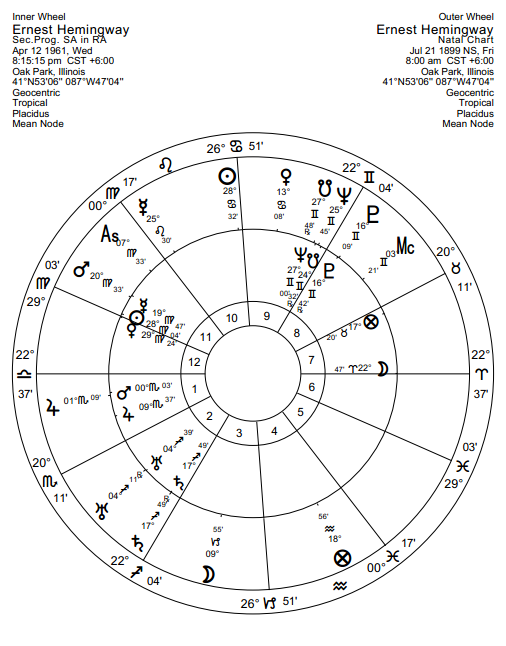 Another striking feature is that the primary directed Mars (ruler of death) conjoined the natal Sun (ruler of the 12th of suicide) on 2 July 1961, the exact date of his suicide (Regiomontanus primary with latitude, using Ptolemy’s measure of 1 degree RA = 1 year).

63 Responses to Seeing death in the horoscope