As everyone knows by now, singer Whitney Houston was found dead in a bathtub at a Beverly Hills hotel on Saturday, 11 February 2011.  She was pronounced dead at 3:55 p.m. (6:55 p.m. ET) at the Beverly Hilton.  As I write this, the autopsy has not been done and the official cause of death is unknown.

In astrology, death is shown by the 8th house.  Planets occupying the 8th and the rulers of the 8th are especially significant.  In Whitney’s chart, Neptune in Scorpio (a water sign) occupies the 8th.  With Libra on the 8th cusp, Venus rules the 8th by domicile, and Saturn rules the 8th by exaltation.  Saturn also rules her unfortunate 12th house, and Venus occupies her unfortunate 6th house, which is ruled by the Sun.  The 6th house Sun opposes 12th house Saturn, and both planets of this opposition square Neptune in the 8th:  a T-square suggesting an unfortunate death involving water or drowning (Neptune).  Here is the birth chart:

Morin felt that the planet occupying a house was most significant.  Here Neptune in the 8th suggests a Neptunian death.  Neptune, of course, is god of the seas, so in hindsight it is easy to see death in a bathtub.  Neptune lies in Scorpio, a sign associated with cleaning and the removal of waste – a fitting symbol for a bathtub.  Libra, ruled by Venus, is concerned with beauty and luxury.  The connection with a luxury Beverly Hills hotel is apparent, especially since Venus also rules the 3rd of local travel and travelers stay in hotels.  Venus, ruler of the 8th, occupies the 6th house of personal hygiene: she died in a bathtub.  Saturn, ruling the 8th by exaltation, lies in the 12th house of seclusion and isolation, suggesting that she would die alone.  The Sun conjoins 8th ruler Venus in Leo, suggesting that her demise would be widely publicized.  [The Sun rules the 6th of illness, which raises the possibility of heart problems.  With the Leo Sun (the heart) opposed to Saturn (difficulties) in Aquarius (electrical current) in the 12th (undoing), a cardiac arrhythmia could be implicated in her death.]

If we look at her primary directions involving her 8th house at the time of her death, we find that the opposition of 8th house occupant Neptune came to natal Saturn on 29 Dec 2011 and was clearly in effect during this period (Regiomontanus primary, with latitude, Naibod rate).

The various ways of looking at her Solar Return (SR) also give prominence to Neptune and Saturn.  I don’t know where she spent her last birthday, so I opted to look at the Solar Return for her birthplace.  The most striking return chart is the converse SR for her place of birth, which has her natal Sun on the SR ASC, her natal Saturn opposite the SR ASC, her natal Neptune on the SR 4th house cusp (conditions at the end of life), her natal ASC on the SR 8th cusp, her natal Mercury (ruler of the end of life natal 4th) exactly opposite the SR 8th cusp (Placidus), and her natal 8th ruler Venus opposite the SR Uranus (sudden or unexpected death).  The prominence of Neptune, Saturn in the 12th,  and Venus in the 6th raise the possibility of some type of drug or medication being implicated in her death; the autopsy report should clarify this matter.   Here is the chart with the converse SR in the center and her natal chart in the outer wheel: 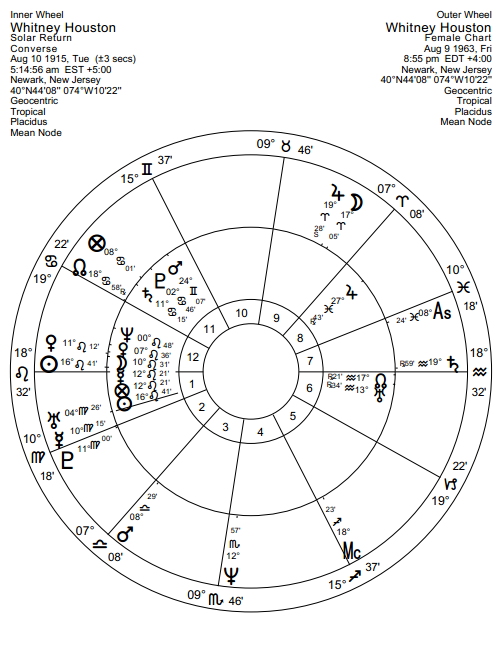 For a Hellenistic take on the astrology of the singer’s demise, I recommend the discussion at Seven Stars Astrology.

Addendum:  News stories are suggesting that the cause of death was related to a combination of medications and alcohol, which is entirely consistent with an afflicted Neptune (intoxicants, drugs) in Scorpio (intense desire or experiences) in the 8th house (death) and the stress on 6th (illness) and 12th house (undoing) issues.  On Feb 13, 2012, tmz.com reported:

“Houston’s family was told by L.A. County Coroner officials … the singer did not die from drowning, but rather from what appears to be a combination of Xanax and other prescription drugs mixed with alcohol … this according to family sources.  We’re told Coroner’s officials informed the family there was not enough water in Whitney’s lungs to lead to the conclusion that she drowned.   Our sources say the family was told Whitney may well have died before her head became submerged.”

Determination of the official cause of death may take weeks.

The cause of death was released today by the coroner.  As the natal chart suggested, she died of drowning complicated by her cocaine addition.  When celebrities die suddenly, cocaine is often involved.  Here is the CNN report:  “Whitney Houston died from an accidental drowning in a hotel bathtub, but the ‘effects of atherosclerotic heart disease and cocaine use’ were contributing factors in her death, the Los Angeles County coroner said in an initial autopsy report released Thursday.”

Author of books about astrology and tarot, including TAROT PLAIN AND SIMPLE, HORARY ASTROLOGY, and THE ART OF FORECASTING WITH SOLAR RETURNS.
View all posts by Anthony Louis →
This entry was posted in Astrology and tagged converse solar return, primary directions, singer whitney houston, solar return, Whitney Houston. Bookmark the permalink.