Much has appeared in the astrological literature recently about this year’s transiting Uranus square Pluto aspect which currently becomes exact on September 19, 2012, one day after Pluto turns stationary direct.  There are seven exact Uranus/Pluto squares between 2012 and 2015.   Among other things, the current unrest in the Middle East has been blamed on it.

Today I got some upsetting news from a colleague who learned that her cousin was found dead in his apartment this morning.  He had been despondent over the summer and had a history of mood swings.  When he did not show up for work this morning, concerned friends went to his apartment where he had apparently hanged himself.  Knowing that today was the day of a Pluto station, I wondered what Pluto might have activated in his chart.  My colleague gave me her cousin’s birth date but she did not know his time of birth.  Below is the natal chart with the Sun on the ASC and the Noon positions (actual time of birth is unknown).  Superimposed around the natal chart are the current transits for the approximate time of death according to the police report. 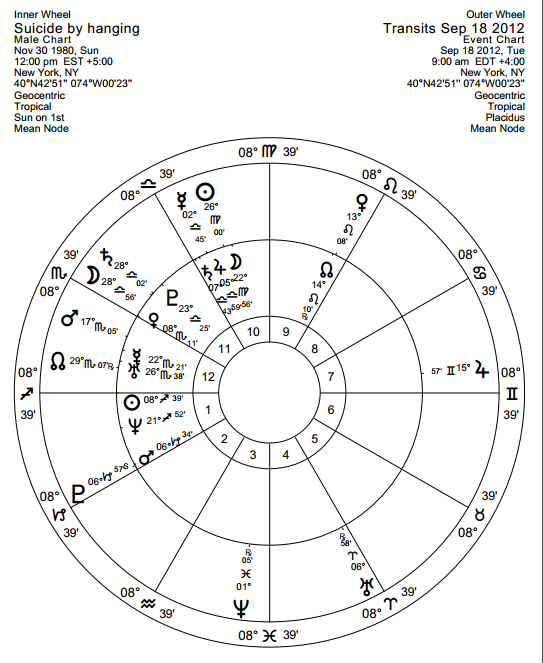 The transiting Pluto/Uranus square closely aspects his natal Mars.  If he were born close to midnight, transiting Pluto would have stationed exactly conjunct natal Mars with transiting Uranus exactly square it.  In the solar chart, Mars rules the 12th house of suicide and undoing (Pluto is the modern ruler of the Scorpio 12th).  Also striking is that transiting Uranus closely opposes his natal Saturn/Jupiter conjunction.  Actually transiting Uranus almost exactly opposes the natal Saturn/Jupiter midpoint, a configuration that Ebertin interprets as: “strong emotional tensions, a frequent change of mood, irritability, a sudden loss of consciousness (through illness, shock or death)…”

It is quite striking how the astrological symbolism plays out in this tragic event.

Addendum (20 Sep 2012):  After reading Moira’s comment, I went back and looked at this young man’s solar return for the current year (using the Noon positions for his birth date).  Here is the SR chart with his natal positions posted around it. 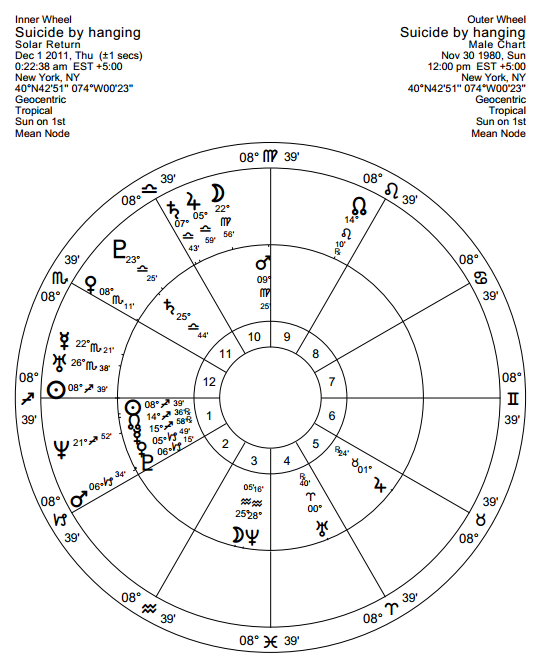 Solar Return for current year with natal Noon positions around it.

Author of books about astrology and tarot, including TAROT PLAIN AND SIMPLE, HORARY ASTROLOGY, and THE ART OF FORECASTING WITH SOLAR RETURNS.
View all posts by Anthony Louis →
This entry was posted in Astrology and tagged Pluto station, suicide, suicide by hanging, uranus square pluto. Bookmark the permalink.