Recently I read a horary chart analysis done by the famous astrologer Alan Leo in 1898.  Astrologer Lee Lehman, on her site, reproduced Alan Leo’s text (now in the public domain) which he published in 1907 in No. 7, Horary Astrology, of his series of Astrological Manuals, pp. 43-47.  Leo cast the chart for 8:10 a.m. on October 26, 1898 for the related questions:

“Will it be wise to float a new company for the sale of a prepared food likely to meet with a large consumption?  Will the new venture be a profitable one, or will it incur much loss?”  (Leo, 1907)

This question was asked in a letter received and read by Alan Leo at 8:10 a.m. on 26 October 1898 at his office in London.  The querent was a well-known manufacturer who wanted to market a new food preparation at the urging of his son.  Seeing the horary ASC in Scorpio, the Sun-sign of the querent, Alan Leo judged the chart to be “radical” or fit to judge.  In addition, the querent asked for secrecy about the matter (a Scorpio trait).  Alan Leo gave the following response:

“You will be very determined in your efforts to place your preparation upon the market, but the company will not be floated and I judge you will lose a considerable sum over the venture. The figure shows waste of money and I cannot advise your risking much money to prove the truth of this judgment.”

Despite Leo’s advice, the querent made a determined effort to form a company, which failed and also cost the querent hundreds of pounds (a lot of money in those days).  Here is Leo’s horary chart: 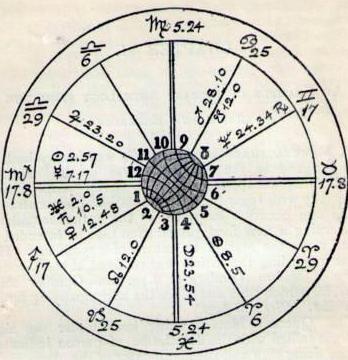 Here is the chart William Lilly would have used if he had received the same question: 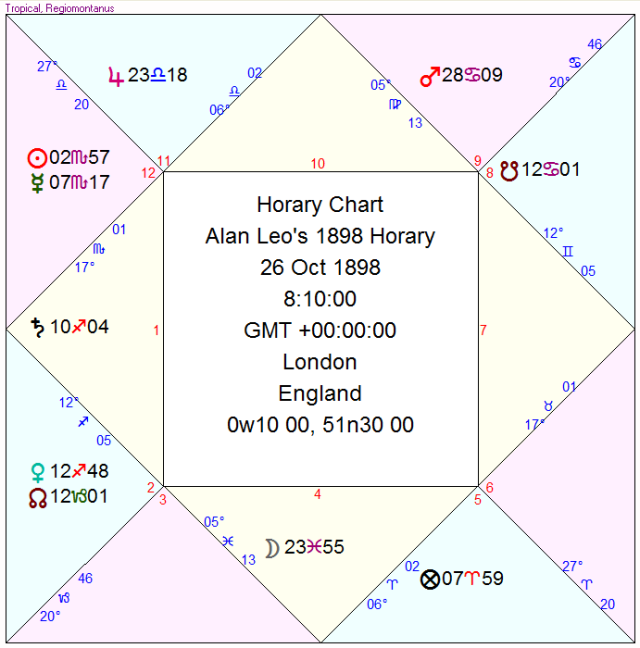 I do not agree with Alan Leo that the separating Mars square Jupiter aspect is the key to the chart.  My own take upon first looking at the chart went as follows:

The enterprise is a 10th house matter, ruled by Mercury (Virgo on the 10th cusp).  Mercury lies in the 12th (undoing, deception), is peregrine (without essential dignity), and is combust the Sun.  Being so debilitated, Mercury as ruler of the new enterprise suggests that it will not be successful.  Mercury’s 12th house position suggests that the querent is self-deluded or being deceived about its prospects.  Mercury is also ruler of the 8th (the public’s money) and indicates a lack of willingness of the public to spend on the new product.

The income from the new venture is shown by Venus (ruler of the 11th = 2nd of the 10th and occupant of the 2nd (the querent’s income, which is also shown by Jupiter as ruler of the 2nd cusp).  The querent is ruled by a peregrine and debilitated Mars in fall in Cancer (food).  He is powerless and inadequate to produce a new foodstuff.   Venus makes to aspect to Mars, and Mars separates from a square to Jupiter – neither of these factors indicates a good future income for the querent.

Venus (income from the venture and the querent’s income) conjoins Saturn as the cusp of the 2nd house, suggesting a loss of income.  Jupiter, which rules the 2nd of income, has only 1 point of essential dignity and lies under the sun’s beams.

In this chart the Sun, which is exalted in Aries, is the almuten of the 5th house cusp and of the Part of Fortune in the 5th. The peregrine Sun’s placement in the 12th does not bode well for the 5th house gamble he is taking or the fortune he is seeking.

Thus, I think we can arrive at the same conclusion as Alan Leo without changing the traditional view that separating aspects refer to past events (unless the aspect is re-enlivened by a translation or collection of light, which does not occur in this chart.)

A final note:  Though Leo doesn’t tell us, I assume the events described in his text took a year or so to develop.  I cast the first solar return of the horary question, which occurred a year later on 26 October 1899 at 14:08:27 UT.  The solar return Midheaven at 8 Sagittarius 28 conjoins Saturn in the original horary chart, the return Ascendant at 10 Aquarius 54 squares Saturn in the horary chart, and return Uranus at 6 Sagittarius 13 conjoins the SR Midheaven – all indicators of the predicted disruptive negative outcome.

Author of books about astrology and tarot, including TAROT PLAIN AND SIMPLE, HORARY ASTROLOGY, and THE ART OF FORECASTING WITH SOLAR RETURNS.
View all posts by Anthony Louis →
This entry was posted in Astrology and tagged Alan Leo, horary astrology. Bookmark the permalink.