Anatomy of a Murder-Suicide

Around 8 a.m. on Saturday, 01 December 2012, Kansas City Chiefs linebacker Jovan Belcher shot and killed his girlfriend with whom he had a 3-month-old child.  He then drove to Arrowhead Stadium and shot himself in the head after thanking his coach and general manager for all they’d done for him.  The 25-year-old Belcher and his 22-year-old girlfriend, Kasandra M. Perkins, were reported to have been arguing recently.

According to boston.com: The coaches told police they never felt in any danger, Snapp said.  ‘‘They said the player was actually thanking them for everything they’d done for him,’’ he said. ‘‘They were just talking to him and he was thanking them and everything. That’s when he walked away and shot himself.’’

Belcher has an impressive five planets in Fire signs, which no doubt contribute to his athletic ability.  A tremendous amount of power and determination is shown by Pluto opposing Jupiter from Scorpio to Aries.  This Pluto/Jupiter opposition lies in square to his Sun/Mars conjunction in Leo.  This is a man of immense power and passion that can sometimes run away with him.  Mars square Pluto often correlates with the use of force or violence to settle difference with others.  Sun and Mars in Leo show great motivation and leadership ability, and in fact Belcher was  referred to in news reports as a “natural born leader.”  A Leo emphasis often indicates a fondness for coaching and working with young people.  Belcher returned annualy to West Babylon High School to give motivational speeches to the kids there.

What was going on astrologically this year that could lead to such a tragedy?  One way to answer this question is to look at the solar return of the sunrise chart and compare it to the natal chart:

In solar returns the conjunctions of planets with the angles and with the intermediate house cusps reflect the important themes for the year.  We are immediately struck by natal Mars conjunct SR Mercury on the Ascendant of the solar return.  Mars is a planet of force and Mercury, of communication.  This is a year of forceful communications.  SR Mercury conjoins the 12th cusp of undoing, so that something being communicated is disturbing and likely to lead to misunderstandings, especially with Mercury ruling the 3rd house of communications.

Belcher’s natal Pluto/Jupiter opposition is highly emphasized this year because natal Jupiter conjoins the SR Midheaven.  (The Ascendant and Midheaven are the two most powerful points in the chart.)  His natal Pluto/Jupiter opposition squares the SR Mars/natal Mercury conjunction on the SR Ascendant.  Thus, his tendency to passionate impulsiveness with a potential to resort to violence comes to the fore during his 2012 solar return year.  Finally, Neptune (confusion, deception) which opposes his natal Mercury (communication) has moved to conjoin the 8th house (death) cusp in the 2012 solar return.

Transits often trigger an event.  Since we know the approximate time of death (shortly after 8 a.m.), we can compare the transit chart to his natal chart: 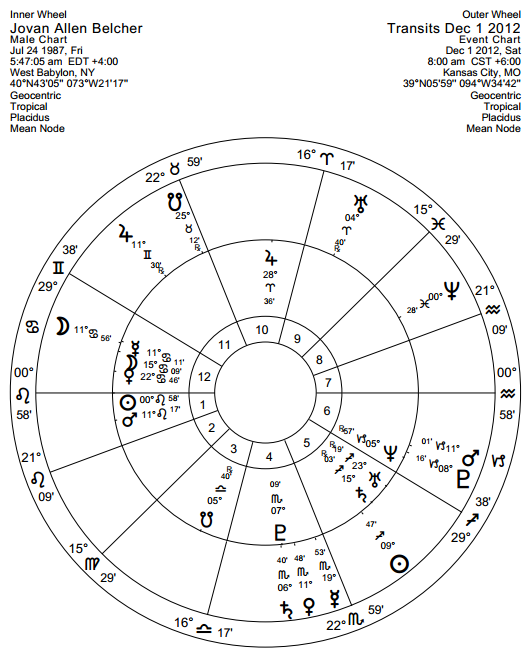 Belcher natal sunrise chart with transits at time of murder/suicide

Two factors immediately stand out.  Slow-moving Saturn is transiting his natal Pluto, putting pressure on the T-square formation: Pluto – Jupiter – Mars/Sun.  Saturn/Pluto conjunctions can be quite destabilizing as they challenge the very structure around which you have built your life.  Things which you have always taken as givens begin to fall apart.

Mars, which was so prominent in the solar return, has moved by transit to oppose natal Mercury.  Typically this transit (Mars to Mercury) manifests in harsh words, arguments, and impulsive actions.  Fanning the fire is the transiting emotional Moon conjoining natal Mercury and opposing transiting Mars.  Emotional disputes (Moon oppose Mars) dominate the scene and reason takes a back seat.  Natal Mercury, which is on the receiving end of the Mars/Moon transit, lies in the natal 12th house of self-undoing.

Author of books about astrology and tarot, including TAROT PLAIN AND SIMPLE, HORARY ASTROLOGY, and THE ART OF FORECASTING WITH SOLAR RETURNS.
View all posts by Anthony Louis →
This entry was posted in Astrology and tagged Belcher, Jovan Belcher, murder, murder suicide, suicide. Bookmark the permalink.

3 Responses to Anatomy of a Murder-Suicide