Alexander the Great and the Crucifixion of Jesus

In studying the life and birth chart of Alexander the Great, it occurred to me that the Christian religion borrowed some of its symbolism from the Alexandrian myth.  According to wikipedia, “Alexander took the Persian title “King of Kings” (Shahanshah) and adopted some elements of Persian dress and customs at his court, notably the custom of proskynesis, either a symbolic kissing of the hand, or prostration on the ground, that Persians showed to their social superiors.”

The Christian church later followed suit, calling Jesus “king of kings and lord of lords” after biblical passages from the Book of Revelation 17:14 and 19:16 and comments in Matthew 28:18 that all authority on earth was given to Jesus.  Both men were traditionally believed to have died around age 33, Alexander just before his 33rd birthday and Jesus in year 33 AD (the year of our Lord). 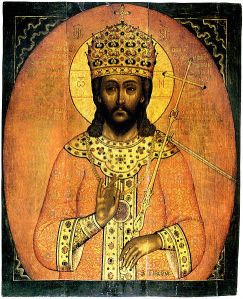 Jesus as the King of Kings in the tradition of Alexander the Great.

A likely astrological date for the birth of Christianity is the crucifixion of Jesus, which most scholars date as occurring during the period of the Jewish Passover on Friday, 3 April 33 AD, the same day as a lunar eclipse.  In biblical accounts Jesus died on the cross during the 9th hour of the day at a place called Calvary or Golgotha, whose coordinates are 31°46′43″N 35°13′46″E.

As far as I can tell, the Romans were using the planetary hour system they inherited from the Chaldeans.  The first hour after sunrise on Friday belonged to Venus and the remaining hours were named in Chaldean order.  On 3 April 33 AD, each hour of daylight was approximately 61 minutes long, so the 9th hour took place between 2:07 PM and 3:08 PM (a Mercury hour).  Traditionally Jesus was said to have died around 3 PM but it could have been as early as 2:07:10 PM, which is exactly when the Mercury hour started.  The lunar eclipse following Christ’s death occurred at 5:17:08 PM.

During the Mercury or 9th hour Leo was rising at Golgotha until about 3 PM when the ASC changed to Virgo, so that the last eight minutes of the 9th hour had Virgo rising.  Because the crucifixion of Jesus established him as a spiritual king of kings, it seems more likely that regal Leo was rising at the time of his death.  Thus, Jesus most likely expired between 2:07 and 3 PM.  A chart for the start of the Mercury hour is symbolically quite striking: 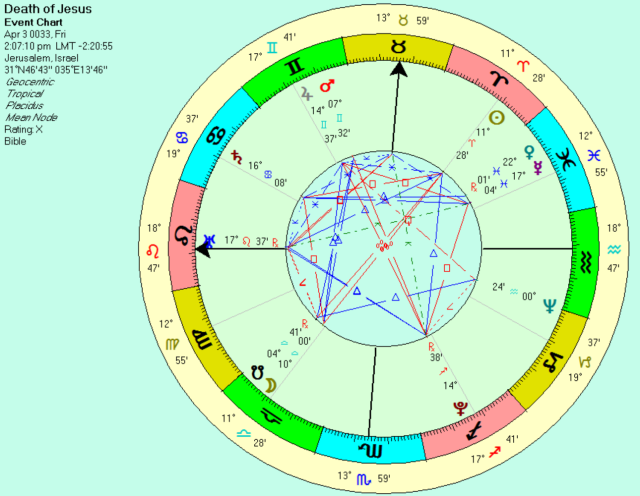 The Death of Jesus, chart for the start of the 9th hour, ruled by Mercury.

Features that immediately stand out are the following:

Much more could be said about this chart.  I think the above symbolism supports the idea that it is a reasonable chart for the start of the Christian religion.

Author of books about astrology and tarot, including TAROT PLAIN AND SIMPLE, HORARY ASTROLOGY, and THE ART OF FORECASTING WITH SOLAR RETURNS.
View all posts by Anthony Louis →
This entry was posted in Astrology, Tarot and tagged Alexander the Great, birth of Christianity, crucifixion, Hierophant, Jesus, King of Kings, pope, Six of Wands. Bookmark the permalink.

1 Response to Alexander the Great and the Crucifixion of Jesus