Today an armed man killed at least 12 people in a shooting at a naval office building in Washington.  The FBI confirmed the shooter’s identity as 34-year-old Aaron Alexis, born 9 May 1979 in Queens, New York.  His time of birth is unknown at this time, so I cast a sunrise chart. 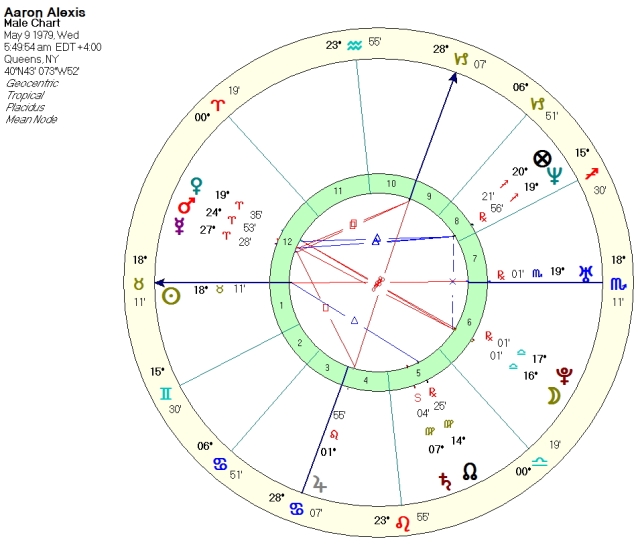 He has a couple potentially explosive aspects in his chart, including Mars opposite Pluto and Uranus opposite his Sun.  The Moon/Pluto conjunction suggests powerful emotional reactions.  The stellium of planets in Aries opposes the Moon/Pluto conjunction in Libra.  This opposition is currently being energized by a square from transiting Jupiter, which rules his sunrise chart 8th house.

Here are typical delineations of the natal Mars/Pluto and Sun/Uranus oppositions from cafeastrology.com:

Mars square or opposition Pluto
You have a tendency to impose your will upon others, which can cause severe problems for yourself when they react in self-defense. You have a hair-trigger temper and may even resort to verbal or physical abuse when upset. “

Sun square or opposition Uranus
The ego is quite large when the Sun is square or opposite Uranus. This is largely due to the fact that these people’s very identities ride on their sense of personal freedom. It can be quite a challenge to get them to do what they don’t want to do, simply because they see any attempts to push them in a certain direction as threatening their freedom.”

Here is the data available so far regarding Mr. Alexis:

Here is a chart for the start of the shootings at the Navy Yard, according to the above data: 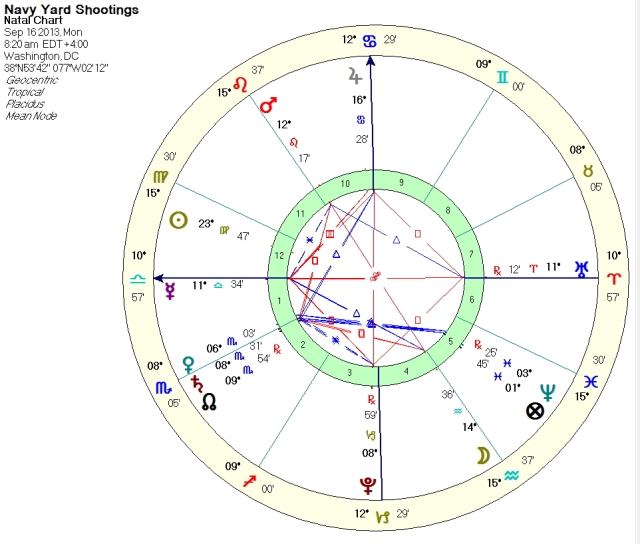 Uranus is highlighted on the DSC as it is in the sunrise natal chart.

Author of books about astrology and tarot, including TAROT PLAIN AND SIMPLE, HORARY ASTROLOGY, and THE ART OF FORECASTING WITH SOLAR RETURNS.
View all posts by Anthony Louis →
This entry was posted in Astrology and tagged Aaron Alexis, Navy Yard Shooting. Bookmark the permalink.