A puzzling horary chart. Any comments? 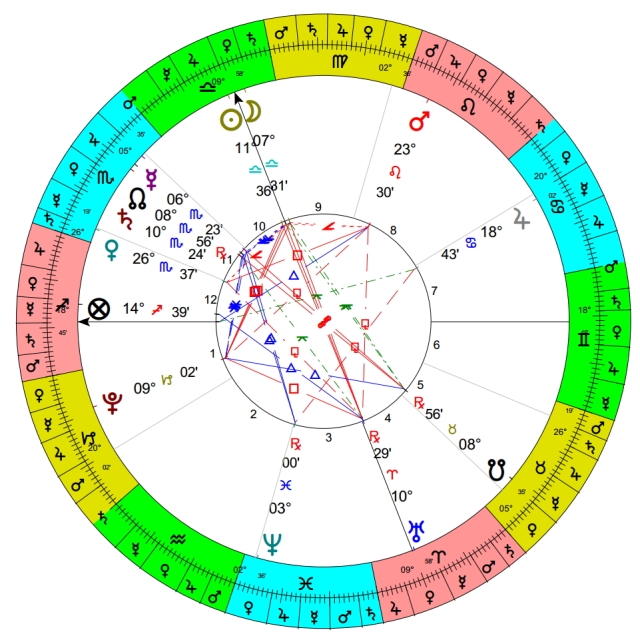 The above chart is updated from the original chart I posted on Oct. 4th from a news report which said he went missing at 12:30 pm.  The more exact time appears to be 12:38 pm, so this time was used in the above updated chart.

I read in today’s news that a family in NYC is looking for an autistic boy who went missing last Friday.  Here is the report from the NY Post:

The family of a 14-year-old autistic boy who cannot speak says he has been missing since Friday.  Avonte Oquendo was seen on a school surveillance video leaving the Center Boulevard School in Long Island City, Queens, around 12:30 p.m. Friday.  His mother, Vanessa Fontaine, appealed to the public to help locate her son. Anyone who may have seen the boy is asked to call the NYPD Crime Stoppers at 800 577-8477.  The family says Avonte has a good understanding of the subway system but isn’t able to communicate verbally.

William Lilly uses horary astrology to locate missing persons.  When the astrologer or querent has no relation to the missing person, he uses the ASC-ruler as significator and cast the chart for the time the person was last seen.  The horary chart above is cast with Regiomontanus houses, as Lilly would have used.

Here are the essential dignities:

Jupiter rules the ASC for the time he went missing and thus is significator of the missing child.  Jupiter is strong in Cancer where it is exalted.  Jupiter is not afflicted by any aspects from the traditional malefics, Mars and Saturn.  These are all favorable indicators.

On the other hand, Jupiter conjoins the cusp of the 8th house and is involved is a wide grand cross formation.   Jupiter lies opposite Pluto in the 1st and is squared by a Sun/Moon conjunction in the 10th.  The Moon in this chart rules the 8th house and the Moon is also a natural signifier of fugitives.  Jupiter is separating from a square to Uranus, which is no within orb.  The Moon applying to oppose Uranus at the cusp of the end-of-the-matter 4th house also looks troubling.

If anyone has thoughts about this chart, please leave a comment below.

“Avonte Oquendo, 14, was last seen at lunchtime at his school in Long Island City on Friday, Oct. 4, police said.  Staff at the Center Boulevard School on 51st Avenue noticed Oquendo was missing when they were gathering the kids after lunch to escort them back to their classes.  Police said Oquendo was later seen on school surveillance video footage leaving the cafeteria around 12:38 p.m.  Police said Oquendo has gone missing before, but not for such a long period of time.  There is particular concern for Oquendo because he is unable to speak.  Police describe the boy as 5-foot-3 and 125 pounds. When he went missing, he was wearing a grey-striped shirt, black jeans and black sneakers.”

Calculating the Arabic Parts for the 12:38 pm chart with Solar Fire produces only four hits:

So the family decided to sue NY City within days of the boy’s disappearance and before there is any trace of the missing child.  If it were my child, I’d be 100% focused on finding him; there would be no time in the day to go visiting lawyers in the hopes of getting a big financial settlement.  In the above chart, Mars rules the 4th house cusp (the family).  Mars occupies Leo in the 8th house of other people’s money.

Human remains were discovered at College Point around 7:15 p.m. Thursday January 16, 2014.   Size 5 1/2 Nike Jordan sneakers and size 16 jeans with the remains match what Avonte was wearing when he disappeared.  The chart for his disappearance had the ASC-ruler Jupiter in Cancer (connected with bodies of water and the oceans) at the cusp of the Regiomonantus 8th house (death).  Mars, the only planet in the 8th house and ruler of the 4th house of endings, was closely connected to the Arabic part of water journeys and the medieval part of death.  The chart cast for the “official” time of his disappearance has Jupiter (ASC ruler) exactly quincunx the ASC — a stressful connection related to 6th and 8th house symbolism.

Author of books about astrology and tarot, including TAROT PLAIN AND SIMPLE, HORARY ASTROLOGY, and THE ART OF FORECASTING WITH SOLAR RETURNS.
View all posts by Anthony Louis →
This entry was posted in Astrology and tagged horary, missing child, missing persons, william lilly. Bookmark the permalink.

30 Responses to A puzzling horary chart. Any comments?