In a previous post I looked at the likelihood that football player Mark Sanchez would need shoulder surgery. On Tuesday October 8, 2013, it was reported that he had his shoulder surgery that evening.  According to Newsday:

Mark Sanchez’s 2013 season is officially over — and most likely, so is his Jets career. In an expected and long-awaited move, the Jets announced the 26-year-old quarterback had surgery on his throwing shoulder late Tuesday.

The most significant transit currently active in his chart is transiting Saturn conjunct natal Venus in Scorpio in his 1st house.  This aspect was exact on Sept. 22, 2013 and is still well within orb.  Venus rules his ASC and also occupies the 1st house, so it symbolizes his body, vitality and state of health.  Venus also rules his natal 8th house of surgery.  Saturn tends to depress and limit whatever it touches.  He is undergoing several troublesome Saturn transits in his first house this year:

Mark Sanchez Saturn transits since May 2013.

The most significant secondary progression is progressed Venus conjunct natal Pluto, also in Scorpio in the 1st house.  This is within 02′ of arc of being exact, and it perfects on Nov. 14, 2013.  Venus again rules his body, and Pluto is connected with surgery and healing.  As a 1st house planet, Pluto also plays a strong role in his state of health.

His primary directions for 2013 are also revealing.  I used Morinus software to calculate them with Placiuds semi-arc, latitude, and the Naibod time-measure.  Both direct and converse directions are shown: 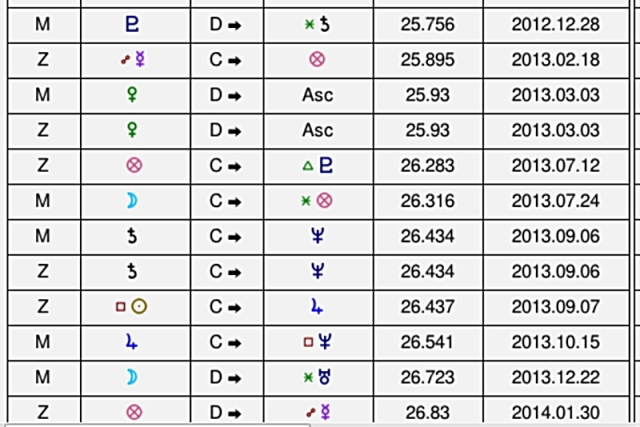 In the period surrounding his shoulder injury and the need for surgery, we see:

With Jupiter being the ruler of his 6th and Neptune, the modern ruler of the 6th, there is a strong emphasis on health concerns during this period.

Author of books about astrology and tarot, including TAROT PLAIN AND SIMPLE, HORARY ASTROLOGY, and THE ART OF FORECASTING WITH SOLAR RETURNS.
View all posts by Anthony Louis →
This entry was posted in Astrology and tagged Mark Sanchez, primary directions, shoulder surgery. Bookmark the permalink.