The Shootings at Sandy Hook a Year Later

December 14, 2013 will be the one-year anniversary of the shootings at Sandy Hook, CT, which took the lives of 20 children and 8 adults.  The person responsible was a young man who killed his mother before arriving at the school, which he entered around 9:30 AM. .  He also took his own life.  I wondered if this event could have been foreseen using astrology.  The branch of astrology that deals with events is called “mundane astrology.”

Methods of mundane astrology are quite ancient and involve the use of charts such as the entry of the Sun into cardinal signs at the beginning of each season (especially the Aries ingress at the start of spring), lunations, eclipses, major conjunctions, transits, etc.  In judging the events affecting populations, a chart of the nation or city is significant.  The chart of a king, queen or leader of a nation is also important.

Sandy Hook is a section of Newtown, CT, which was incorporated on October 11, 1711 according to the town Charter.  I could not find an exact time of incorporation, so I used 12 Noon:

Sandy Hook is part of Newtown, CT, which was incorporated on 11 October 1711.  This chart is cast for Noon.

The incorporation chart has Sagittarius rising.  Jupiter lies in Sagittarius closely conjunct the ASC.  The chart takes place just prior to a New Moon in Libra, with both the Sun and Moon applying to sextile ASC-ruler Jupiter.

The entry of the Sun into Aries occurred on 20 March 2012 at 1:14:25 AM EDT in Newtown, CT.  The ASC was at 13 Sagittarius 49, and ASC-ruler Jupiter was at 10 Taurus 47 in the 5th house of children.  Ingress Jupiter in the 5th squares ‘natal’ Saturn in the 8th house.  The MC was at 3 Libra 45, and three planets were angular, close the the IC: the Sun at 0 Aries 0, Mercury at 2 Aries 57 Rx, and Uranus at 4 Aries 15.  Mercury is a natural ruler of young people and education.  Uranus is a natural ruler of sudden unexpected disruptions.  The Aries ingress chart sets the tone for the year.

The specific ingress in effect at the time of the shootings was the autumnal equinox which occurred on 22 September 2012 at 10:48:58 AM EDT in Newtown, CT.  This chart is more telling. 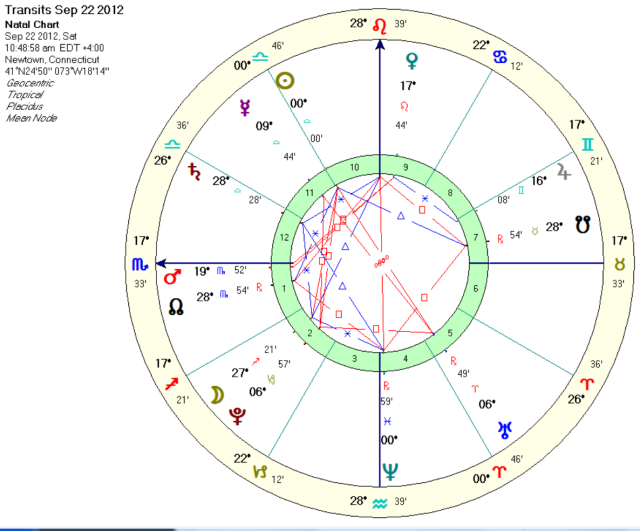 The Libra Ingress at Newtown has Mars ruling the Scorpio ASC rising on the ASC.  This is a powerful angular Mars, whose symbolism will characterize this quarter of the year in Newtown.  The only other angular planet is Neptune, strong in Pisces, at the IC.  The planets Mars and Neptune will be most significant in the fall quarter of 2012.  It is also noteworthy that Libra Ingress Saturn conjoins the 12th house cusp and Ingress Jupiter conjoins the 8th house cusp of the Ingress chart.

A month before the shootings a solar eclipse occurred in the 22nd degree of Scorpio.  Eclipses are usually interpreted as harbingers of major mundane events.  Here is the eclipse chart placed around the Newtown incorporation chart: 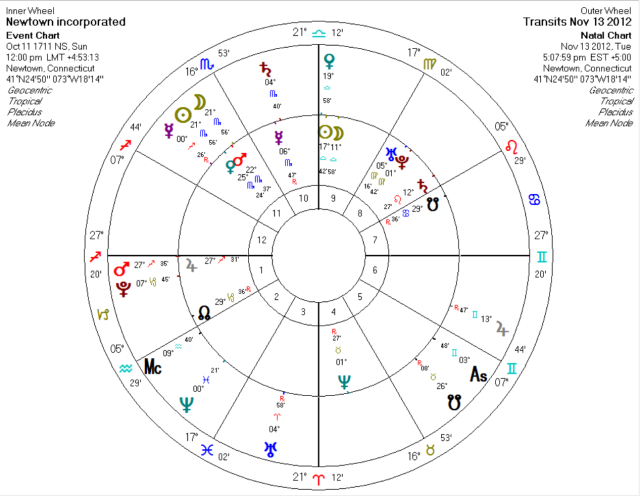 This chart comparison has several striking features.  Eclipse Mars falls almost exactly on Newtown’s ASC-ruler Jupiter and on the ASC.  Newtown’s ‘natal’ Mars is activated by the November 2012 eclipse, which also fall on natal Venus, ruler of the 5th of the town’s children.  Transiting Venus, ruler of the incorporation 5th house, is angular at the MC, bringing Newton’s children into public prominence.

Author of books about astrology and tarot, including TAROT PLAIN AND SIMPLE, HORARY ASTROLOGY, and THE ART OF FORECASTING WITH SOLAR RETURNS.
View all posts by Anthony Louis →
This entry was posted in Astrology and tagged CT, mundane astrology, Newtown, Newtown massacre, Sandy Hook shootings. Bookmark the permalink.