Alex Hribal, the 16 year old who allegedly stabbed his fellow students and a security guard, was born on October 1, 1997 (see entry above “First Name” on bottom left in the attached document).  According to CNN, “A teenage boy wielding two kitchen knives went on a stabbing rampage at his high school in Murrysville, Pennsylvania, early Wednesday (9 April 2014), before being tackled by an assistant principal … Twenty students and a security officer at Franklin Regional Senior High School were either stabbed or slashed in the attack.”  The rampage began about 7:15 AM and lasted about 5 minutes.

Official Police Criminal Complaint against Alex Hribal.  Note the DOB = 01 OCT 1997 on the bottom left of the form.

Below is a NOON Solar Sign chart (time of birth unknown) for Alex Hribal with the transits for 7:15 AM on 09 April 2014 superimposed.  I don’t know the place of birth so I am using the location of his home town.

The upcoming cardinal grand cross will affect his natal Sun/Moon conjunction in Libra.  If he were born later in the day, this natal Moon would be quite strongly involved in the grand cross later this April.  At the time of the incident his natal Sun/Moon conjunction is opposed by transiting Uranus and squared by transiting Pluto.  If he were born around 10 PM, the transiting Uranus square Pluto would be exactly hitting his natal Moon (see next chart in this post).

Alex Hribal has a natal Mars/Pluto conjunction in Sagittarius.  Mars conjunct Pluto is extremely powerful and is sometimes called the “volcanic temper” aspect. His natal Mars/Pluto conjunction was stimulated by a semi-square from transiting Mars and a sesqui-square from the transiting Sun at the time of the stabbings, which occurred not long after the transiting Mars/Sun opposition. Mars is especially prominent this April because of its close proximity to the Earth.  (See the previous post about Mars in the news.)

Here is the boy’s natal chart cast hypothetically for 10 PM which puts his natal Moon directly in contact with the transiting Uranus/Pluto square at the time of the stabbings: 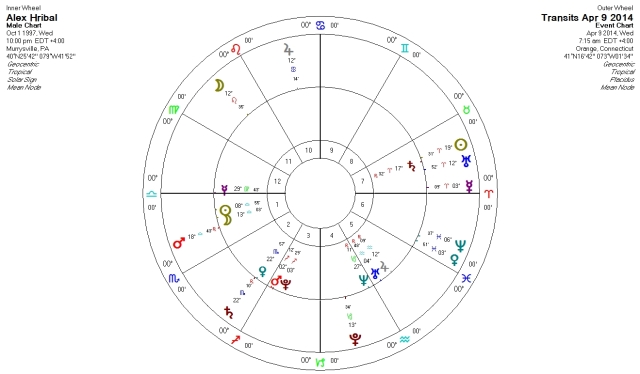 When the birth time is unknown and I wish to look at the solar return for the year, my practice is to cast a sunrise chart and to do the solar return for that chart.  Sunrise is symbolically a significant time of the day because it is the moment when the sun comes over the eastern horizon which signifies a new birth.

Below is Alex Hribal’s sunrise birth chart with the sunrise solar return for this year superimposed.  What is striking is the angular return Pluto on the IC square the angular return Uranus on the DSC with his natal Sun/Moon conjunction on the ASC completing the T-square with these two outer planets. 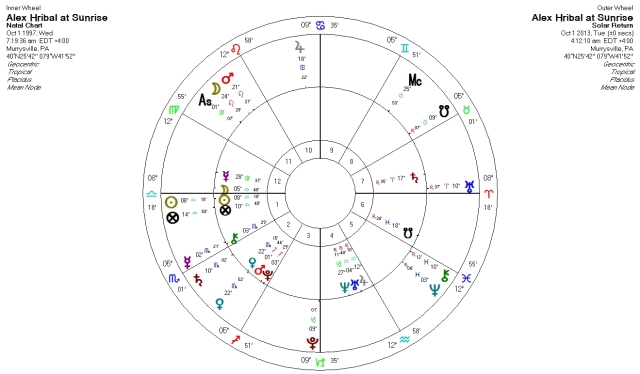 The young man’s sunrise chart with its solar return for this year superimposed. Note the prominence of the return Pluto/Uranus square on the angles with his natal Sun/Moon conjunction completing the T-square formation.

His solar return this year took place at the same time as his Venus return with transiting Mars square to natal Venus, suggesting tension, anger and hurt in close personal relationships and in love matters.  Venus is especially significant because it rules his natal Sun and Moon.  In addition, his potentially explosive natal Mars/Pluto conjunction in Sagittarius is being stressed by a close square from return Neptune in Pisces.

Addendum (11 April 2014): Michele Adler left me a message about an article in which she outlines how 8 degrees of the cardinal signs “appears with impressive regularity in progressions and directions during challenging turning point times.  A  common theme is leadership challenge and removal, or gain of power.  It can be seen frequently in job layoffs, new career directions, or in the loss or gain of a leadership role.  Related to this is the fact that the 8 degrees of Aries has appeared by transit, progression or direction in all four US presidential assassinations, and in all but one of the 13 attempted presidential assassinations. However, it would be wrong to call 8 Cardinal an assassination degree: it is, more accurately, a turning point degree, which contains an embedded challenge, and it should be noted that more US presidents escaped assassination attempts under it than were actually killed.  The turning point indicated by 8 Cardinal frequently involves confrontation, yet occasionally a triumph after a long period of work and failure.”  (italics mine).

Author of books about astrology and tarot, including TAROT PLAIN AND SIMPLE, HORARY ASTROLOGY, and THE ART OF FORECASTING WITH SOLAR RETURNS.
View all posts by Anthony Louis →
This entry was posted in Astrology and tagged 8 degrees of cardinal signs, Alex Hribal, Franklin Regional Senior High School, Mars conjunct Pluto, Mars opposite Saturn, Michele Adler, stabbings. Bookmark the permalink.