Using Tarot to Delineate the Ascendant

Recently Zanna Starr posted a review of Tarot Beyond the Basics in which she commented that she was interested in using the tarot to delineate the Ascendant of her natal horoscope.  For those who don’t have the book I thought it would be useful to provide an example of the method on this blog.  Let’s take a well-known natal chart which is rated AA in the Roden system, the chart of Barack Obama. Here is it with Placidus Houses: 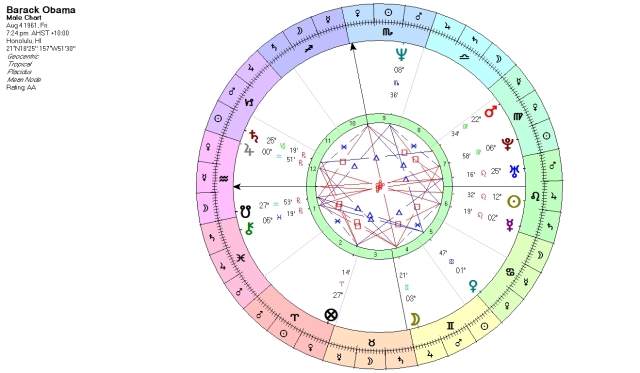 In many ways the Ascendant is the most important point in the natal chart.  The Ascendant is specific to the individual’s specific time, date and place of birth, and thus it becomes a symbol for that person’s unique individuality.  A note in Wikipedia states that the Ascendant is “considered to be of great significance in all schools of astrology because it in effect serves as the filter through which everything in a horoscope — including the Sun and Moon — is expressed. Most astrologers believe that the Rising Sign exerts an influence equal to or more powerful than the Sun and Moon. In Jyotish, the ascendant is without question the most individual and defining element in the chart.”

The Golden Dawn, whose system I follow in delineating the chart with the tarot, used the decans of the 12 signs of the zodiac.  Briefly, each of the twelve signs is divided into three decans (10-degree segments), making a total of 36 decans in all as we travel a complete circuit around the zodiac.

A typical delineation of Aquarius rising from CafeAstrology.com states:

“Most people with this Ascendant are quite friendly and likable. Their personality quirks generally go over quite well with others. They generally give others quite a bit of freedom — accepting, as a rule, people from all walks of life as equals.  And, their somewhat cool and detached curiosity about all that goes on around them appeals to most.  Curiously, Aquarius rising people can be a little standoffish while also coming across as humanitarian and kind.”

According to the Golden Dawn, each point in the zodiac is associated with certain tarot cards including cards from a Major Arcanum, a Court card, and a Pip card numbered between 2 and 10.  A useful website to look up these correspondences is http://supertarot.co.uk/timing-events/.  (Thanks to Paul Hughes-Barlow for this site.)  If you look up Obama’s ASC on Paul’s site, you will see that his ASC of 18 Aquarius corresponds to the Star, the King of Swords, and the Six of Swords — all cards related to the mental/communicative element Air (coded in yellow on that site).

If we lay out these three cards, we have a 3-card tarot spread which describes something fundamental about Barack Obama’s personality and basic motivation in life:

A possible delineation of this spread is that Mr. Obama is an intellectual, idealistic and humanitarian leader who rules with his head and desires to lead the nation to better shores.  The King of Swords often represents professionals connected with the law.  (No doubt his enemies in Congress would find some way to include Benghazi in this delineation.)

If we want more details about his ASC and basic motivations, we can extend the spread by delineating his ASC-rulers (Saturn as traditional ruler, Uranus as modern ruler, and Mercury a decan ruler) in a similar manner.

This method can be used for any planet or point in the horoscope.   See Zanna Starr’s blog for an example of how she uses this technique to delineate her own natal chart.

ADDENDUM:  In July of 2014 I did a presentation on this topic for the Massachusetts Tarot Society.  Here is a link to Carolyn Cushing’s comments on the presentation and her application of the method to her own birth chart:  http://artofchangetarot.com/2014/07/07/astro-prompts-for-tarot-self-knowledge-work/

Author of books about astrology and tarot, including TAROT PLAIN AND SIMPLE, HORARY ASTROLOGY, and THE ART OF FORECASTING WITH SOLAR RETURNS.
View all posts by Anthony Louis →
This entry was posted in Astrology, Tarot and tagged delineating the ASC, Obama. Bookmark the permalink.

4 Responses to Using Tarot to Delineate the Ascendant