The Saudi blogger Raif Badawi (born 13 January 1984 in al-Khubar) received 50 lashes recently for his “crime” of asking fellow Saudis to use their minds to think rather than living in fear of fundamentalist religious authorities who put out contracts to kill people who disagree with them. The primitive Saudi government, spurred on by such rigidly dogmatic religious leaders, wants to inflict a total of 1000 lashes because Badawi values secularism and the open debate of ideas. This kind of behavior by a theocratic government teaches its citizens that the resolution of conflict likes in torturing or killing those who disagree with your views and sets the stage for terrorism. Let us not forget that the fundamentalist parochial schools of Saudi Arabia produced Osama bin Laden.

In Badawi’s own words:

“As soon as a thinker starts to reveal his ideas, you will find hundreds of fatwas that accused him of being an infidel just because he had the courage to discuss some sacred topics. I’m really worried that Arab thinkers will migrate in search of fresh air and to escape the sword of the religious authorities. … States which are based on religion confine their people in the circle of faith and fear. … Muslims in Saudi Arabia not only disrespect the beliefs of others, but also charge them with infidelity to the extent that they consider anyone who is not Muslim an infidel, and, within their own narrow definitions, they consider non-Hanbali [the Saudi school of Islam] Muslims as apostates. How can we be such people and build … normal relations with six billion humans, four and a half billion of whom do not believe in Islam.” 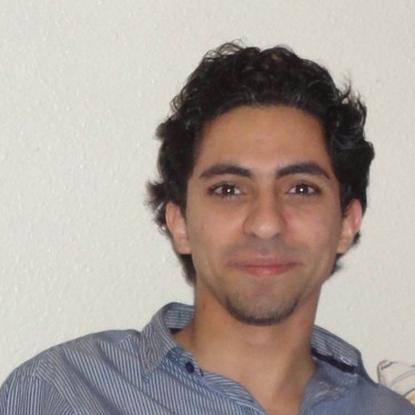 Let’s look at the chart of Mr. Badawi in the context of the current abuse of human rights that he is suffering at the hands of the Saudis. His time of birth is unknown, so I cast a chart for Noon at this birthplace and used solar sign houses.

A striking feature of this chart is the close conjunction of Mars and Pluto in Scorpio. Mars is the traditional ruler of this sign, and Pluto is considered its modern ruler.  This Mars/Pluto configuration suggests a person of great intensity and determination. He is willing to fight like a dog for what he believes in.  The pairing of Mars and Pluto suggests a person is is prone to domination and violence either as a perpetrator or a victim. Surely his current abuse by the Saudi government is a manifestation of his natal Mars/Pluto conjunction.

Natal Saturn in Scorpio opposing his Moon in Taurus suggests that his emotional life and desire for nurturing (Moon) is thwarted by harsh, severe figures of authority (Saturn in Scorpio). He will not be nurtured by the Saudi government.

Transiting Saturn, having recently crossed into Sagittarius, highlights the conflict between the openness and religious tolerance of Sagittarius and the fundamentalist religious traditions of his culture. Transiting Jupiter is currently in trine aspect to his natal Sagittarius stellium. With luck, this trine will have a protective influence on the life of this victim of state oppression.

All civilized countries have condemned the backwards stance of the theocratic Saudi government. One can only hope that the pressure of world opinion will have some influence on moving Saudi Arabia away from its barbarism toward civilization.

Author of books about astrology and tarot, including TAROT PLAIN AND SIMPLE, HORARY ASTROLOGY, and THE ART OF FORECASTING WITH SOLAR RETURNS.
View all posts by Anthony Louis →
This entry was posted in Astrology and tagged Badawi, flogging, Saudi Arabia, terrorism, theocracy. Bookmark the permalink.