Sadly, Formula One driver Jules Bianchi has died, nine months after suffering severe head trauma in a crash at the Japanese Grand Prix. It is always instructive to study the astrological charts of such dramatic incidents.  Here is the relevant data: 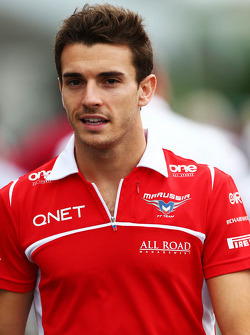 Here is the natal chart with Placidus houses:

A striking feature of this natal chart is the stellium in Leo, suggesting a person who is outgoing, confident, enthusiastic and in love with enjoying life. Venus rules his 10th house (career) and his 3rd house (cars, short-distance travel), thus linking transport to professional matters. Mercury, messenger of the gods and a symbols of travel, lies on the nodal axis, giving it a special prominence.  In addition, Venus lies in the 2nd house of income, so that he might earn money through matters related to 3rd house transport. Jupiter rules his 8th house (death) and closely opposes Uranus in the 5th house of sporting events and recreational activities.  Perhaps this Jupiter-Uranus opposition is a marker of a potential cause of death while engaging in a recreational or sporting event. Pluto, a planet of power and intensity, is angular at the IC, a symbol of conditions at the end of life.

Here is his solar return for Nice, France in August of 2014:

Solar Return in effect at the time of the 2014 crash.

This is an important years (Aug 2014 – Aug 2015) because the angles of the solar return (SR) repeat the angles of the natal chart. The Sun rules the SR ASC and occupies the SR 12th house of self-undoing as it does natally. The main these of this year, therefore, has to do with confinement, restrictions and limitation often brought about by one’s own actions. Jupiter, which rules the SR 8th cusp as well as the natal 8th cusp (death), conjoins the unfortunate SR 12th house cusp, a signal of possible danger due to personal action.  Pluto in the SR 5th of sporting events forms a stressful quincunx to the Sun.  Mars, which rules the SR 4th cusp (end of life), lies in the SR 3rd of automobiles and short-distance travel and squares very closely the SR Jupiter/Mercury conjunction at the cusp of the 12th of undoing. In addition, Mars rules the 9th cups of foreign travel and activities done abroad.  SR Uranus on the cusp of the 9th house has a similar meaning. All in all, this SR chart warns of the risk of a serious accident while driving or pursuing recreational or sporting activities during this solar return year.

Superimposing the SR chart on the natal chart reveals some additional symbolism: 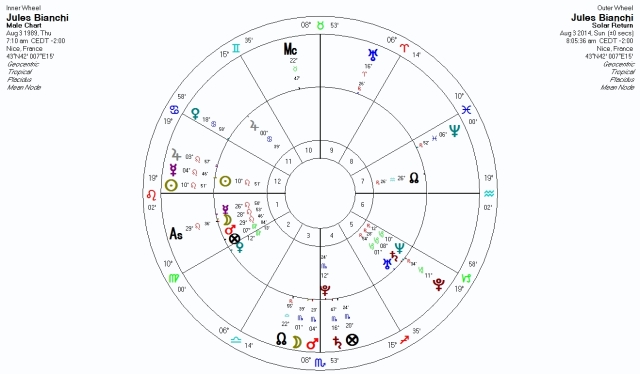 Prominent in this superimposition is the SR ASC in the natal 1st house closely conjunct the natal Moon/Mars conjunction. Natally, the Moon rules his 12th house of undoing, restriction and confinement — the major theme of this year.  The conjunction of the SR ASC with natal Mars adds the force and aggressiveness of Mars to the mix.  Mars is associated symbolically with iron, automobiles and injuries due to force. In addition, we see SR Uranus in the natal 9th of foreign matters closely quincunx SR Saturn in the natal 4th of end of life matters. SR Venus, ruler of the MC (career), closely conjoins the natal 12th cusp of undoing and confinement.

Finally, a look at his lunar return which was in effect at the time of the accident is also quite telling.  The lunar return for this period occurred on 21 Sep 2014. Here is the lunar return chart with the natal chart superimposed.

Lunar Return at the time of the accident with natal chart superimposed.

In the lunar return (LR), his natal Saturn/Neptune conjunction comes to the ASC where it conjoins the return Pluto. This configuration is being squared by natal Pluto in the LR 10th. Transiting Pluto conjunct natal Saturn, especially at the ASC, suggests a powerful confrontation with hard reality. His natal ASC closely conjoins the LR 8th cusp. Return Pluto is almost exactly quincunx his natal Sun.  In addition, return Saturn in the LR 10th almost exactly squares his natal ASC at the LR 8th cusp. Finally, just eyeballing the superimposed chart one can see a prominent stellium of seven planets plus the ASC in the 8th house of loss, surgery, dramatic change and death.

Author of books about astrology and tarot, including TAROT PLAIN AND SIMPLE, HORARY ASTROLOGY, and THE ART OF FORECASTING WITH SOLAR RETURNS.
View all posts by Anthony Louis →
This entry was posted in Uncategorized. Bookmark the permalink.