The Zodiacal Releasing of a Pleasant Surprise

Last year I wrote about the astrology of a pleasant surprise.

To quote that post:
“Not long after my horary book was first published I attended the United Astrology Congress at the Hyatt Regency Crystal City in Washington, D.C. from April 16 to 21, 1992. At the conference I was surprised and pleased when I received a “Regulus Most Promising Newcomer Award” at the opening banquet. I don’t recall the exact date of the award during the April 16-21 period. Judging by the programs of recent UAC conference, the awards banquet was probably Monday evening, 20 April 1992.”

Recently I’ve been going through the most recent lecture about zodiacal releasing which Chris Brennan posted in his online Hellenistic Astrology Course.  Zodiacal releasing is a time-lord technique for forecasting described by Vetius Valens. You begin by measuring time from the natal sign which contains your Part of Spirit.  Each zodiacal sign covers a certain number of years and is divided into subperiods assigned in sequence to the signs of the zodiac.  If you complete an entire cycle of the zodiac, you jump to the sign opposite the one that started the period; this is called “loosing of the bond.”  Such “loosing of the bond” (LB) periods often mark significant transitions in one’s professional life or life direction.

When I tried this technique in my own chart, I discovered that there was a loosing of the bond at the time I submitted a proposal to Llewellyn to write a horary book (August 1989) and again when the book was published (January 1991).  Finally, there was a loosing of the bond during the week that I unexpectedly received an award for the book at the 1992 UAC Conference.

The following table shows the loosing of the bond, marked (L), in August 1989 (book proposal submitted) and January 1991 (book published). 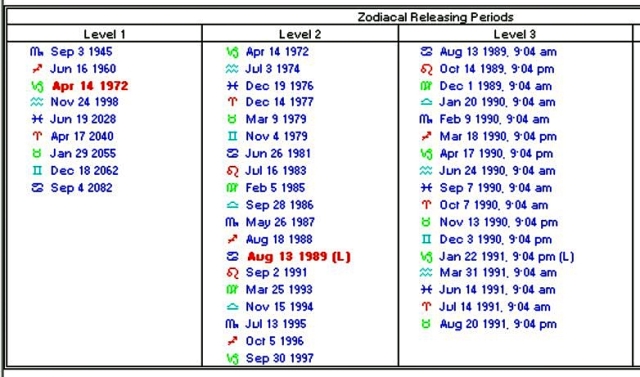 The next table shows the loosing of the bond, marked (L), on Level 4 for the UAC Conference in April 1992 when I received the award, which occurred on April 20, 1992 as far as I can recall.

The level 4 loosing of the bond occurs from April 18 – 22, 1992, in the sign Cancer which is my Whole Sign 10th house of career.  This corresponds exactly to the time I received the award.  The precise timing is quite amazing.

It occurred to me to add a comment about annual profections for the date of the award: Monday, 20 April 1992.

At that time I was in a Leo/11th house annual profection year.  There are four planets in Leo: Moon, ruler of 10th of career and public recognition; Venus, ruler of the Ascendant; Mercury, ruler of the 9th of publishing and of the Part of Fortune; and Pluto.

I was in a Pisces/6th house profection month. Jupiter, the ruler of Pisces, is angular in the 1st house and is the benefic of the sect in favor.

Finally on 20 April 1992, I was in a Cancer/10th house daily profection.  The symbolism fits well with the event that occurred. 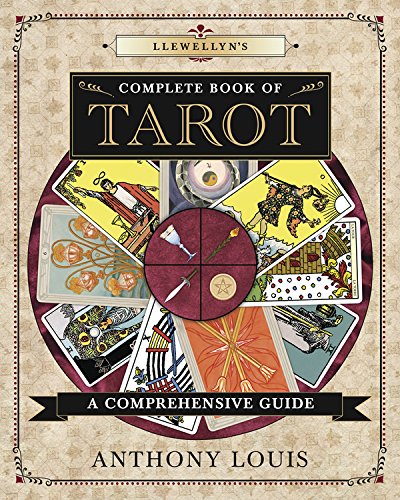 Author of books about astrology and tarot, including TAROT PLAIN AND SIMPLE, HORARY ASTROLOGY, and THE ART OF FORECASTING WITH SOLAR RETURNS.
View all posts by Anthony Louis →
This entry was posted in Astrology and tagged chris brennan, Hellenistic astrology, loosing of the bond, time lord, zodiacal releasing. Bookmark the permalink.

3 Responses to The Zodiacal Releasing of a Pleasant Surprise