Sidney Kimball Bennett (Wynn) and the Failure of Progressions and Directions

Sidney Kimball Bennett, born February 10, 1892, in Chicago, was a notable U.S. astrologer of the early twentieth century.  He published Wynn’s Astrology Magazine in the thirties and forties and is known today primarily for his method of forecasting called the Wynn Key Cycle.

Wynn’s claim to fame in the 1930’s was a 1932 prediction he made in the NY Daily News , when he forecast a week of immense financial turmoil for early March of 1933.  On March 4, 1933, President Franklin D. Roosevelt was inaugurated.  One of his first acts, in response to many bank failures and “runs” on banks, was to proclaim a “bank holiday,” closing all the banks in the United States from March 6th until March 13.  There was great financial turmoil and uncertainty until the banks reopened on March 13th and depositors began to return their cash to the ailing institutions. Interestingly, on March 8, 1933 (two days after the start of Roosevelt’s bank holiday) the recently discovered dwarf planet Pluto in Aries by transit made an exact square to Uranus in Cancer (the Whole Sign 2nd house of money of the USA Gemini-rising chart).  I don’t know whether Wynn had begun to use Pluto in his charts at that time.

According to The Free Dictionary Encyclopedia:

“In The Key Cycle, Bennett [Wynn] relates that a number of his clients had complained that his prognostications, based on the techniques of progressions and directions, had failed. He regarded these failures as being traceable to mistaken birth times. These faulty predictions struck home, however, in May 1926 when he failed to foresee an accident in which he was almost killed by a hit-and-run driver.  At the time, Bennett was traveling in California on a business trip during which he was attempting to take advantage of a ‘marvelous combination of progressions’.  However, from a business standpoint the trip was a total failure.  Reflecting upon these events and calling to mind his clients’ complaints, he was persuaded to give up progressions and directions.”

I was surprised upon reading this passage about Wynn because life-altering events such as a major accident with a near-death experience almost always show up astrologically using traditional techniques.  Most likely such an event would involve Mars (force), Uranus (unexpected disruption) and the 8th house (near-death experiences).  I felt that Wynn must have missed a significant progression or direction when he did his personal prognostications for 1926, so I decided to investigate.

According to astro.com, Wynn was born on 10 Feb 1892 at 9 AM in Chicago.  Here is his natal chart with Whole Sign Houses. 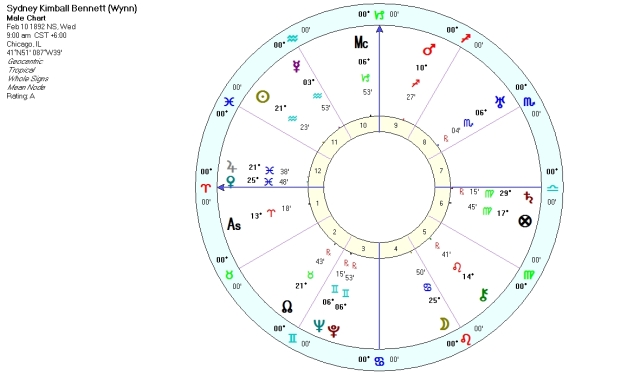 We must begin by determining whether a serious car accident is revealed as a potential in his birth chart.  Local transport is a matter of the 3rd house, which contains a Neptune/Pluto  conjunction in Gemini (a travel sign).  This Neptune/Pluto conjunction is opposed by Mars in the 9th house of long-distance travel (the accident occurred in California, far from his Chicago birth place).  In addition, the 3rd house Neptune/Pluto conjunction lies in 6 degrees of Gemini, which is quincunx Uranus in 6 degrees of Scorpio in the 8th house of death.  The quincunx carries and 6th and 8th house connotation.  The natal chart appears to carry the potential for a life-threatening accident while traveling.

Now let’s look at his birth place Solar Return for 1926, the year of the accident.  At the time, Wynn was using Placidus houses, so I have cast the 1926 return in that house system. 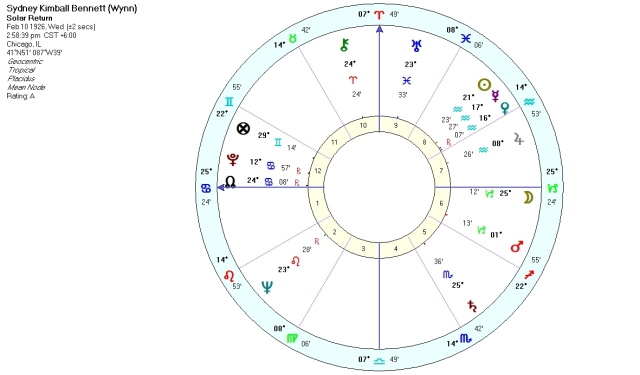 In the 1926 Solar Retutn Wynn’s Sun lies in the return 8th house of death.  The house position of the Sun in a Solar Return chart indicates a major theme for the year.  The Sun is conjunct return Mercury, which rules the 3rd house of local transportation in both the natal and the return charts.

Return Saturn, the traditional ruler of the return 8th of death, forms a square aspect to the return Sun/Mercury conjunction in the 8th, warning of a serious potentially life-threatening (8th house) problem while traveling.  Mercury also rules the return 12th house of confinement and undoing, which includes hospital stays whereas in the natal chart Mercury rules the 3rd of local travel and the 6th of bodily afflctions.

Furthermore, the Moon rules the return Ascendant and almost exactly opposes the degree of the Ascendant, which rules the body and the vitality of the individual.  The transiting ASC-ruler opposing the degree of the Ascendant indicates some difficulty for the vitality of the organism.  In Hellenistic astrology the Moon is a general signifier of the body.  In Wynn’s natal chart, the Moon rules the 4th house of endings and the grave.

If we superimpose his natal chart on his solar return, we see the following. 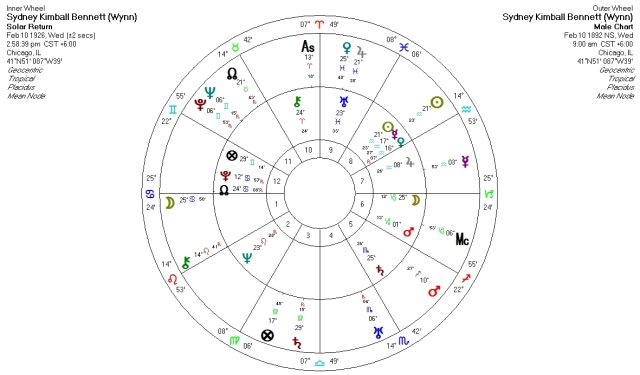 There is an emphasis on the 6th, 8th and 10th houses with natal MC in return 6th, natal Sun in return 8th, and natal Ascendant in return 10th.  The accident occurred while on a business trip in California.

Most striking, however, is the natal Moon opposite the return Moon across the horizon.  As mentioned the Moon is a general signifier of the body.  She rules the 4th of endings in the natal chart and the Ascendant (body and vitality) in the return chart. 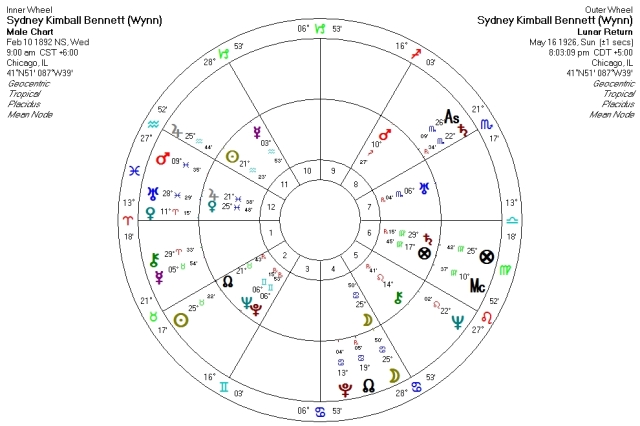 Here are the key features of the Lunar Return for the day of the hit-and-run:

Wynn said that his directions for this period did not reveal the event.  Let’s look at his Solar Arc Directed chart superimposed on his natal chart for May 18, 1926.  (In his book on the Key Cycle Wynn says the hit-and-run accident occurred at 9 PM in Merced, California on 18 May 1926). 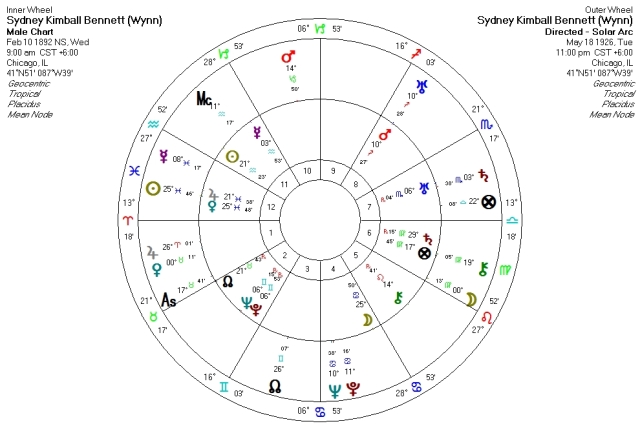 What stands out is that solar arc directed Uranus is exactly conjunct natal Mars (01′ orb) in the Placidus 8th (Whole Sign 9th house of distant travel) on May 18th of 1926.  I cannot imagine a more compelling symbol for a life-threatening hit-and-run accident than a Uranus/Mars conjunction in the 8th of death.

At the same time this Uranus/Mars conjunction is quincunx the directed Neptune/Pluto conjunction in the 4th of endings and the grave.

In addition, the solar arc directed MC is exactly quincunx directed Pluto in the 4th of endings; and in modern astrology Pluto (god of the underworld) would be considered a ruler of the natal 8th of death.

Finally, the directed Sun almost exactly conjoins natal Venus in the 12th house of undoing and confinement.  Venus is exalted ruler of Pisces, which is intercepted in the 12th.  Venus also rules the 2nd of income, suggesting a costly period of confinement in a hospital following the accident.  On May 15th directed Venus in the 1st was exactly quincunx natal Saturn in the 6th, and at the time of the incident this aspect was within one degree of orb.

If we direct the natal chart by the Placidus semi-arc method of primary zodiacal directions using the Kündig key (which I discussed in a recent post), we get the following primary direction during the period from April 1 through June 1 of 1926:

In summary, it seems that Wynn must not have looked at his Solar Arc directions or his Lunar Returns for May of 1926 when he did his personal forecasting for the year.