A blast from the past

Recently I was searching for something about horary astrology in google and came across an old horary chart which I had interpreted in 1986.  In the mid-1980s I made the acquaintance of astrologer Celeste Teal who went on to write several well-received books about astrology.  In 1986 Celeste asked me to interpret a horary chart for her question about whether she would have success as an astrology writer.  Here is the chart (6 April 1986, 11:10 AM, 40N33, 85W39). 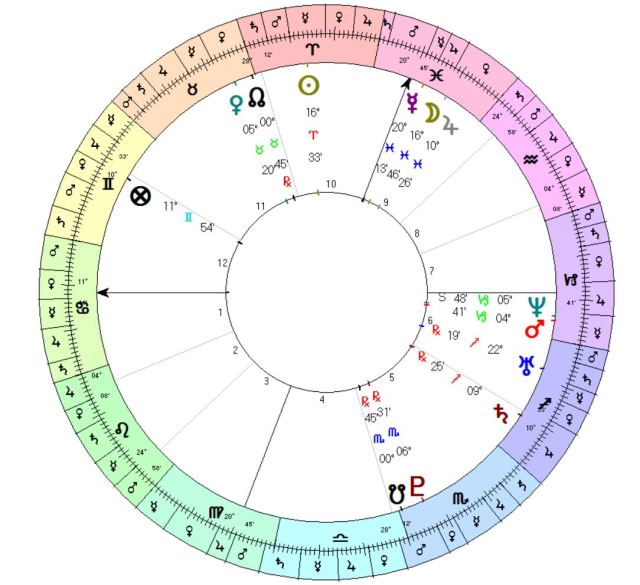 This is my 1986 interpretation of the chart, taken from Celeste’s website Moon Valley Astrologer.  I’m grateful to Celeste for having preserved it and for posting on her site after all these years.  In looking back, I think I must have been impressed by Jupiter, the Moon and Mercury, all in Pisces (ruled by Jupiter, which is exalted in the Ascendant and almuten there), in the 9th Whole Sign house of astrology and publishing.  This is what I wrote to Celeste back in 1986:

Using traditional methods and the Regiomontanus house system used by Lilly, the chart has 11 Cancer 42 rising. With natal Uranus conjoining the horary Ascendant, this is a significant chart and certainly relates to your career in astrology. You are shown by the Moon, and by Almuten Jupiter.

In your chart, Jupiter was Almuten of the degree rising, and being most dignified there was an excellent Significator for a question about publishing.

Both Moon & Jupiter occupy the 9th of publishing, a favorable indicator. Carol Wiggers calls this “emplacement” since your Significators are in the house of publishing. Jupiter applies to trine the Ascendant.

Moon has just completed a conjunction with Jupiter and goes on to conjoin Mercury. This may be considered a “translation of light” in which the Moon takes the light of Jupiter and carries it to Mercury. The point of this is that the meaning of the aspect(s) becomes a triple conjunction: Moon conjunct Mercury conjunct Jupiter all in the 9th of publishing, a very good omen.

In addition, all three planets in the 9th apply to conjoin the career MC. Jupiter will get there in 10 degrees, suggesting some significant success in 10 years (Jupiter is cadent and mutable) — so a major book contract in 1996? Moon and Mercury arriving there soon suggest publications of articles or less significant material.

Jupiter also squares the Part of Fortune in Gemini in the 12th, a good aspect for a writer of occult subjects. (Lilly would say that this square in signs of short ascension is similar to a sextile).

Your hopes & wishes are shown by the 11th ruled by Mars and Venus. Both Venus & Mars apply favorably to aspect Jupiter, ruler of the 10th of career. This confirms that you will achieve your wish to become a writer.

Saturn, ruling the 9th of publishing (Aquarius, traditional ruler), is retrograde near the 6th cusp, so the process will be slower than you would like and require a lot of effort.

Finally, the dispositor of the Gemini Part of Fortune in the 12th (work done in a quiet setting, like writing) is Mercury which exactly conjoins the MC, another very favorable sign.

I think Lilly would have used your chart as an example of “dwelling in houses plus translation of light by the Moon” (see pages 118 -119 of my horary book). In your chart, the Ascendant ruler and Almuten both occupied the 9th of publishing and the Moon translated the light from Jupiter to Mercury, reenergizing that earlier Mercury-Jupiter conjunction in the 9th, which is an excellent omen for writing a successful book.

Since Jupiter represented you, its conjunction with the MC symbolized a major career event related to publishing in 1996. Best wishes, Anthony.

Celeste commented in her post: “1996 is the year I did the major work on my first book and submitted a proposal. This was followed by the publishing contract – extremely accurate.”

Since her first publishing contract in 1996, as predicted by her horary chart ten years earlier, Celeste has gone on to write several highly acclaimed astrology texts.  Here is a link to her author’s page on amazon.com.

Author of books about astrology and tarot, including TAROT PLAIN AND SIMPLE, HORARY ASTROLOGY, and THE ART OF FORECASTING WITH SOLAR RETURNS.
View all posts by Anthony Louis →
This entry was posted in Astrology, horary and tagged Celeste Teal, success as author. Bookmark the permalink.

2 Responses to A blast from the past