Another example of 12th parts in horary

The ancient Babylonians and the Hellenistic astrologers used twelfth-parts (dodecatemoria) of the signs of the zodiac.  The idea is that each sign can be projected onto the entire zodiac circle, with each 2.5 degrees (twelfth-part) of a sign being projected onto an entire sign of the horoscope wheel.

Masha’allah in writing about “hidden things” noted that the twelfth-part of the Ascendant of a horary chart would reveal the querent’s concerns and intentions in consulting the astrologer.  He gave an example of the Ascendant in the 12th degree of Aries, which lies in the fifth 2.5 segment of Aries.  Hence the 5th Whole Sign house from Aries, which is Leo, reveals the querent’s concern or intention.  In his example there were no planets in Leo, so he looked to the ruler of Leo, the Sun, which happened to fall in Libra in the 7th Whole Sign house from Aries.  Masha’allah concluded that the querent wanted to know about a child (5th house) who was seeking the querent’s wife (7th house).  Had a planet been located in Leo, Masha’allah would have incorporated the meaning of that planet into his interpretation.

I recently came across a horary done by Olivia Barclay in which she argued in favor of her belief that, in horary charts, the 3rd house rather than the 2nd rules automobiles. Most traditional astrologers view cars as movable possessions, which are assigned to the 2nd house. Local trips you take in your car are matters symbolized by the 3rd house, but the car itself belongs functionally to the 2nd house.. 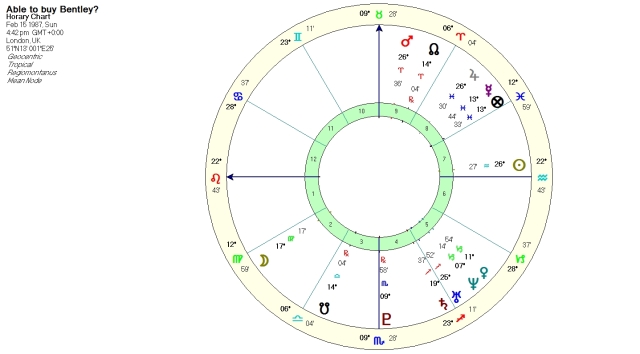 It is a Sun day during a Saturn hour.

The querent is signified by the Sun (Leo Ascendant) and co-ruler Moon. The Sun resides in his detriment in Aquarius and opposes the Ascendant. The Moon in Virgo in the 2nd house of the querent’s money is peregrine (without essential dignity). The debilitated state of the querent’s rulers, especially the Moon in his house of money, suggests that he may not be able to afford the Bentley.

The Ascendant at 22 Leo 43 has its twelfth-part in Taurus, the sign on the MC. Since this is a question about making a purchase, the 10th house represents the price of the Bentley. The querent is concerned about the high price. There are no planets in the 10th, so Masha’allah tells us to consider the ruler of the 12th-part (Taurus), which is Venus in Capricorn in the 5th. Thus, the querent is concerned about the high price of something he loves (5th house). Capricorn describes Venus in the 5th, which signifies the thing that he loves and wants to buy, namely an old and venerable (Capricorn, ruled by Saturn) 1937 Bentley. The 5th house is associated with honey-colored things, so maybe the Bentley is honey-colored.

Barclay argued that because Venus was in the 5th house rather than Mercury, then the 3rd house (ruled by Venus in this chart) must signify cars.

Will the querent be able to buy the car? To answer this question we must look at the ruler of the car, which is Mercury because Virgo is on the cusp of the 2nd house of movable possessions. Interestingly, Mercury in Pisces conjoins the Part of Fortune (it is the car he treasures), but both are in the unfortunate 8th house which is a place of loss. Mercury (the car) is thus in aversion (inconjunct, disconnected) to the Leo Ascendant and the ruler of the Ascendant (the Sun). This failure of Mercury (the car) to connect with the Ascendant (the querent) is another argument that he will not be able to buy the car.

Is there any aspect forming between Mercury (the car) and the querent’s rulers (the Moon and the Sun)? No. The Sun is in aversion to Mercury, and the Moon is well past an opposition to Mercury. The querent and the Bentley do not come together in this chart.

Is there any agreement between the buyer (querent, Moon and Sun) and the seller (Saturn, Aquarius on 7th cusp)? No.  The Sun is separating from a sextile to Saturn, and the Moon (buyer) applies to Saturn (seller) by a square without reception. The Moon square Saturn without reception indicates that the two parties will not reach an agreement.

In short, Olivia Barcley’s argument about the 3rd house signifying cars in horary charts is without merit. The traditional teaching of the 2nd house ruling movable possessions still stands, and the method of 12th parts in horary from Masha’allah accounts for the honey color of the desired Bentley.

All original text in these posts is copyright Anthony Louis, 2017.

Author of books about astrology and tarot, including TAROT PLAIN AND SIMPLE, HORARY ASTROLOGY, and THE ART OF FORECASTING WITH SOLAR RETURNS.
View all posts by Anthony Louis →
This entry was posted in Astrology, horary and tagged automobiles, Masha’allah, Olivia Barclay, second house, twelfth part. Bookmark the permalink.

1 Response to Another example of 12th parts in horary