Blackouts across the USA

Today (Friday, 21 April 2017) there was a series of blackouts in cities across the USA. According to RT.com, “power outages hit Los Angeles, New York and San Francisco, leaving commuters stranded and traffic backed up Friday.” The first of these power outages occurred in New York City at 7:20 AM, disrupting the morning subway commute for countless New Yorkers.  Here is the chart for that moment: 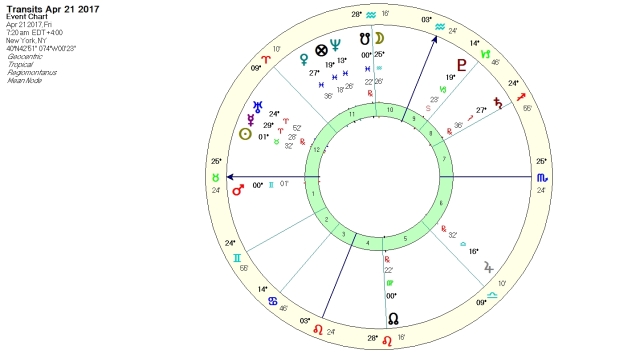 It was a Venus day during a Mercury Rx hour.

Venus rules the Taurus Ascendant, and Venus in Pisces is exactly square Saturn in Pisces near the cusp of the 8th house of death. In fact, the Venus/Saturn square perfected at about 7:09 AM in NYC, just 11 minutes before the blackout.

Furthermore, Mars (ruler of the 12th house of undoing) made it ingress into Gemini at 6:32 AM in NYC.  As Mars enters Gemini very close to the Ascendant of this blackout chart, the red planet squares the Moon’s Nodes.  Mars is a general signifier of energy, and Mercury (ruler of Gemini) has to do with the transmission of nervous impulses, which is electrical in nature. Mercury is currently in retrograde motion.

The contra-antiscion of the Moon’s South Node conjoins Mercury.  This aspect has the same significance as the South Node (of the constricting, darkening and limiting nature of Saturn) opposing Mercury Rx (the flow of electrical impulses in the wrong direction).

It is fascinating to see how astrological symbolism plays out in real-world events.

Author of books about astrology and tarot, including TAROT PLAIN AND SIMPLE, HORARY ASTROLOGY, and THE ART OF FORECASTING WITH SOLAR RETURNS.
View all posts by Anthony Louis →
This entry was posted in Astrology and tagged blackouts. Bookmark the permalink.

4 Responses to Blackouts across the USA