The curious case of “not-reception”

Astrologers love to talk about how one planet receives another in one of its dignities, including the wonderful situation of mutual reception in which each planet occupies a major dignity of the other, for example, Venus in Cancer (ruled by the Moon) and the Moon in Taurus (ruled by Venus).

Curiously, the 9th century astrologer Sahl ibn Bishr al-Israili, often known as Zahel or Zael, utilized what he called “not-receptions” in his work. Lilly studied Sahl and incorporated many of his horary principles into Christian Astrology (1647).

What did Sahl mean by a not-reception? In his translation of Sahl’s text (Introduct. §5.9), Ben Dykes cites the following example.  Suppose the Moon lies in Aries, which is the sign of “fall” or “descension” of Saturn, and furthermore that the Moon is applying to an aspect with Saturn but Saturn is not receiving the Moon in any of Saturn’s dignities.

According to Dykes’ translation, “in such a case, the Moon [in Aries, the fall of Saturn] would be like someone approaching Saturn from the house of his enemies, and he [Saturn] will neither receive nor esteem her.”  In other words, the Moon may be very fond of Saturn, but Saturn will view Luna through the tainted lens of the place of his fall where the Moon now resides and will neither receive nor esteem her.

Sahl’s idea seems to be that because the Moon occupies the sign of Saturn’s fall, an inimical place where the ringed planet is held is very low esteem, then the Moon can only beam scornful, degrading rays toward Saturn from such a toxic location — kind of like guilt by association. If Saturn were Superman, the the Moon in Aries would be like someone on a planet laden with Kryptonite who can only send items contaminated with the toxic substance back to the superhero. Saturn will avoid any approach made by the Moon.

Here is a hypothetical horary chart.  Suppose a querent asked about the possibility of a relationship with someone she just met. 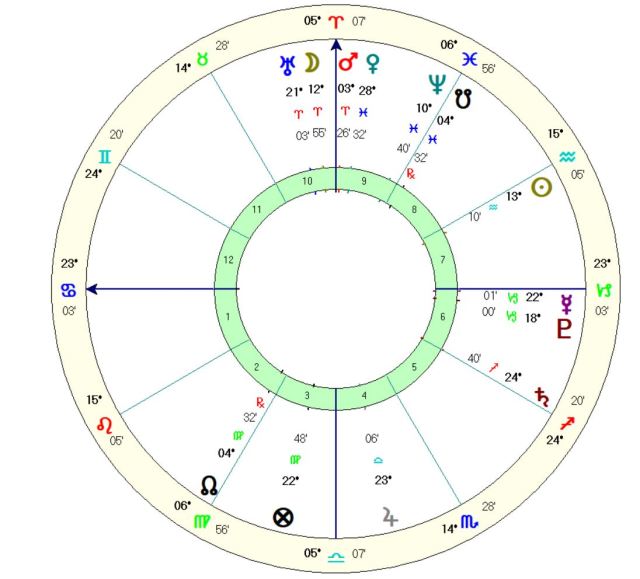 With Cancer rising, the Moon signifies the querent.  The Moon occupies Aries, the fall of Saturn which rules the 7th house of her potential partner.  The Moon nicely applies within orb to trine Saturn in Sagittarius from her location in Aries. What could possibly go wrong?

Sahl suggests that because the Moon (the querent) approaches Saturn (the potential boyfriend) from Saturn’s sign of fall, that Saturn (the guy) will avoid receiving her. He takes one look at what she has to offer and says to himself “she’s not for me” because she’s hanging out in a place where my enemies scorn and disrespect me. Why is she associating with people who despise me?

I will not discuss other factors in this chart (angular Mars, Moon applies to conjoins Uranus and oppose Jupiter) that suggest a non-relationship, because the purpose of this article is to focus on Sahl’s concept of “not-reception.”

Sahl’s idea of “not-reception” is fairly new to me and I have not have much opportunity to test how well it works in practice with horary charts.  If you have experience with this factor in horaries, please leave a comment below about how it has worked out.

Author of books about astrology and tarot, including TAROT PLAIN AND SIMPLE, HORARY ASTROLOGY, and THE ART OF FORECASTING WITH SOLAR RETURNS.
View all posts by Anthony Louis →
This entry was posted in Astrology, horary and tagged Ben Dykes, fall, horary, mutual reception, not-reception, relationship chart, Sahl, Zael. Bookmark the permalink.

1 Response to The curious case of “not-reception”