This week’s news from Hollywood centered around the firing, on Sunday 8 October 2017, of movie mogul Harvey Weinstein for sexual harassment by the company which he founded.  According to the NY Times:

“The sexual harassment allegations uncovered by The Times stretched back decades and came from actresses as well as former employees of the Weinstein Company and Miramax, the previous company that Mr. Weinstein and his brother founded.”

Weinstein was born in Flushing, Queens, NYC on 19 March 1952, time unknown. Here is his natal chart cast for Noon with average planetary positions for the day. It is noteworthy for demonstrating the power of the Hellenistic concept of “aversion” in the interpretation of a chart. 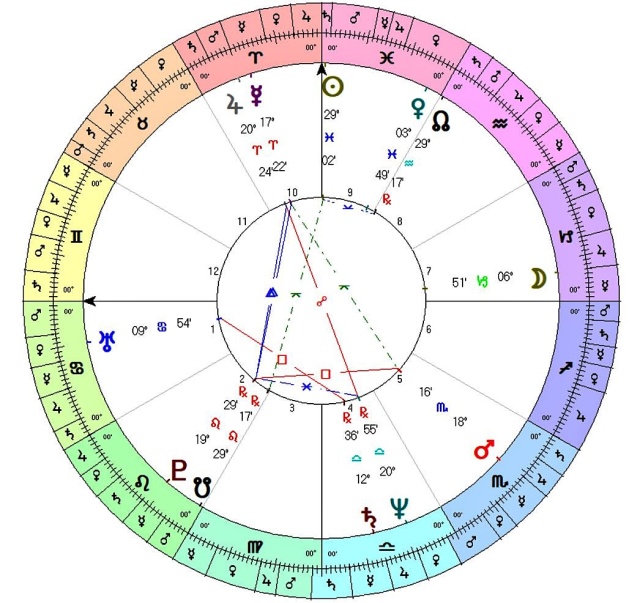 Features of this chart which stand out are:

In Hellenistic astrology the modern quincunx (inconjunct) relationship is referred to as “aversion” and occurs when planets occupy signs that are 30 degrees or 150 degrees apart, and thus unable to “see” each other. Interpretive key words and phrases for the configuration of planets in “aversion” include:

When the planet is in aversion to a sign that it rules, then the ruling planet is unable to manage the affairs symbolized by that sign or any planets residing therein. Paulus of Alexandria tells us that a planet in aversion to its own domicile indicates controversy, separation and exile because that planet cannot “see” its home sign and is thus unable to manage the affairs signified by its sign in a way that benefits the native.

In Weinstein’s chart, the Sun is averse to Leo and thus unable to manage the affairs of Leo as well as Pluto and the South Lunar Node therein. In other words, whatever Leo, Pluto and the Lunar Nodes signify in his chart remains unintegrated with the part of his personality represented by the Sun.

In addition, Venus in Pisces, being inconjunct to Libra, has little say over how Saturn and Neptune behave in her home sign Libra, which is associated with intimate relationships. Being averse, Venus is unable to regulate what goes on in her own Libra home, leaving Saturn and Neptune free to do whatever they feel like. When the cat’s away, the mice will play.

Weinstein’s career has certainly been eclipsed this fall, so let’s look back to the most recent solar eclipse of 21 August 2017 to see how it played out in his chart.  Here is Weinstein’s natal Noon chart with the August solar eclipse superimposed.

“Self-centered tendencies surface during the period these aspects are effective. They reveal egotistical attitudes associated with the natal south node which have created handicaps in the past and presently conflict with positive experiential potentials described by the natal north node. The self-awareness fostered by these aspects contributes to the capacity to develop selfless attributes that promote personal growth and reinforce constructive solar eclipse activity. Events that manifest under this configuration stem from selfish action which the individual perpetrates or action of which he or she is the victim.”

According to Lineman, when a transiting solar eclipse hits the natal South Lunar Node, we can expect activation of the following:

Obtaining sexual satisfaction at the expense of women in one’s employ certainly qualifies. There are many other interesting connections between the August solar eclipse chart and his natal chart, but I will leave those for the reader to explore.

Original material in this post is copyright Anthony Louis 2017.

Author of books about astrology and tarot, including TAROT PLAIN AND SIMPLE, HORARY ASTROLOGY, and THE ART OF FORECASTING WITH SOLAR RETURNS.
View all posts by Anthony Louis →
This entry was posted in Astrology and tagged aversion, harassment, Harvey Weinstein, lunar nodes, quincunx, solar eclipse. Bookmark the permalink.