Bonatti: Will I get my dead uncle’s goods?

Guido Bonatti (? 1207 – ? 1296 CE) published his famous compendium of astrology around the year 1277 CE.  In Treatise 6 On Questions he gives the example of a horary chart for a question posed to him by one of his clients, Will I get my uncle’s goods?  The uncle had apparently died childless, so the querent had an apparent claim to the inheritance as his nephew and next of kin.

Ben Dykes translation (p. 358) gives the following data for the question:  Ascendant at 16 Scorpio, Mars at 20 Scorpio, Venus at 12 Libra, and Mercury at 17 Pisces.  Unfortunately, there is no date between 1100 and 1400 in which the planets occupied these positions simultaneously, so either Bonatti made an error in calculating (or mis-remembered) the chart or there are typos in the Latin manuscript (which is not uncommon in manuscripts copied by hand).

The only chart in the three centuries which I investigated (1100 – 1400 CE) that closely resembles Bonatti’s description occurred on March 15, 1211 at around 9 PM in Florence, Italy.  (I chose Florence because Bonatti lived in this area of Italy; I do not know where the actual chart was cast.)  We do not know Bonatti’s year of birth, but he probably would have been a young boy or at most a precocious teenager in 1211.  It is not possible to get a chart with Mercury in this position relative to Mars and Venus during these three centuries, but on March 15, 1211 the Moon was roughly in the position attributed to Mercury in Bonatti’s text. Moon and Mercury both begin with ‘M’, so a copyist could easily have confused them and introduced an error into the text.

Here is the only chart I could produce in the three-century span that more or less fits Bonatti’s description: 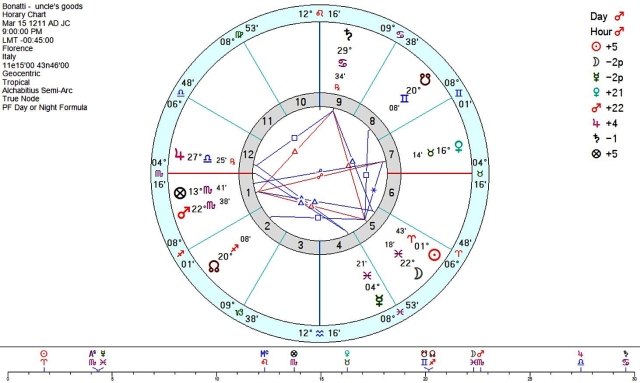 The querent (Scorpio Ascendant) is signified by Mars in Scorpio.  The querent’s uncle is the father’s brother (3rd from 4th) which is the 6th house.  The dead uncle’s goods are the 2nd of the 6th, which is the 7th house ruled by Venus in Taurus.  Venus applies to oppose Mars, which brings the querent and quesited together via an aspect of opposition.  Furthermore, Mars lies in the detriment of Venus, and Venus lies in the detriment of Mars.  Venus receives Mars only by Face, the weakest dignity of all.  Mars does not receive Venus in any of his dignities.  There is little to suggest that the querent will get the uncle’s goods.

But wait!  The Moon in Pisces has recently separated from a sextile to Venus in Taurus, and Pisces is the exaltation of Venus, that is, Venus received the Moon in her exaltation.  The Moon next applies to trine Mars, and the Moon at 22 Pisces lies in the triplicity, term and face of Mars, which is the equivalent of Mars receiving the Moon in a major dignity.  Thus, the Moon transfers the light of Venus to the planet Mars, indicating that the querent will indeed receive his uncle’s goods (which would otherwise have been denied by the opposition of Venus to Mars without reception).  Or as Bonatti puts it, Venus “committed her disposition” to the Moon, who took the Venusian disposition and committed it to Mars.

Bonatti adds that the planet which transfers the light (the Moon in this chart from 1211 CE), being in the 5th house of legates, ambassadors and envoys, indicates that someone would intervene to bring the matter about.  Because Bonatti erroneously believed that Mercury transferred the light (which was impossible because such a chart did not exist in his lifetime), he got hung up on Mercury ruling the 8th cusp (allies of the 7th house partner).  If in fact the Moon transferred the light, then the intermediary would be a 9th house person, like a lawyer or member of the clergy.

Addendum:  I was also unable to reproduce Bonatti’s example of collection of light (Dykes, p.360) at any time between the year 1000 and 1500.  Bonatti apparently published his text around 1277, and the Latin edition which Dykes translated is from about 1491.  Bonatti gives these positions for collection of light: Sun at 14 Gemini, Jupiter at 15 Sagittarius, and Saturn at 18 Aries.  There is no date in this 500-year span in which these positions coincide in the tropical zodiac.  In addition, when Saturn is in Aries and the Sun in Gemini, Jupiter has Retrograde motion and is moving away from Saturn rather than toward it.

Thus, either Bonatti was sloppy in his calculations of charts, his copyists were fairly incompetent, or he simply made up examples that never took place in the real world (the medieval equivalent of today’s “fake news”).  The last possibility is disturbing because it raises the question of whether we can trust Bonatti’s findings if, to illustrate astrological principles, he was simply inventing imaginary examples that never took place in reality.  He says that these were actual questions asked of him by his clients.  Could Bonatti have been a clever con artist?  Perhaps this is one of the reasons that Dante placed Bonatti in Hell with his head put on backwards.

Author of books about astrology and tarot, including TAROT PLAIN AND SIMPLE, HORARY ASTROLOGY, and THE ART OF FORECASTING WITH SOLAR RETURNS.
View all posts by Anthony Louis →
This entry was posted in Astrology, horary and tagged Bonatti, transfer of light, translation of light. Bookmark the permalink.

1 Response to Bonatti: Will I get my dead uncle’s goods?