Astrology and the Tell Tale Yearbook

The Republican Alabama Senate nominee Roy Moore has been much in the news lately. Several women have accused him of inappropriate sexual advances when they were teenage girls and he was a single man in his 30s. The most recent accusation came from a woman who said that Moore had sexually assaulted her when she was 16 years old.  She was working at the Olde Hickory House Restaurant which he liked to frequent. Moore responded by saying: “I can tell you without hesitation this is absolutely false. I never did what she said I did. I don’t even know the woman. I don’t know anything about her.”

Unfortunately for Moore, the woman accuser has his signature and a loving message, allegedly in Moore’s distinctive handwriting, in her 1977 high school yearbook: “To a sweeter more beautiful girl I could not say ‘Merry Christmas.’ Christmas 1977. Love, Roy Moore, D.A. … Olde Hickory House.” This message made the rounds on Twitter around midday on 13 Nov 2017. 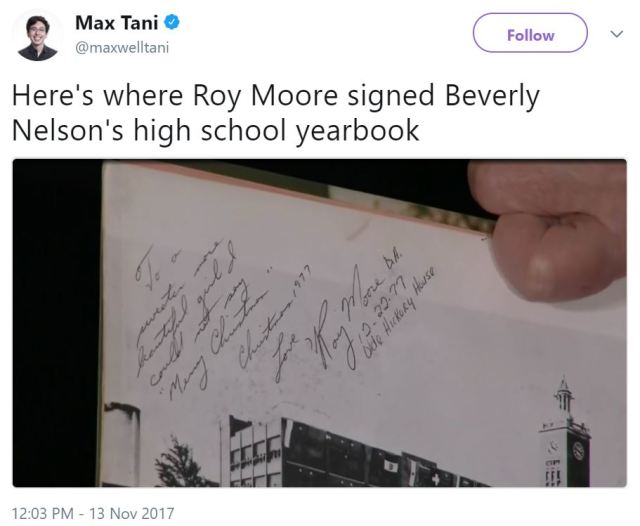 As you can see, the Yearbook message was dated 22 Dec 1977, and I thought it would be interesting to compare the chart for the message with the chart for its recent notoriety. Since the message is not dated, I used a Noon chart on Dec 22, 1977 in Gadsden, Alabama (inner wheel below). Outside are the transits for the time of the Twitter message posted above. 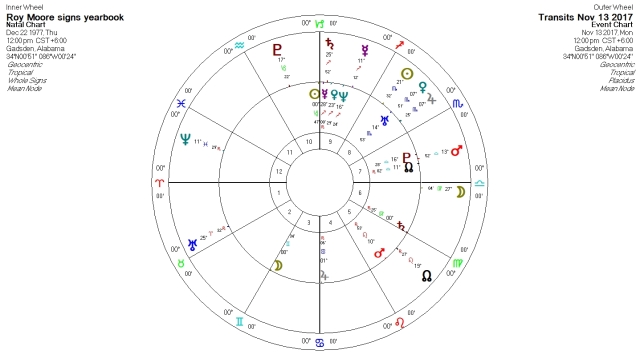 What struck me about the transits is that transiting Moon is square transiting Saturn, which is in a close trine with transiting Uranus. A possible delineation would be an unexpected opportunity to confront reality.

The comparison of the Solar Arc (SA) directions with the “natal” Yearbook chart is also interesting: 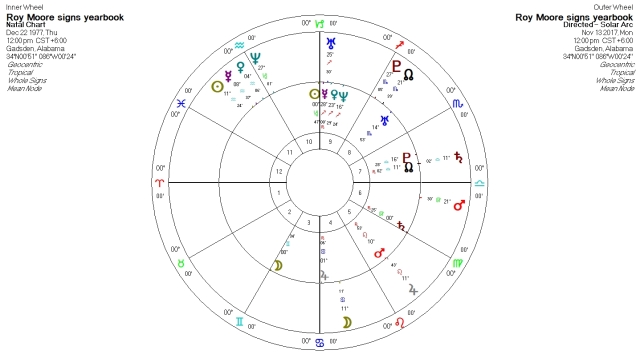 There is a strong emphasis on planets at 11 degrees of their signs:

Also noteworthy in the Solar Arc chart is that SA Uranus (sudden disruptive events) is almost exactly at the midpoint (25 Sag 44) of Mercury/Venus of the Yearbook chart: expect the unexpected with regard to love unions and thoughts of love.

Author of books about astrology and tarot, including TAROT PLAIN AND SIMPLE, HORARY ASTROLOGY, and THE ART OF FORECASTING WITH SOLAR RETURNS.
View all posts by Anthony Louis →
This entry was posted in Astrology and tagged Beverly Nelson, Ebertin, Mercury/Venus, midpoints, Roy Moore, sexual assault, Solar Arc. Bookmark the permalink.