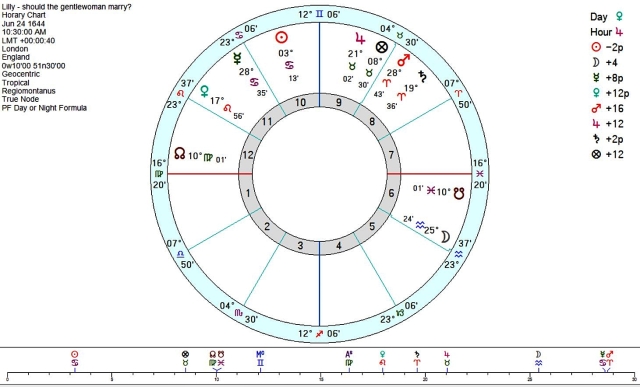 Recently I posted a discussion of “Should I?” questions in horary astrology. One astrologer commented that she was puzzled by my statement that one of Lilly’s charts (“if she should marry the elderly man”) with Mercury ruling the Ascendant and Jupiter ruling the hour met the traditional criteria for radicality, namely, that when these two planets are “of one triplicity, or be one, or of the name nature” (CA 121).

Her objection was that Lilly would not regard Jupiter and Mercury as being of the same triplicity.  In Lilly’s over-simplification of the traditional system of triplicities, the rulers are:

Every since I first read Christian Astrology decades ago, I was suspicious of this simplification, especially because it has Mars ruling Water by day and by night. This did not make intuitive sense. In Lilly’s sheme, Jupiter and Mercury have no relationship by triplicity but in practice they do because both planets rule the Air triplicity, so Lilly must be mistaken in his thinking. The chart with Lord 1 as Mercury and hour lord as Jupiter is one that Lilly regarded as radical enough to be published under his name as an example of his horary art.

Although I initially tried to follow Lilly, eventually I became convinced that the classical Dorothean/Egyptian triplicity rulers were of more value in practice. In the Dorothean system, the triplicity has three planetary rulers: day, night, and participating (a planet that assists the main ruler both by day and by night). The assignment of triplicity rulers has much to do with the sect of the chart, a key concept in Hellenistic astrology.

This more ancient system of triplicity rulers is quite elegant and makes more sense. In this system, a horary chart with Mercury ruling the Ascendant and Jupiter lord of the hour is radical because Jupiter and Mercury (along with Saturn) are rulers of the Air triplicity.

Unfortunately, when Lilly adopted the old rule that in radical charts the hour ruler and Ascendant-ruler must be “of one triplicity, or be one, or of the name nature” (CA 121), he changed the definition of what constitutes a triplicity ruler in traditional horary texts; the use of all three triplicity rulers was an essential part of this principle. Essentially Lilly mixed apples with oranges and introduced a half-baked notion into his version of horary astrology. Lilly’s redefinition of triplicity rulership, probably based on his reading of Ptolemy, caused many charts to be considered “not fit to be judged” which traditionally would have been considered radical at the hour of the question.

In many ways it seems odd that Lilly did not adopt the Dorothean system of triplcities, which appears in so much of the horary literature which he referenced in his magnum opus Christian Astrology. For example, Lilly was a great admirer of Bonatti who used the system of three triplcity rulers, as evidenced in this quote from Bonatti’s Treatise 6 (Dykes translation, p. 552): “… I looked at the Lord of the triplicity of Libra, namely Saturn (who is the first), Mercury (who is the second), and Jupiter (who is the third).” Clearly, Lilly’s hero Bonatti would have regarded the hour ruler (Jupiter) and Ascendant ruler (Mercury) as belonging to the same triplicity in Lilly’s chart about “Should the gentlewoman marry the elderly man?”.

Deborah Houlding has an interesting discussion of hour agreement and radicality at this site: http://skyscript.co.uk/hour_agreement.pdf.

The table of dignities below is the one I prefer in horary astrology:

Author of books about astrology and tarot, including TAROT PLAIN AND SIMPLE, HORARY ASTROLOGY, and THE ART OF FORECASTING WITH SOLAR RETURNS.
View all posts by Anthony Louis →
This entry was posted in Astrology, horary and tagged Deborah Houlding, horary astrology, hour agreement, radical chart, triplicity rulers. Bookmark the permalink.