In a recent post I raised the question about the theoretical reasons for Lilly’s use of the 5-degree rule in horary. What prompted my question was my being told by a colleague that horary astrologers in France and Spain had abandoned that rule on the basis of  the belief that it was not justified by the basic principles upon which Western astrology is founded. My first impression was that the 5-degree rule made sense for the cusps of the angular quadrant houses because the Angles are powerful points in the chart. I couldn’t think of a good reason for extending the rule to the cusps of the succedent and and cadent houses.

Please note that in this post I am simply exploring ideas and not coming to definitive conclusions. This is a matter that puzzles me, and I am seeking to gain a better understanding of what the early founders of modern horary were thinking and how they did they work.

I posted the question in an online horary group to which I belong and it led to a fascinating and enlightening discussion about the original house systems and how they were used. The origin of the 5-degree rule may have been Ptolemy’s discussion of how to calculate the length of life of the native. To do so Ptolemy postulated an Equal House system in which the boundary of the first house is 5 degrees before (above) the Ascendant degree, and the other houses are each 30-degree segments that follow the 1st house in order around the wheel.

It is not clear whether Ptolemy intended this system only to calculate the length of life, or whether he used it for other types of delineations of a natal chart. Sahl apparently rendered Ptolemy’s idea as follows in his Judgment 44 (Dykes translation): “…a planet does not fall from the angles except after 5 degrees. For example, if the angle were in the 10th degree of Aries, every planet which is less than 5 degrees [of Aries] is cadent and not thought to be in the angle.”

Wade Caves showed that Masha’allah used the 5-degree rule for the MC and not just for the Ascendant degree by citing a chart from The Astrological History of Masha’allah by Kennedy and Pingree (1971, Harvard University Press) in which the position of Mercury is described as follows: “Mercury is in its descent in the ninth, [but] by equalization in the tenth.”

By “in its descent” I assume Masha’allah means either that the planet is cadent from the 10th sign from the Ascendant or that it is falling away from the degree of the MC, which could place it in the 9th or 8th house.  By “equalization” I assume he means that by the use of the 5-degree rule Mercury which is within a couple degrees of the MC degree but falling away from the MC would be considered a 10th house planet. Here is the chart which may look strange because the 1st house is at the very top. 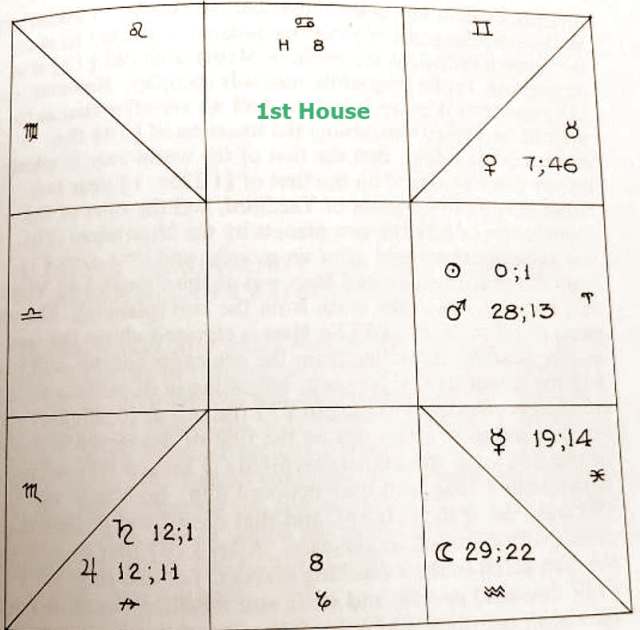 Presumably this chart is set for Baghdad, which would give is a MC degree of 21 Pisces, which is the 9th sign from the Ascendant. In this example, Masha’allah appears to regard the 10th house to be defined by the MC degree rather than by Whole Sign houses, and Mercury lies in the 10th quadrant house because it is within 5 degrees of the MC degree. This seems to be clear evidence that Masha’all did use the 5-degree rule for houses other than the Ascendant.

There are inconsistencies in Masha’allah’s example. In the previous post I reviewed one of Masha’allah’s horary charts from On Reception in which Venus lies at 2 Sag 30 (the 3rd degree of Sagittarius) with the 9th degree of Sagittarius rising. Thus, Venus is more than 5 degrees from the Ascendant and should be considered to be falling away or cadent from the Ascendant, but Masha’allah never mentions this. Nor does he say that Venus is a 12th house planet, though he states that Jupiter in Scorpio is in the 12th house. In this example, Masha’allah appears to be using Whole Sign houses rather than quadrant ones.

In Dykes translation of Masha’allah On Reception (page 480), Masha’allah says explicitly of the Angles: “… the second [quickest and most effective] is the angle of the Midheaven or tenth sign,” which Dykes regards as an unambiguous equating of the 10th sign with the angular Midheaven house. In this quote Masha’allah appears to be referring to Whole Sign houses rather than a quadrant system.

From my reading of Masha’allah, one of the founders of modern horary, it appears that he did use the 5-degree rule, at least for the angles, and that he used by Whole Sign and quadrant houses (probably Alcabitius).  In the charts of his that I’ve looked at in detail the Whole Sign positions are the same as the Alcabitius positions, so I haven’t yet been able to find a good example in which he uses the topical meanings of the Whole Sign sign in preference to those of the quadrant house.  Such an example would help clarify how he used each of the two systems of houses in his work.  I’m also looking for examples in which Masha’allah may have used the 5-degree rule for succedent and cadent houses but haven’t found any yet, which does not mean they are not out there.

Here is another interesting example from Masha’allah (Kennedy & Pingree, 1971). 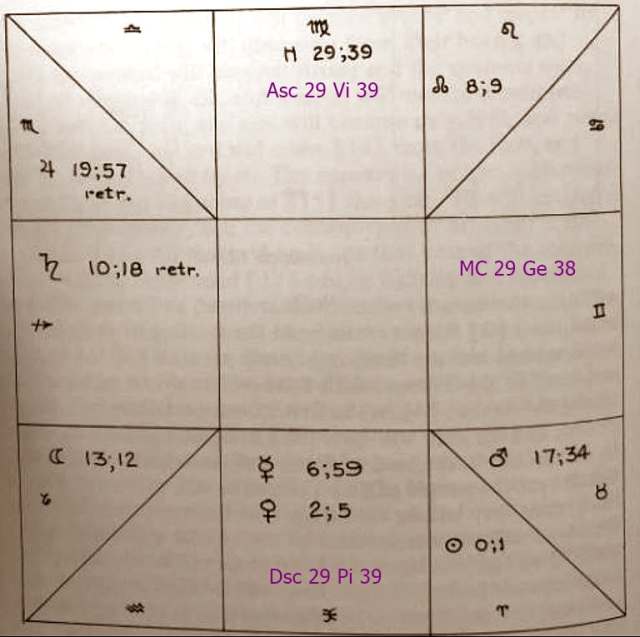 The Angles are shown for Baghdad when the Sun is in the first degree of Aries (the vernal equinox).  Masha’allah says that “…the cardines of the ascendant are perpendicular, and the planets are cadent, except the Sun. It is in the seventh, between it [Sun] and the center of the seventh there being two degrees, conferring counsel upon Saturn.”  Let’s pick apart Masha’allah’s comments:

This chart is enlightening because it shows the difficulty we have when translating ancient texts. It is important not to import our 20th century understanding of words and concepts into the original text because the words used by the translators of Masha’allah into Latin and then into English may not mean what we assume they mean with out 20th century eyes.

In the charts reviewed so far it does appear that Masha’allah did use the 5-degree rule for the Angular points and that he took into account both the Whole Sign and the quadrant houses but how he integrated the two house systems is not yet clear.

Author of books about astrology and tarot, including TAROT PLAIN AND SIMPLE, HORARY ASTROLOGY, and THE ART OF FORECASTING WITH SOLAR RETURNS.
View all posts by Anthony Louis →
This entry was posted in Astrology, horary and tagged 5-degree rule, alcabitius houses, Masha’allah, Whole sign houses. Bookmark the permalink.