Earlier this week a headline caught my eye: Student Missing in Lake Forest (California). According to the news article:

“Blaze Bernstein entered Borrego Park in the Foothill Ranch-Lake Forest area of Orange County Jan. 2 at 11 p.m. The college student, home for the holidays, was wearing a dark jacket, dark gray long-sleeved zip-up and white Adidas shoes. His family said he hasn’t been seen since, and now a massive search is underway to find the missing Ivy league student. … At 9:30 p.m., he sent a text message with his family’s Lake Forest address for a high school buddy to pick him up and take him to the park to meet the third person…”

Lilly says that when a person goes missing, you use the Ascendant to represent the missing person and study the chart for the moment he was last seen to judge what happened.  Here is the chart for 11 pm, 2 Jan 2018, Lake Forest, CA. 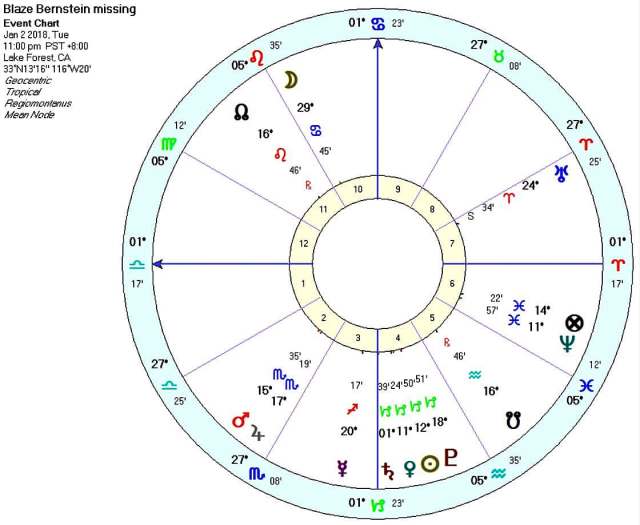 The Libra Ascendant signifies the missing person. His ruler Venus lies in the 4th house (fields, landed areas) in Capricorn (an earth sign), suggesting that he may still be in the park he went to visit.  According to Lilly, the 4th house signifies “gardens, fields, pastures, orchards” and Capricorn suggests “fallow-grounds, barren fields, bushy and thorny.”

Venus applies to conjoin the Sun (which is the exalted ruler of the 7th house of death), and Venus is now “combust” the Sun, which Lilly interprets as:

Will he be found dead or alive?  The Aries 7th house rules death.  The Moon, a co-ruler of the missing person, is in square to Uranus in Aries on the cusp of the 7th house, suggesting the possibility of a sudden or unexpected demise.

Following the advice of Barbara Watters, in missing person charts I always look at Emerson’s Point of Death:   Mars + Saturn – MC.  In this chart Emerson’s Death Point calculates to 15 Taurus 51, which is  almost exactly opposite Mars (at 15 Scorpio 35), ruler of the cusp of the 8th.  Unfortunately, such an exact aspect between the Point of Death and the ruler of the 8th almost always indicates that the missing person will not be found alive.

As the chart had indicated, tragically the missing student’s body was discovered during a search Tuesday afternoon in brush near Lake Forest’s Borrego Park, the Orange County Sheriff’s Department confirmed.

This sad case again confirms what Lilly taught in his 1647 text on horary astrology.

“Blaze Bernstein, 19, went missing after a meetup up with former classmate Samuel Woodward, 20, who he had been communicating with on Snapchat while home on winter break. Bernstein’s body was found on January 9 in a shallow grave near a neighborhood park in the Orange County park by his parents’ home. He had been stabbed more than 20 times.

Police arrested Woodward based on DNA evidence linking him to the crime. Woodward had told police that Bernstein, who was gay, tried to kiss him — clenching his fists and jaw as he recounted the story — for which he pushed Bernstein away. He also reportedly called Bernstein a homophobic slur.

Now, Woodward’s online presence has revealed his white supremacist and neo-Nazi beliefs. ‘Anti-Semitism and homophobia were certainly aspects of his ideology,’ said one user on a site Woodward frequented, who claimed to be close to the suspect.”

Author of books about astrology and tarot, including TAROT PLAIN AND SIMPLE, HORARY ASTROLOGY, and THE ART OF FORECASTING WITH SOLAR RETURNS.
View all posts by Anthony Louis →
This entry was posted in Astrology, horary and tagged Blaze Bernstein, Emerson's Point of Death, missing person. Bookmark the permalink.