Lilly and the Beheading of King Charles I

A January 30th post on Facebook read “Happy Regicide Day,” making reference to the beheading of King Charles I of England, Scotland and Ireland for treason on January 30 (OS), 1649. Since then 10 days have been added to the calendar, so by today’s convention the Regicide Day would be February 9th.

Wade Caves noted that William Lilly had asked a horary question about whether the king would be beheaded, which he answered in the affirmative.  Here is Lilly’s horary chart, which was cast 11 days prior to the king’s execution. 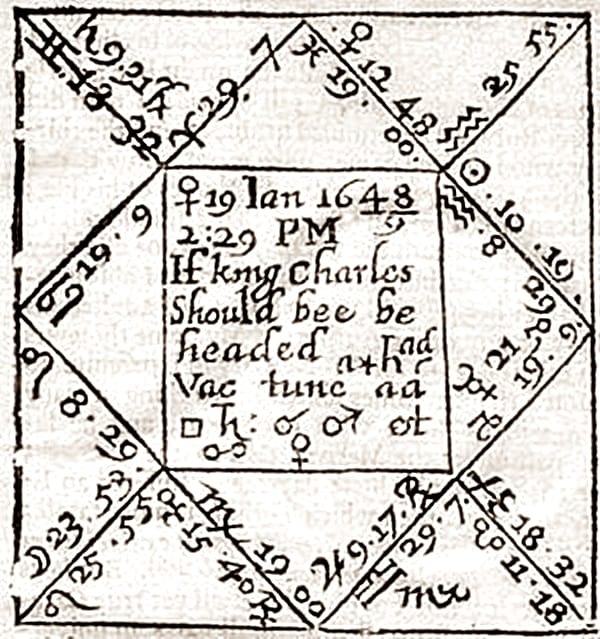 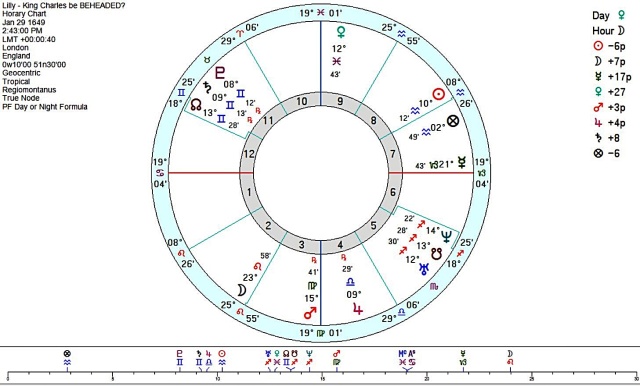 It is a Venus day during a Moon hour. Venus rules the radical 5th, which is the 8th of death of the 10th house king. The Moon rules the Ascendant of the horary chart.

Lilly takes the Pisces 10th house to represent King Charles I, whose significator is Jupiter. The king’s adversaries are shown by the opposite Virgo 4th house, ruled by Mercury. The judges in the king’s trial are shown by the Capricorn 7th house (10th from the 10th of the king) and are signified by Saturn.

Jupiter (King Charles) is Rx and peregrine in the 4th house of the king’s enemies, so he is powerless and at the mercy of his opponents.

Lilly notes that the moon is conjunct Regulus (at 24 Leo 57), a royal fixed star which can indicate prominence but also downfall.  Robson says of Regulus: “According to Ptolemy it is of the nature of Mars and Jupiter, but most later authors liken it to Mars only, while Alvidas states that it is similar to the Sun in good aspect to Uranus. It gives violence, destructiveness, military honor of short duration, with ultimate failure, imprisonment, violent death, success, high and lofty ideals and strength of spirit, and makes its natives magnanimous, grandly liberal, generous, ambitious, fond of power, desirous of command, high-spirited and independent.” [Robson, p.195.]

The Moon is also within orb or the king’s natal Ascendant (at 26 Leo 30 in Lilly’s birth chart for the king).  In his notes on the horary figure, Lilly writes that the Moon is void of course, after which it will eventually square Saturn and then oppose Venus and conjoin Mars. Being the ruler of the house opposite that of the judges, the Moon can signify their verdict in the trial.

These aspects of the Moon are not good news for the king because the Moon is close to his natal Ascendant and will square Saturn (the judges in his trial and ruler of the radical 8th of death), then oppose Venus (ruler of the turned 8th of death of the 10th house king) and conjoin Mars (ruler of cutting tools and executioners).  In addition, Mars rules Scorpio, which is intercepted in the radical 5th which is the 8th of death of the 10th house king.

Thus, Lilly judges of the king: “I certainly concluded, he would die and be put to death.”

Here is Lilly’s chart for the nativity of Charles I: 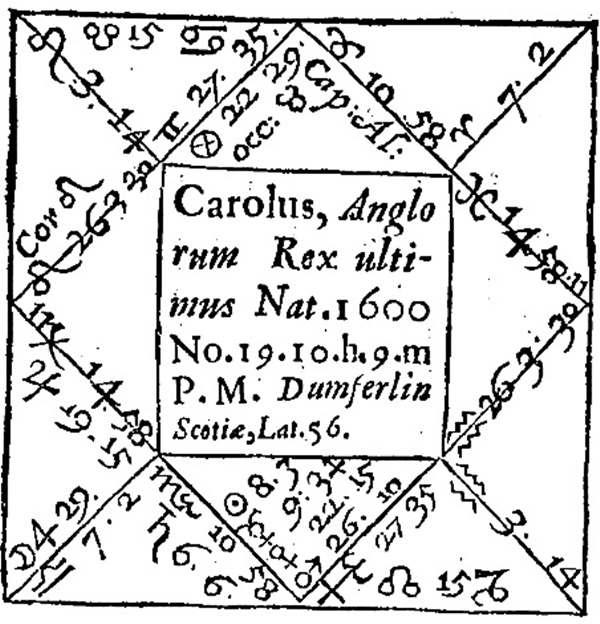 The Lot of Nemesis

In Hellenistic astrology the Lot of Nemesis is associated with the greater malefic Saturn and is an indication of a hard fall, imprisonment, disgrace, exile, destruction, grief, and so on.  Valens says of this Lot: “Nemesis becomes a contributing cause of subterranean fates and of everything which is ice-cold, of demonstration, impotence, exile, destruction, grief, and quality of death.” (quoted from http://www.astrology-x-files.com/x-files/arabic-parts.html)

In Lilly’s horary chart, the Lot of Nemeis falls at 12 Libra 40, in exact conjunction with Venus (at 12 Libra 42). Here Venus rules the turned 8th of death of the 10th house king.

In Lilly’s horary, Emerson’s Point of Death calculates to 5 Sag 47.  The closest aspects are the oppositions from Saturn and Pluto. Emerson’s Lot of Death does fall in the radical 5th, which is the turned 8th of death of the king, but there are no very close aspects.

Finally, here is the natal chart of Charles I (data from Peter Stockinger) with Lilly’s horary about his beheading superimposed: 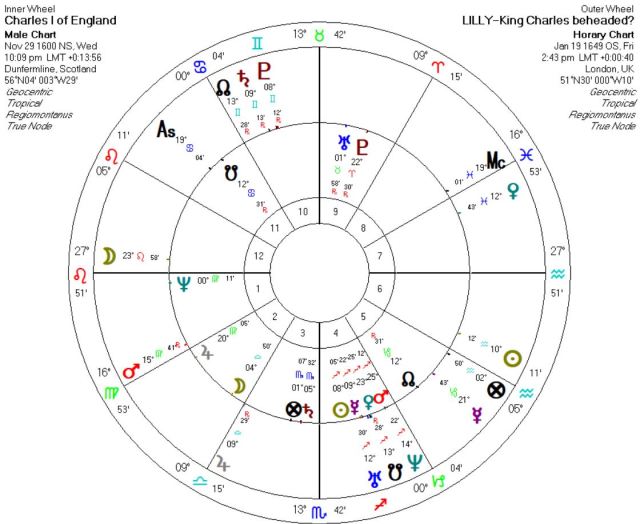 Comparing the horary chart to the beheading chart:

According to wikipedia: “At about 2:00 p.m., Charles put his head on the block after saying a prayer and signalled the executioner when he was ready by stretching out his hands; he was then beheaded with one clean stroke.”  We get the following beheading chart (Jan 30 OS, 1849), which is superimposed on Lilly’s horary question chart (Jan 19 OS, 1849), “If King Charles should be beheaded?”  [Charles was executed at Banqueting House at Whitehall, so I used the coordinates of Whitehall (51N30, 00E07). 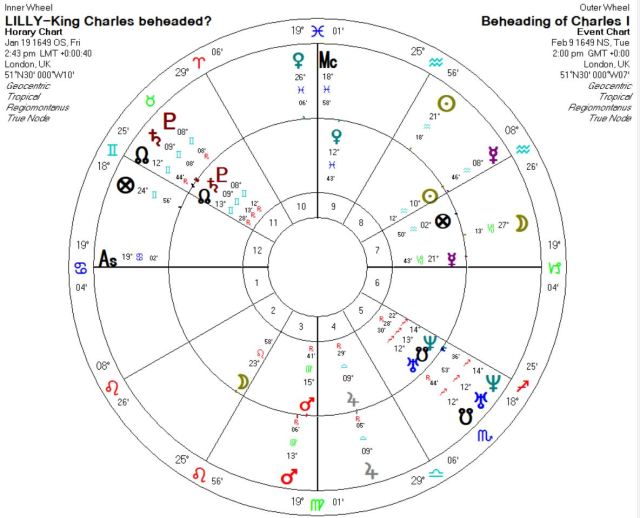 Notice how the angles for the chart of the execution on January 30th match those of Lilly’s horary question asked eleven days earlier.  In addition, Uranus, which is receiving a square from Mars, is now in the degree of the South Lunar Node in the radical 5th, which is the turned 8th of death of the king.  Mars square and 8th hosue Uranus is an apt symbol for a sudden violent death.

Finally, the fixed star Algol, often associated with beheading, lies at 21 Taurus 17 in January of 1649.  At the time of the king’s execution the transiting Sun was exactly square Algol from the radical 8th house of death of Lilly’s horary chart. Robson writes that Algol is “of the nature of Saturn and Jupiter. It causes misfortune, violence, decapitation, hanging, electrocution and mob violence, and gives a dogged and violent nature that causes death to the native or others. It is the most evil star in the heavens.” [Robson, p.124.]

Author of books about astrology and tarot, including TAROT PLAIN AND SIMPLE, HORARY ASTROLOGY, and THE ART OF FORECASTING WITH SOLAR RETURNS.
View all posts by Anthony Louis →
This entry was posted in Astrology, horary and tagged beheading, Charles I, Lilly. Bookmark the permalink.

4 Responses to Lilly and the Beheading of King Charles I