In the 5th century BCE, the philosopher Empedocles believed that when the goddess Aphrodite fashioned the human eye from the four basic elements (earth, air, fire and water), she lit a fire in the eye which emitted eye beams that made vision possible. This fanciful quasi-religious hypothesis became known as the emission or extromission theory of vision. The idea is that, thanks to Aphrodite, the human eye emits beams or visual rays from its internal fire. These beams or rays emerge from the eye and travel in straight lines until they hit an object, making visual perception possible. Somehow vision occurs because eye beams from your inner fire touch external objects and render them visible.

Empedocles realized that there was a logical flaw in his argument. If vision is made possible by beams emanating from the human eye, then why do we see better during the day than at night? To solve this dilemma, Empedocles postulated that there must be some interaction between eye beams and sun beams, which made day-vision a lot better.

Around 300 BCE, the mathematician Euclid (remember high school geometry?) realized that Empedocles’ theory was nonsense. Euclid noted that light traveled in a straight line, and he wrote an entire mathematical treatise on optics and the laws of reflection. Euclid pointed out that if you look up at in the sky at night, you can immediately see the extremely distant stars. How is this possible if the eye beams have to travel to the edge of the universe to make the stars visible to you instantaneously?

Another advance in optical theory was made by Hero of Alexandria (c. CE 10-70) during the heyday of Hellenistic astrology in the same city.  Hero of Alexandria noted that the hypothetical eye beams (visual rays) traveled at great speed from the eye’s inner fire to objects in the environment where they were reflected by smooth surfaces but could become trapped in the uneven roughness or porousness of unpolished surfaces. 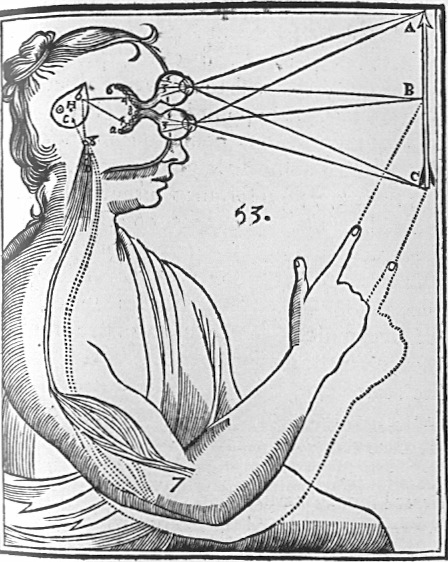 In this diagram, if the figure were a planet, the point B would be its “center of vision” and the range from points A to C would be its orb. Anything outside that orb would be invisible to the planet.

Unfortunately, the influential 2nd-century physician Galen subscribed to the emission theory of vision, which caused future generations of doctors to accept this idea.  Hellenistic astrologers also seemed to have swallowed this theory hook, line and sinker, despite its logical inconsistencies.

In their text on traditional astrology (On the Heavenly Spheres), Avelar and Rebeiro discuss the ancient theory of optics as the basis for astrological aspects. They note (p.106) that in the case of the major aspects, “the planet radiates its light, which touches another planet, allowing them to see each other and form the aspect.”

Just as the human eye has an internal fire (thanks to Aphrodite), each planet has its own internal fire which emanates planetary beams of light. To influence one another, planets must be able to “see” each other. For planet A to be able to influence planet B and vice versa, the planetary rays emitted by A must reach B, and the planetary rays from B must reach A. In some cases planet A can see planet B, but not vice versa; this has to do with the theory of orbs, which are essentially each planet’s visual field.

Another weird feature of planetary vision is that planets are only able to look in certain directions. They see well when they look directly ahead (180 degree aspect) or look 60, 90 or 120 degrees (sextile, square, trine) from their direct line of vision. However, if a planet looks either 30 or 150 degrees away from its direct line of vision, it encounters a blind spot (inconjunct) and can’t see anything.

An interesting corollary of this early optical theory of astrological aspects is the Arabic notion of returning, mentioned by Sahl Ibn Bishr in his Introduction to the Science of the Judgment of the Stars.  Writing about horary astrology, Sahl (James Holden translation) states:

“The explanation of return is when a planet or the Moon is joined to another planet that is retrograde or under the Sun’s beams, and it returns to it whatever it receives from it, and it destroys the matter.”

The idea is that if planet A applies to planet B, but B is Rx or under the sunbeams, then B is unable to accept and thus returns to A whatever B would have received from A. Now, according to aspect theory, A can only influence B if A can see B. Should B happen to be under the sun’s beams it is rendered invisible to A, and so A can’t give anything to B because A can’t see B. In this case whatever A wants to give to B returns automatically to A simply because it can’t be passed on. The fact that planets within 15 degrees of the Sun are invisible to the human eye has to do with the astronomical phenomenon of heliacal rising and setting, which refers to a period of the planet’s invisibility due to its proximity to the sun. Out of sight, out of mind.

We can think of this phenomenon in terms of the childhood game of “tag.” According to Britannica, tag (aka, touch or tig) is “a children’s game in which, in its simplest form, the player who is ‘it’ chases the other players, trying to touch one of them, thereby making that person ‘it’.” No doubt the ancient Arabic astrologers who wrote about “returning” loved to play the game of tag in their schoolyards when they were children.

Planets aspecting each other are playing a celestial game of tag. Planet A applies to planet B, attempting to tag B and pass “it” from A to B.  In the older astrological literature, passing “it” is called committing disposition or pushing maintenance, that is, planet A says to planet B, “you’re ‘it’“.  If for some reason planet B cannot receive the “it” or is able to evade the “it” (by being invisibly combust or backwardly retrograde, for example), then the “it” automatically reverts back to A who remains “it” because A is unable to successfully tag another planet.

The case of planet B being retrograde and evading “it” may not be as clear. It could be that a retrograde planet is debilitated and too weak to be able to accept what A offers, so that A’s “it” remains with or returns to A. Or perhaps because B is traveling backward toward A (an unnatural movement, like a car traveling in the wrong direction on a superhighway, resulting in the destruction of the matter, as Sahl might say), when A’s rays reach B they strike the reflective surface of B with such force that they are reflected back to A rather than being absorbed by B. I’m not sure how the Arab astrologers applied the discredited optical theory of extomission to explain this matter.

In any case, the ancient emission theory of light informs the astrological theory of aspects, regardless of how silly the original theory sounds.

<< All original material in this post is copyright Anthony Louis 2018 >>

Author of books about astrology and tarot, including TAROT PLAIN AND SIMPLE, HORARY ASTROLOGY, and THE ART OF FORECASTING WITH SOLAR RETURNS.
View all posts by Anthony Louis →
This entry was posted in Astrology, horary and tagged astrological aspects, emission theory, eye beams, optics, returning, Sahl, visual rays. Bookmark the permalink.