Back in the 1960s when I was first learning astrology I decided to keep a log of the transit of planets through my natal chart and corresponding occurrences in my life.  One thing that stood out was that an event often took place on the day that a planet made its ingress into a new sign, or sometimes in the following day or two.  In addition, the nature of the event was symbolically connected to the house which had that sign on its cusp, even though zero degrees of the sign was inside the previous Placidus house.  For example, on the day of a planetary ingress into Scorpio I might have to deal with some financial matter; zero Scorpio lies in my 1st Placidus house but my 2nd Placidus house has about 9 Scorpio on the cusp.  In hindsight I think what I was observing was the significance of whole sign houses.

When I was learning horary in the 1980s I carefully read Lilly’s Christian Astrology several times and noticed the following passage regarding the whereabouts of a thief (CA 345): “Behold the Significator of the Thief, if thou find him in the end of the Sign direct, or separating from Combustion, or applying to a Planet in the 3rd or 9th house; say, he is gone or going out of the Town, for the removing of the Significator out of one Sign into another denoteth change of Lodging or removing, if it be a superior Planet, the rule is infallible.”

Earlier this year I had the opportunity to discuss this passage with Wade Caves who said that as far as he knows it is the only time that Lilly rated one of his guidelines as “infallible”.  Wade added that he too had found this principle to be very reliable in horary charts, but he extended the principle from thieves to meaning a significant change regarding the matter inquired about.  Following Wade’s lead, we might re-phrase Lilly’s quote as: the removing of the Significator out of one Sign into another denoteth a significant change related to the matter of the Question; and if it be a superior Planet, the rule is infallible.

Recently I was watching a YouTube video by astrologer Patrick Watson in which he was discussing the change of sign by Retrograde Mars on Sunday evening 12 August 2018 (Eastern Daylight Time, USA) when the red planet moved from Aquarius back into Capricorn.  Patrick suggested that Mars’ change of sign should show up as some type of event linking the adjacent Whole Sign houses, Aquarius and Capricorn, in one’s natal chart.  Curious, I looked at my own chart to make an interpretation.  Here is my natal chart with Placidus houses: 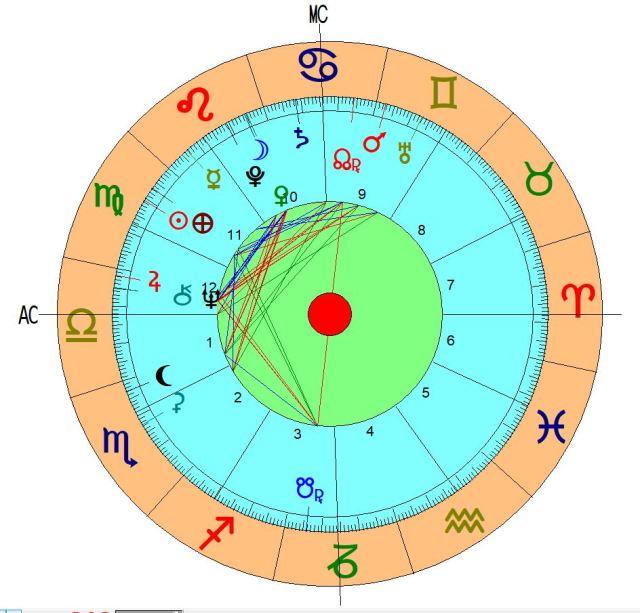 On 12 August 2018, transiting Mars was moving backward from Aquarius to Capricorn.  In my natal chart, Aquarius rules the 5th house (both Placidus and Whole Sign) of children, fun and creative projects.  Capricorn rules the 4th house of home, family, parents and foundations.  Mars rules the 2nd house of money and income and the 7th house of marriage, partnerships and contracts.  Mars made the change from Aquarius to Capriorn about 10 PM EDT on Sunday evening, 12 August 2018.

It does seem as if planets crossing the boundary between signs, whether by retrograde or direct motion, are worth paying attention to in many branches of astrology.

Having written this above post, I noticed that on the evening of 30 August 2018 the transiting Moon would leave Aries and ingress into Taurus in my 7th house (Placidus) to conjoin transiting Uranus in early Taurus, also in the 7th house.  Because it was only the Moon making an ingress, I expected some minor disruption or surprise to occur that evening, related to 7th and/or 8th house matters because Taurus is on the cusp of my 8th house.

At 8:12 pm on 30 August 2018 my wife and I received a phone call from the wife of a good friend.  It turns out that he was having some neurological symptoms and had been admitted to the hospital.  Preliminary testing that afternoon suggested the presence of some type of mass within his skull.  This was certainly an upsetting event, more much serious than I was expecting from the chart, and it involved my wife and my friend’s wife (7th house symbolism) as well as 8th house matters.  Lilly associates the 8th house with themes of death, its quality and nature, loss, fear an anguish of mind, the privy parts, toxins, and so on.  Deborah Houlding notes that “traditional astrology relates the eighth house to crisis, hidden matters, anguish of mind, poison and deadly fears.”  My experience with the 8th is that it often relates to a need for medical or surgical intervention.  Here is the section of my natal chart with the 8th house inside and the transiting planets outside the wheel (the red circle). 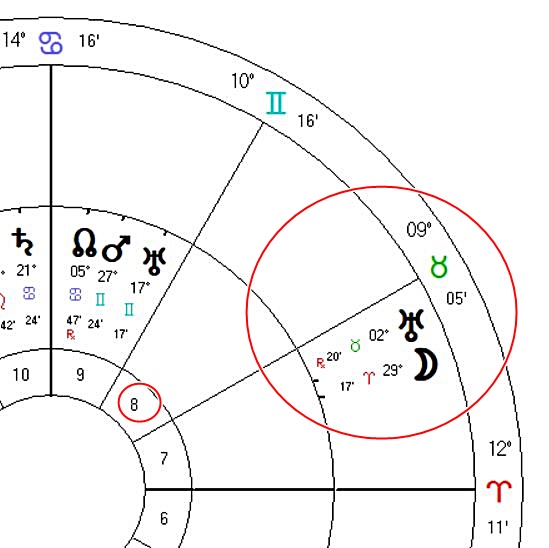 Author of books about astrology and tarot, including TAROT PLAIN AND SIMPLE, HORARY ASTROLOGY, and THE ART OF FORECASTING WITH SOLAR RETURNS.
View all posts by Anthony Louis →
This entry was posted in Astrology, horary and tagged change of sign, ingress, Whole sign houses. Bookmark the permalink.