Posted on September 1, 2018 by Anthony Louis

There has been much debate in recent years about the use of quadrant houses in Hellenistic times. The 8th-century Persian Jewish astrologer Masha’allah ibn Athari (740 – 815) was well versed in the writings of Dorotheus of Sidon, a 1st-century Hellenistic astrologer, and so we can look to his work to see how the Hellenistic tradition was understood and used by Persian astrologers in the 8th century. Fortunately, Masha’allah’s texts have been preserved and translated into English. 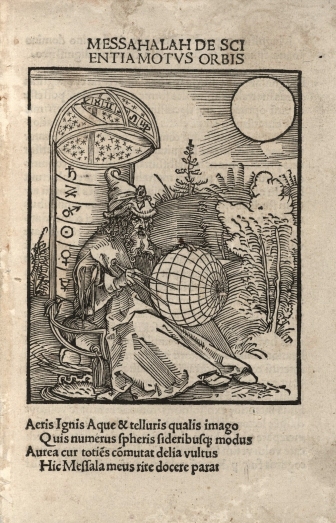 In 1971 Kennedy and Pingree published a scholarly translation of Masha’allah’s work on mundane astrology “On Conjunctions, Religions and People” in which the 8th-century astrologer presented a series of charts of Jupiter/Saturn conjunctions and Aries ingresses, with explanations of how they correlated with major world events.

What becomes clear in reading the text and reconstructing the charts in the book is that Masha’allah used both Whole Sign and Porphyry houses. Not being astrologers, Kennedy and Pingree made a mistake in stating the following: “There are two methods of reckoning the twelve places or δώδεκα τόπος. The simplest way (‘by counting’) merely counts each sign as a place; the other (‘by division’) uses equal arcs of 30 degrees along the ecliptic measured from the ascendant degree …” (The Astrological History of Masha’allah, Harvard University Press, 1971, p. 92). This statement is incorrect. If you study the charts in the text, it is clear that the method of assigning places by division is in realty the method ascribed to Porphyry in which the MC is the cusp of the 10th place and the intermediate cusps are found by dividing the angles between the horizon and meridian into equal thirds.

If we were to use Equal Houses, as Kennedy and Pingree suggest, the the cusp of the 10th would fall at 19 Virgo (10 signs or 30-degree segments from 19 Sagittarius). Then the 10th place would go from 19 Virgo to 19 Libra, locating Jupiter in the 10th and Mars in the 11th. Clearly Kennedy and Pingree got it wrong for this and the other charts in the book. In fact, Masha’allah was using Porphyry houses in which the MC at 4 Libra begins the 10th place and the cusp of the 11th lies at 29 Libra, encompassing both Mars and Jupiter, as Masha’allah tells us in his text. This comparison of Equal and Porphyry house division for the date of February 11th illustrates this point. 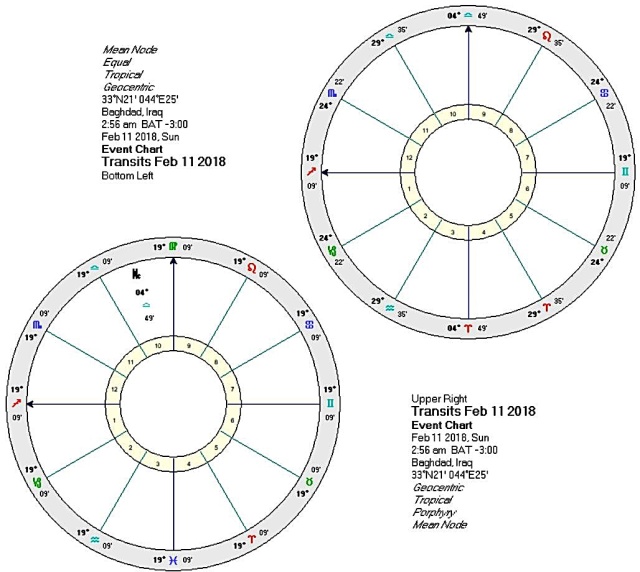 Here is a list of the values Masha’allah used in the original of this chart (p. 41 of the Kennedy & Pingree text) for the “World-Year of the Shift [of the Jupiter/Saturn conjunction], being the conjunction indicating the Deluge [Noah’s ark deluge].  The original chart is allegedly cast for February of 3380 BCE when the great Jupiter/Saturn conjunction shifted from the Air triplicity into the Water triplicity in the water sign of Scorpio, with Saturn Rx in the disastrous 12th house, marking the onset of the epoch of the Great Deluge:

Presumably, Masha’allah was using houses by counting (Whole Sign) to determine the topics which the houses and their planetary rulers and occupants signified, and the houses by division (Porphyry’s method of dividing semi-arcs into thirds) to judge the strength and business (or weakness and inactivity) of the planets. I need to study his discussion of the various charts to be sure. Interestingly, the 17th century French astrologer Morinus also used both Whole Sign and Regiomontanus houses to judge his charts; he regarded the Regiomontanus system as the true or “formal” method of house division and the Whole Sign house system by counting from the Ascendant as providing “accidental” houses — most likely an analogy to essential and accidental dignities.

A take-home lesson from Masha’allah for modern astrologers is that instead of wasting our time debating which is the single best system of houses, we should be learning how to use both Whole Sign and quadrant houses simultaneously, as did the great Persian astrologers of the Middle Ages.

“Among well-trained Jyotishi (Vedic astrologers), it is common practice to use both the whole sign house system for general analysis, and the Sripati house system (identical with Porphyry) for more specific analysis.
In applying the latter, attention also shifts from sign lords to sign and nakshatra lords, thus allowing another level of specificity different from western systems.”

All original material in this blog is copyright Anthony Louis 2018.

Author of books about astrology and tarot, including TAROT PLAIN AND SIMPLE, HORARY ASTROLOGY, and THE ART OF FORECASTING WITH SOLAR RETURNS.
View all posts by Anthony Louis →
This entry was posted in Astrology and tagged Equal Houses, Kennedy, Masha’allah, Pingree, Porphyry, Whole sign houses. Bookmark the permalink.