Secondary progressions are one of the most commonly used predictive techniques in modern astrology.  They are often attributed to the 17th century monk Placidus de Titus but their origin dates back at least as far as Vettius Valens in the 1st century CE. 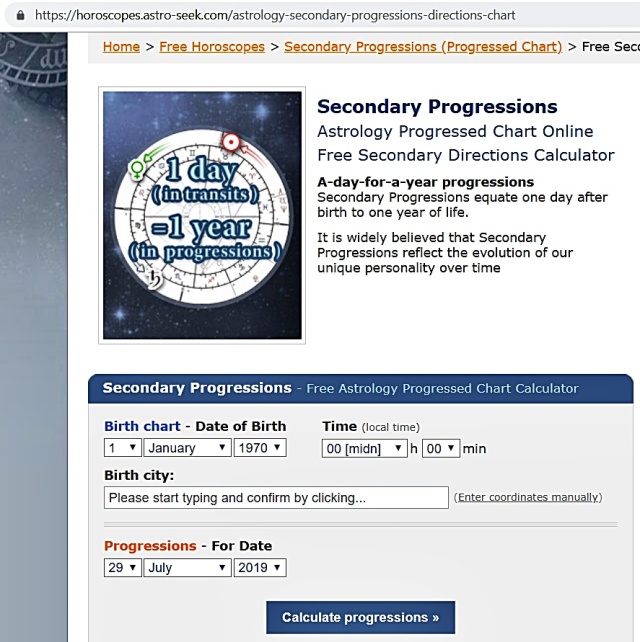 This is a screenshot of a web page that will calculate your secondary progressions for free: https://horoscopes.astro-seek.com/astrology-secondary-progressions-directions-chart

Vettius Valens was clearly referencing “a day for a year” when he wrote (italics & bold mine):

“… add a number of days to the birth date equivalent to the age (in years) of the native.  Then, having first determined the date, whether in the following month or in the birth month itself, cast a horoscope for that day.  <See> which star, if any, is in the Ascendant or is coming into conjunction with another star, and whether it is moving from an angle to a point following or preceding an angle, or from a point <following or> preceding an angle to an angle, or whether it was rising at the date of the delivery but is now setting or coming to some unrelated phase, or to something better.  You may consider these to be the periodic forecasts.”  — Vettius Valens, Anthologies, Book IX, Ch. 3, Mark Riley trans., 2010, p. 154.

Interestingly, Placidus, who is often credited with having invented secondary progressions, may have had something else in mind.

In an essay on “Placidean teachings in early 19th century Britain” Martin Gansten notes that Placidus suggested equating each lunar month (i.e., synodic month of 29.531 days) after birth with one year of life:

“Placidus wrote of his new prognostic techniques: ‘We call these motions the secondary directions, to distinguish them from the primary and principal; and we are of opinion, that Ptolemy, speaking of annual places, is to be understood of the places of those motions, and when of the menstrual, hints at the places of the progression’ (Cooper, Primum Mobile, p. 25). Today, secondary directions – equating the motions of the celestial bodies on each day following birth with the corresponding year of life – are generally known to astrologers as secondary progressions or simply progressions, while the ‘progressions’ of Placidus – equating each synodic month with one year of life – seem largely to have fallen into oblivion. There is no mention of either technique in Ptolemy, who, in the place referred to by Placidus (Tetrabiblos IV.10), was in fact writing about yearly and monthly profections. The reference to Kepler occurs in connection with Placidus’ argument for a connection between astrology and musical harmonies, also mentioned by Ptolemy; see Cooper, Primum Mobile, p. 79.”  — Martin Gansten in Placidean teachings in early 19th century Britain.

If Gansten’s interpretation of this passage in Cooper’s translation is correct, then Placidus may have misunderstood Ptolemy who was writing about monthly profections rather than directions (aka, progressions). It is possible, however, that Gansten understood the word “menstrual (monthly) in the above passage to mean monthly profections when, instead, “menstrual” was referring to critical days indicated by the hard aspects of the moon (every 7th day): “for the Moon, almost every seventh day, is placed in the critical place with respect to her place in the nativity.”

Here is the relevant passage from John Cooper‘s 1814 translation of the Third Book of Primum Mobile by Placidus, which is quoted by Gansten (bold and italics mine):

“65. Authors are divided, as to measure in direction; for some take the whole degree of the equator, for all and every one of the years; others, the Sun’s motion of the natal day: some, the Sun’s mean motion; whilst many more vary in their computations. But we, to the first year after the natal, take that part of the equator in which the Sun ascends in a direct sphere, by the motion of the first day following the nativity; to the second year, that which ascends by the second day’s motion; to the third, that which he ascends the third day after the nativity; and thus of the other subsequent ones: for we would have the directional motion successive, and always formed towards the succeeding places, and the Sun’s motion each day to be referred to, as the cause and rule to every year, as to their effects, in the same order and number.”

“66. But because the primary and principal motion of direction is derived from the motion of the Sun on the days following that of the nativity, as has been said, it consequently happens, that by some secondary means, the aspects that are made to the luminaries and angles on those days, jointly assist the significators of the primary directions; for this reason, we say, that the days whereon these aspects happen are very powerful in those years, which answer to those days, and on which they depend. From those motions, in preference to the rest, appears the true, real, and hitherto unknown, foundation of the critical or climactrical years; for the Moon, almost every seventh day, is placed in the critical place with respect to her place in the nativity; and (which is very important) experience wonderfully proves the truth of it; as may be seen in the examples extracted from Argol and Maginus. We call these motions the secondary directions, to distinguish them from the primary and principal; and we are of opinion, that Ptolemy, speaking of annual places, is to be understood of the places of those motions, and when of the menstrual, hints at the places of the progression.”

— John Cooper’s 1814 translation of the Third Book of Primum Mobile by Placidus.

Unfortunately, I don’t have access to the case examples from Argol and Maginus, mentioned in Cooper’s translation, to know whether Placidus was referring to equating one synodic month to one year of life, as Gansten suggests, or to equating each day after birth to one year of life — which is the method as understood by the 18th and 19th century British astrologers who promoted the teachings of Placidus.

3 Responses to Reflections on Secondary Progressions