Ayanamsa (also ayanabhāga) is a Sanskrit term which refers to the longitudinal difference between the tropical and sidereal zodiacs. Many ayanamsas exist so that Vedic astrologers may give different readings, depending of their ayanamsa of choice.

The beginning of the tropical zodiac is precisely defined as the intersection of the sun’s path with the celestial equator at the vernal equinox. The beginning of the sidereal zodiac has no mathematically precise definition so that practitioners are free to choose from a variety of starting points, which are within a range of about 6 degrees of each other.

According to wikipedia:
“Ayanamsa is mostly assumed to be close to 24° today, according to N.C. Lahiri, 23.85° as of 2000. This value would correspond to a coincidence of the sidereal with the tropical zodiac in or near the year 285 AD, roughly compatible with the assumption that the tradition of the tropical zodiac as current in Western astrology was fixed by Ptolemy in the 2nd century.”

Unfortunately, there is not universal agreement that the two zodiacs coincided in the year 285 CE. Some astrologers believe that they did not coincide until much earlier or later. The range of ayanamsas can be as much as 6 degrees apart, as can be seen in the list of some common ayanamsas for the year 2000 CE:

Because Lahiri is probably the most popular ayanamsa, I decided to look at the sky in Alexandria, Egypt at sunset on the vernal equinox in the year 285 CE. Using the program Stellarium, I generated the following image. 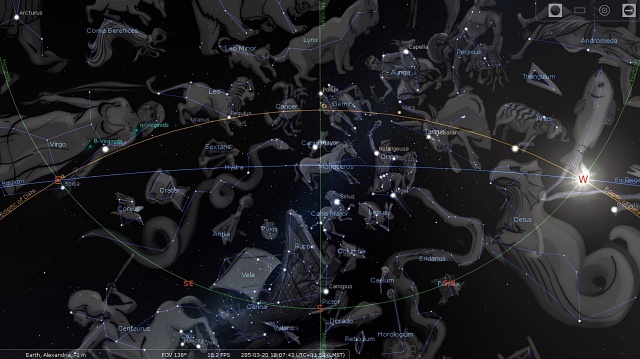 This sky map of Alexandria Egypt at the vernal equinox of 285 CE shows how the zodiac constellations appear at sunset. The meridian goes through the very beginning of Cancer.

In the above figure for the year 285 CE we are looking South toward the Equator (blue line) from Alexandria, Egypt at sunset on the day of the Vernal Equinox. The Sun is just setting at 0 Aries in the West where the ecliptic (orange line) meets the horizon (curved green line). Because it is the Equi-nox (equal lengths of day and night), the Equator (blue line) crosses through this point as well.

The vertical green line in the center is the meridian, which is passing through 0 Cancer — the Summer Solstice point that marks the beginning of the sign Cancer.  Notice that the sign Cancer begins just after the fixed star Pollux of Gemini passes over the mid-heaven. In addition, the fixed star Spica of the constellation Virgo is just rising on the eastern horizon.

The rear end of Aries overlaps with part of the Bull. There is a clear demarcation between the Bull and the Twins, and between the Twins and Cancer, and between Cancer and the Lion. The tail of the Lion hits the Virgin in the face, and the Virgin’s thighs and legs extend well into the constellation Libra, the Scales.

In fact, astronomers give the following dimensions to these constellations of the zodiac:

Because the constellations have such variable sizes, one can see, for example, why astrologers needed to include one of the constellation Pisces’ fishes into the beginning of the sign Aries.

In addition, the zodiacal distance from the star Pollux at the very end of Gemini to the star Alterf (the first star in Leo’s jaw) measures only 24d 39m of arc, so that the 30-degree sign Cancer includes part of the head of the constellation Lion.

The above figure is consistent with the Lahiri ayanamsa (and those which are close in value to it). It is impressive that the fixed star Spica is rising just as Pollux has finished culminating, giving way to the first degree of the sign Cancer crossing the mid-heaven. One can also see the symmetry of Cancer and Gemini across the solsticial axis, which is the basis for antiscions. It seems reasonable that any ayanmasa of value would have to keep Pollux at the end of Gemini on the opposite side of the meridian from Cancer at sunset on the day of the vernal equinox.

Author of books about astrology and tarot, including TAROT PLAIN AND SIMPLE, HORARY ASTROLOGY, and THE ART OF FORECASTING WITH SOLAR RETURNS.
View all posts by Anthony Louis →
This entry was posted in Astrology and tagged ayanamsa, Lahiri. Bookmark the permalink.

1 Response to Musings on ayanamsas