Recently I began reading Nested Time, the autobiography of Arthur M. Young. According to wikipedia, “Arthur Middleton Young was an American inventor, helicopter pioneer, cosmologist, philosopher, astrologer and author. Young was the designer of Bell Helicopter’s first helicopter, the Model 30, and inventor of the stabilizer bar used on many of Bell’s early helicopter designs.” It is a fascinating story of a bright and creative person who developed an abiding interest in astrology.

On page 6 of his book Mr. Young, a gifted and careful scientist, gives his birth data as 10:23:38 GMT on 3 November 1905 at 48N42, 2E20. He tells us that this is a rectified time and that the nurse who attended his birth in Paris had written 10:15 as the birth time. He later learned that in 1905 Paris was on Greenwich STANDARD Time (not GMT), so that there was about a 9 minute difference between GMT and GST, which closely matches his rectification based on astrological principles.

In addition, even though the nurse from Paris wrote the time in a letter to his mother, the coordinates he gives for his birth are not in Paris proper but are a bit south of Paris and match the coordinates of Morangis, France.  Because Mr. Young repeats these coordinates in all the appearances of his natal chart in the book, we can assume that he was born at latitude 48N42 a bit south of Paris, whose latitude is 48N52. Thus, the chart posted in AstroDataBank is a tiny bit off since is it cast for Paris proper rather than for Morangis, France. Below is my best reproduction of the chart which Arthur Young used for himself throughout the book (which I cast with Placidus houses and the true node). 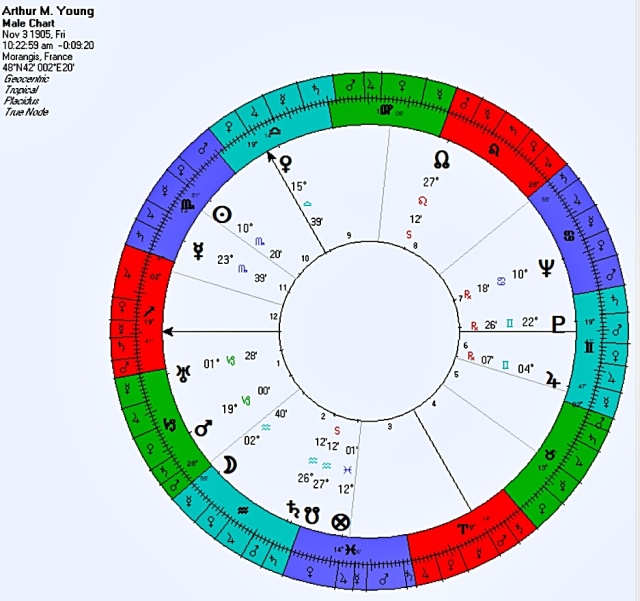 One of the events Mr. Young cites as verification of this chart is the death of his brother Sandy on 24 August 1927.

If we look at the primary directions for this period (Placidus semi-arc, Ptolemy’s key, with latitude), we find:

Furthermore, primary directed Saturn crossing over the Moon often heralds a period of emotional depression.  Young describes his response to the sickness and loss of his brother as follows (p.36): “With Sandy’s terrible illness, life turned bitter. I lost all interest in friends, studies, everything.”

Regarding the primary directed Sun crossing the MC in January of 1926 corresponds to the period when Young was planning a trip to Europe, which he carried out in the summer of 1926. The Sun rules Leo, which is the 9th Whole Sign from the Ascendant.  Leo also occupies the 8th Placidus house, and toward the end of the period of effectiveness of this primary direction his brother fell ill.

Author of books about astrology and tarot, including TAROT PLAIN AND SIMPLE, HORARY ASTROLOGY, and THE ART OF FORECASTING WITH SOLAR RETURNS.
View all posts by Anthony Louis →
This entry was posted in Astrology and tagged Arthur M. Young, Nested Time. Bookmark the permalink.

2 Responses to The Birth Chart of Arthur M. Young