Recently I’ve been trying to learn something about Indian astrology.  One of the concepts that caught my eye is the so-called planetary war or Graha Yuddha, which is an idea that, as far as I know, does not exist in Western astrology.

The basic concept is quite simple: when any of the five non-luminary planets (Mercury, Venus, Mars, Jupiter, Saturn) get too close in the sky, they engage in a battle for occupancy of the same small area. Usually this area is given as one degree of separation. When two planets get within one degree of each other, it’s as if each planet is invading the personal space of the other. According to https://www.lexico.com/en, personal space is defined as “the physical space immediately surrounding someone, into which any encroachment feels threatening to or uncomfortable for them.”

Unfortunately, the literature appears to be a bit unclear about exactly who wins the war. Questions that arise include: 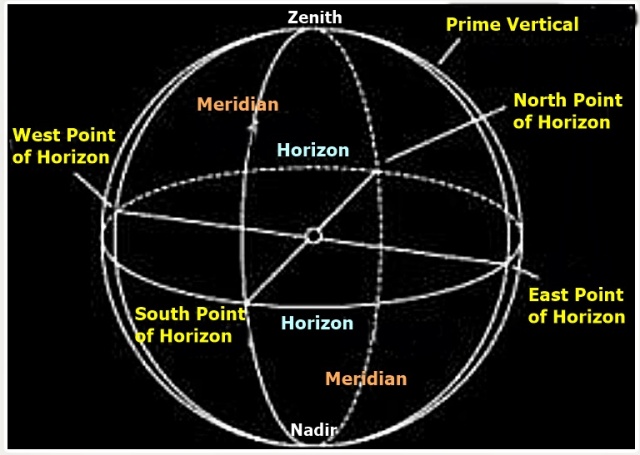 In their book on Vedic Astrology (Vol. 2, p.34), Kurczak and Fish take a strictly zodiacal approach, using only measurements on the ecliptic: “When there is a distance of one degree or less between two planets, they are considered to be in a state of conflict … the planet with the lower degree of [ecliptic] longitude becomes the victor.” These authors do note, however, that some astrologers judge the outcome of planetary war by the latitudes of the planets involved rather than by ecliptic longitude.

Another author, Sam Geppi, also views planetary war as a phenomenon measured along the ecliptic: “In planetary war, the planets have to be within 1 degree of each other, but there is conflicting information about whether the one with the highest or lowest longitude “wins”. Also it is unclear whether ecliptic longitude or declination is to be used. There are also certain things like “Venus always wins” (due to brightness) ,.. And certain references that imply the speed of the planets and many other things. In my research I have seen the planet with the lowest ecliptic longitude “wins” and the karmas of one get transferred to the other.”

Astrologer Vic DiCara has a somewhat different view of planetary war: “When planets get within 1º absolute distance from each other, they fight. … Venus never loses … she is by far brighter and stronger than any other starry planet. If Venus is not involved, the planet with a more northern declination wins the war. Why? He with the “higher ground” can win. What happens after the war? The victor gets stronger and the loser gets weaker.” I assume that what DiCara means by “absolute distance” is the distance between planets measured in 3-dimensional space. If so, then planetary war is fairly uncommon because planets which appear to be within one degree on the ecliptic are often several degrees apart in the sky. In addition, it is not clear why Venus always wins solely on the basis of brightness but the other planets win solely on the basis of having a more northern declination, regardless of brightness. If I were an ancient astrologer, I would look at the sky and judge both brightness and northerliness and make a judgment based on both factors.

In his book Jyotisha for Beginners, Marc Boney writes (italics mine): “From my researches, I have concluded that the main factor for determining the winner of the war is brightness. In which case, Venus will always win a planetary war in which it participates, otherwise, you have to rely on the astronomical data given in the programs to tell you which graha in the war is brighter. If two planets are very close in brightness, I would evaluate which is more north in its declination, which astrological software will also reveal.” (Boney, Marc. Jyotisha For Beginners (p. 115). Kindle Edition.) Boney gives the example of journalist Barbara Walters, whose Mars and Mercury are only 48′ of arc apart on the ecliptic. Boney does not mention, however, that the bodies of these planets are further apart than one degree in space, and their separation on the Prime Vertical is 2 degrees 4 minutes of arc. In addition, Mars and Mercury are separated by 1 degree 55 minutes of arc on the Placidus mundoscope, which measures distances in terms of the diurnal arc of each planet. Thus, Mars and Mercury may not be in planetary war at all because from the viewpoint of an observer at the birthplace, Mars and Mercury are more than one degree apart. In addition, Mercury is stationary direct in Walter’s chart and thus easily overwhelms Mars in its significance.

In a post on this topic Edith Hathaway writes:
“In his work Uttara Kalamrita, Kalidasa offers the following: ‘When two planets are in the same house and within one degree they are at war (Graha Yuddha). The planet which is north of the second is the winner. It acquires the strength of the Vanquished.’ The Surya Siddhanta states that ‘Venus is generally victor whether situated to the north or the south.’
Hathaway notes that the literature says that Venus is generally (but not necessarily always) the victor. In addition, she cites other factors that can contribute to victory including the influence, condition, mass, size and orbital speed of the planets involved, as well as the Nakshatra(s) that they occupy. It is a combination of factors that indicate the victor.

Vedic astrologer Komilla Sutton, in a YouTube video, takes a strictly ecliptic approach and comments that some astrologers regard the planet with the lower ecliptic longitude as the winner of the battle whereas others believe that the planet with the higher ecliptic longitude is the victor in the turf war. She believes that, just as in real life, nobody really wins a war because there is harm to both sides of the conflict. People with a planetary war in their charts can be torn in two directions. Sutton does agree, however, that Venus always wins because Venus is the brightest non-luminary planet. She also makes the important point that traditionally astrologers actually looked at the sky to judge the winner of such a war. Maybe we modern astrologers should also look directly at the sky to make our judgments.

Fortunately, with the program Stellarium, we can observe the sky for any date in history. Below is what the sky looked like at the birth of a person who had a serious car accident, requiring hospitalization. Pay attention to the planets Mercury and Saturn in the birth chart. At some point in this person’s life the close conjunction of Saturn and Mercury could manifest as a serious problem (Saturn) related to travel (Mercury).

Planets at birth of a person who had a serious car accident requiring hospitalization during adult life. Note that Mercury and Saturn are projecting themselves onto almost the same point on the ecliptic in the sign Scorpio, and so their projections onto the ecliptic are in a turf battle for that tiny region on the Sun’s path through the heavens. Saturn is ahead of Mercury in the zodiac. Saturn is to the north of Mercury in the sky, but Mercury is brighter than Saturn. Who wins the war?

Stellarium gives values for the brightness of the planets, and we can also see visually in the image that Mercury is slightly brighter than Saturn, so by the criterion of brightness Mercury has an advantage over Saturn in this war. On the other hand, Saturn is significantly more north of Mercury, and Saturn’s elevated status gives it an advantage over Mercury. Who wins the war?  Saturn is further along in the zodiac than Mercury, which has the lesser ecliptic longitude, so by this criterion Mercury wins. On the other hand, looking at the sky one might argue that Saturn’s greater elevation gives it an advantage of Mercury’s brightness so that Saturn wins. Or could the war possibly end in a stalemate?

I ran this chart (the person who was hospitalized after a car accident) though the KALA vedic software program, which is based on Ernst Wilhelm’s extensive research into original sources, and KALA determined that Saturn won the war.  Here is the chart: 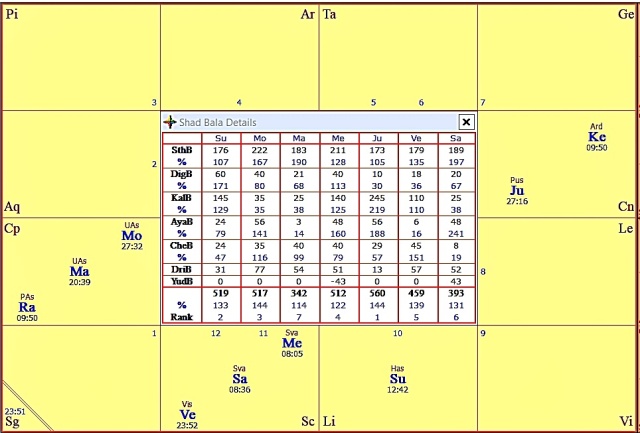 You can see that Mercury at 8 Sc 05 is quite close to Saturn at 8 Sc 36 in ecliptic longitude. Saturn has the higher ecliptic latitude in this chart. Those astrologers who believe that the winner should be judged by lower ecliptic latitude would declare Mercury the winner. In addition, Mercury is brighter than Saturn in this chart, so astrologers who judge the winner by brightness would also give the victory to Mercury. In contrast, KALA declares Saturn to be the winner of this war. Given the fact that she had a car accident (a collision, symbolized by Saturn) while traveling (Mercury), one could argue that Saturn won the war.

I don’t know what calculations KALA is using, but it appears to take into account the closeness of the ecliptic positions of Saturn and Mercury (and perhaps also the fact that Mercury and Saturn are quite close when projected onto the Prime Vertical) and the fact that Mercury is somewhat brighter than Saturn, whereas Saturn is significantly more northern than Mercury. On balance, Saturn appears to win but not by a large margin. As Komilla Sutton suggests, there are probably many casualties on both sides.

Here is the same chart projected onto the Prime Vertical. The zodiacal coordinates refer to the relative positions of the planets rather than their ecliptic longitudes. As you can see, Mercury and Saturn are only 19 minutes of arc apart when measured on the Prime Vertical, which would qualify for a planetary war. 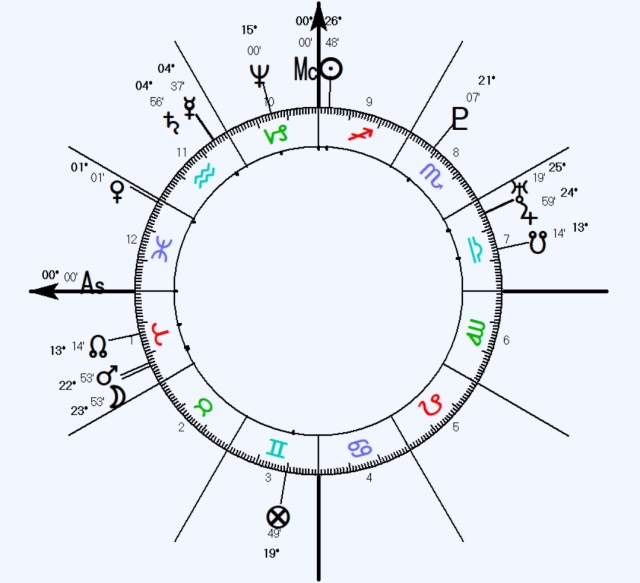 Having read the various authors and tried to understand the concept, my current understanding as a novice to the Vedic approach to planetary war is the following (though I may be wrong and would love to get feedback from those more expert in the subject): 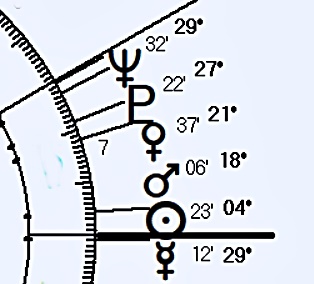 These are the relative positions of Hitler’s natal planets with reference to the western horizon as measured on the Prime Vertical at his birthplace. Note the angular distance between Venus and Mars which measures just under 4 degrees of arc, so no planetary war is in effect.

For example, as I am writing this the planets today have the following relative magnitudes (based on the magnitude scale used by Hipparchus & Ptolemy):

Using the second link above to compare the relative brightness of Mercury (-0.06) to Saturn (0.55), we find that Mercury is 1.754 times brighter than Saturn today, so that if they were at war and Saturn was more northerly than Mercury, then Saturn would probably win the war because Mercury is only slightly brighter: