The New York Times reported that on 09 February 2012 the “concept artist” Adam Adamowicz died of complications of lung cancer at the age of 43.  Adamowicz was widely respected for his work in video games.  According to the Times, his “paintings of exotic landscapes, monsters and elaborately costumed heroes and villains formed the visual foundation for two of the most popular single-player role-playing video games of all time.”  I wondered what might appear in the chart of such a talented artist.  His time of birth is unknown, so I cast a chart for the Sun on the MC to get the average positions (click on the chart for a sharper image): 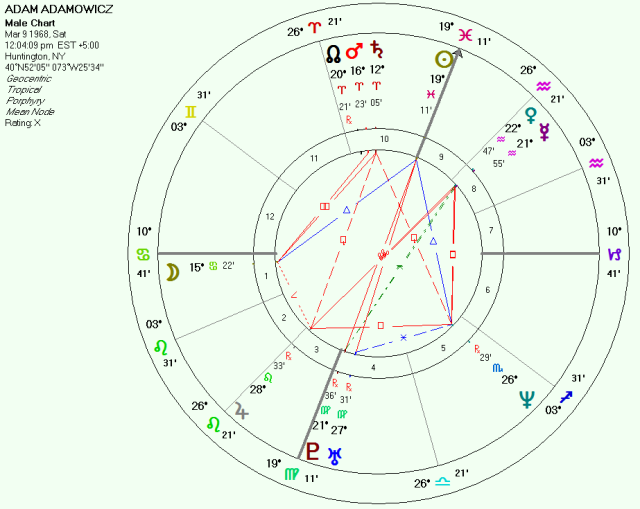 This is a stressful chart, full of squares and oppositions, which may be an astrological marker of his premature death.  The harmonious aspects involve trines to his Pisces Sun from the Moon and Neptune.  It appears that he channeled the tension in  his chart into his creative activities as an artist (Pisces, Neptune, Moon).  If he were born later in the day, the Moon in Cancer would clearly be part of a grand water trine involving the Sun in Pisces and Neptune in Scorpio – a great aspect for an artist.  His Mercury/Venus conjunction in technological Aquarius is another indicator of his technical artistic creativity.

Interestingly, he belongs to the Neptune in Scorpio generation (which included Whitney Houston and River Phoenix whose charts we looked at in previous posts).  Instead of channeling Neptune in Scorpio into a craving for intoxicants in order to escape reality, Adamowicz was able to direct this Neptune/Scorpio “energy” into imaginative art and the creation of fantasy worlds that allowed millions of video game players to escape from the real world.

The world of video games has lost one of its stars.

Author of books about astrology and tarot, including TAROT PLAIN AND SIMPLE, HORARY ASTROLOGY, and THE ART OF FORECASTING WITH SOLAR RETURNS.
View all posts by Anthony Louis →
This entry was posted in Astrology and tagged Adam Adamowicz, adamowicz, artistic creativity, concept artist. Bookmark the permalink.