On Saturday, 30 November 2013, at about 3:30 PM a car carrying actor Paul Walker crashed and exploded in flames in Santa Clarita (Valencia), California. Paul Walker played Brian O’Conner in The Fast and the Furious film franchise.  His Facebook page states that the actor was “attending a charity event for his organization Reach Out Worldwide.  He was a passenger in a friend’s car, in which both lost their lives.”

I wondered what was going on in his birth chart at the time and noticed that the recent solar eclipse had occurred opposite his natal Mars.  The red planet has to do with speed and fire and frequently figures in automobile accidents.  According to the NY Daily News, police determined that speed was a factor:

“The 40-year-old Walker was riding in a red Porsche GT about 3:30 p.m. when the sports car flew off the road and slammed into a tree in Santa Clarita, authorities and witnesses said. The car burst into flames.”  The NY Daily News also quoted a friend of Walker who said: “Him and his buddy, his brother in arms at heart, just decided to joyride, take a spin. Something we all do.”

Paul Walker was born on September 12, 1973 in Glendale, California, time unknown. Here is a generic sunrise birth chart for his birthplace with Placidus houses.

In the sunrise chart with Placidus or with solar sign houses, Mars rules the 8th house of death and also the 3rd house of local travel.

With his Taurus Mars square Jupiter in Aquarius in the sunrise 5th of fun and recreation, Walker described himself on twitter as  an “outdoorsman, ocean addict, adrenaline junkie … and I do some acting on the side.”  Mars square a 5th house Jupiter symbolically fits the notion of an outdoorsman and adrenaline junkie. With Mars in the Placidus sunrise 8th, his love of high-speed thrills becomes linked to his demise.  My hunch is that if we had his actual birth time the planet Mars would be closely linked to his Ascendant.

Earlier in November a solar eclipse fell in Scorpio in Walker’s 2nd house where a stellium of Scorpio planets during the eclipse opposed his natal Mars.  Here is his natal chart with the eclipse superimposed.

Note that at the time of the eclipse the stellium of Mercury/Moon/Sun/Saturn opposed his natal Mars, a red planet associated with speed and violent activity. 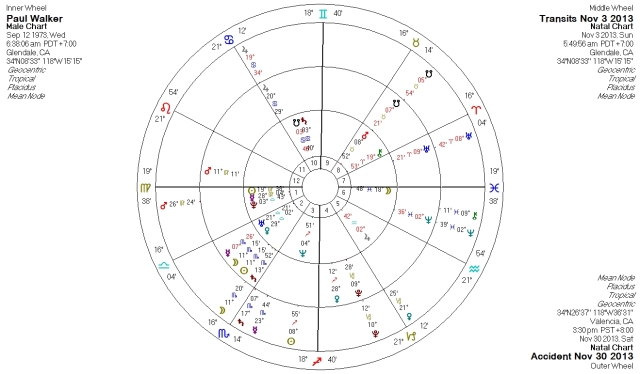 Fatal accident occurred at the lunar return of the Nov. 3rd eclipse Moon.

The eclipse Moon returned to its Nov. 3rd position during the eclipse at exactly 3:22 PM on Nov. 30th.  The police estimated the time of the crash to be 3:30 PM, just 8 minutes later.

The police reports suggest that Walker and his friend were joyriding in his red sports car when they lost control and veered off the road at high speed only to be stopped by a tree.  Note that Saturn (immovable obstacles) opposes natal Mars at the time of the eclipse.  Saturn also rules the sunrise 5th house of things we do for fun.

Addendum: NBC reported today (Dec. 2nd): “The Porsche that actor Paul Walker was riding in when he died on Saturday  was traveling at approximately 40 to 45 mph when it came to a bend in the road where the speed limit drops to about 15 mph, a law enforcement official familiar with the investigation told NBC News on Monday.”  CNN speculated that a tire blew out: “Torp thought he heard a blast in the distance before the car slammed into a light pole, he said. “What the first explosion was, I don’t know if their tire blew up, because it sounded like a tire blew on the car,” Torp told CNN Monday.”

“LOS ANGELES (AP) – The Porsche carrying “Fast & Furious” star Paul Walker was traveling approximately 90 mph when it lost control on a suburban street and crashed, killing the actor and his friend, according to an investigation by law enforcement agencies into the November accident.” (italics mine).  Thus, the astrological stressors on the planet Mars at the time of the accident were symbolically quite telling.

Author of books about astrology and tarot, including TAROT PLAIN AND SIMPLE, HORARY ASTROLOGY, and THE ART OF FORECASTING WITH SOLAR RETURNS.
View all posts by Anthony Louis →
This entry was posted in Astrology and tagged car crash, eclipse, joyride, lunar return, Mars, Paul Walker, red planet, The Fast and the Furious. Bookmark the permalink.