In his book the Mathesis (aka Matheseos Libri), the 4th century astrologer Julius Firmicus Maternus discusses the chart of a Roman Consul from the point of view of antiscions.  I used the James Holden translation of Maternus.

The word antiscion derives from the Greek anti (opposite, across from, equal but opposing) and skia (shadow cast by an object).  In astrology each point in the zodiac circle has an antiscion point, which is its reflection across the cardinal axis connecting the summer and winter solstice points, that is, from zero degrees Cancer to zero degrees Capricorn (the Sun’s highest declination to the Sun’s lowest declination with respect to the Earth’s Equator). 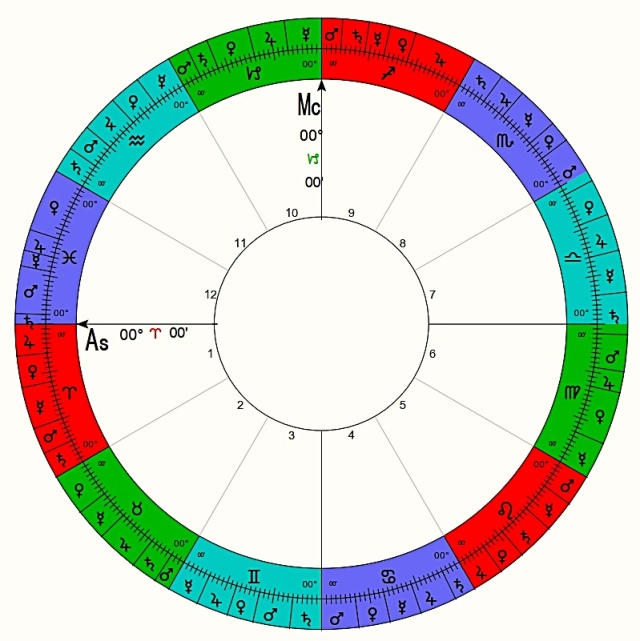 To locate the antiscion of a point, you simply look across the wheel on a straight line parallel to the horizon (which in this case is the axis connecting the Equinoxes).  Thus:

Because we are dealing with reflections, as the points in one sign increase from 0 to 29 degrees, their corresponding antiscion (shadow) points in the sign across the wheel on a line parallel to the horizon decrease from 29 to 0 degrees.  Thus, the antiscion of 5 Aries lies at 25 Virgo, and the antiscion of 12 Taurus lies at 18 Leo, etc.  You can imagine shining a flashlight on a point of the wheel, with the beam of the flashlight parallel to the horizon axis, so the the shadow of any point falls on its corresponding antiscion point on the other side of the solticial (meridian) axis.  If you were to fold the above figure in half along the vertical axis, so that the left hemisphere overlaps the right hemisphere, then the “solstice points” or antiscions would align.

Firmicus Maternus in the 4th century tells us that antiscion contacts between the zodiacal positions of planets has the same force or importance as the major Ptolemaic aspects.  Even if two planets lack an aspect such as a trine, sextile, square or opposition but they are connected by antiscion, then those planets are just as strongly related in the chart as if a Ptolemaic aspect existed between them.

To illustrate his point, Maternus discusses the chart of his patron, the Roman Consul Albinus.  Given the limitations of the ephemeris of his epoch, we can reconstruct the chart from Maternus’ description: 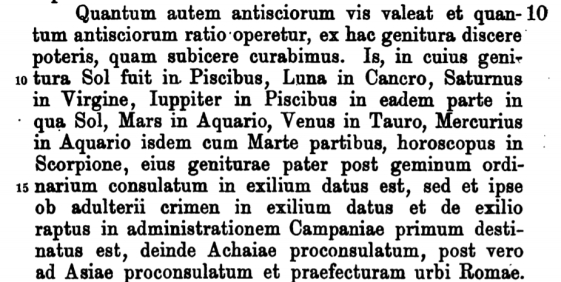 The original Latin text of Maternus in which he describes the chart.

Here is the ephemeris during the period in which these positions were in effect at the time of Maternus:

Because the Moon was in Cancer, the Consul was born between March 14 and March 16 of 303 CE.  Maternus says that the Sun was in the same degree as Jupiter, which suggests that either March 15 or March 16 are more likely, given that the Sun is approaching Jupiter during that period and the Sun is closest to Jupiter on March 16.

Further clues include Maternus’ comment that Mars sends his antiscion to conjoin the Ascendant and then to trine the antiscion of the Moon.  Assuming that Maternus has the correct position of Mars at about 11 Aquarius, the antiscion of Mars would like at about 19 Scorpio, placing the Ascendant between 18 and 19 degrees of Scoprio.  As Mars advances in Aquarius, according to Maternus it will soon trine the antiscion of the Moon, which thus must be at a degree somewhat greater than 11 Gemini.  A close approximation to the birth chart matching Maternus’ description has this data: March 14, 303 CE at 10:40 PM LMT, Rome Italy and looks like this (whole sign houses):

The following table shows the dignities and antiscions for this chart.

As you can see, if the antiscion of Mars conjoins the Ascendant, then the ASC must be at about 18 Scorpio.  Maternus says that Mars at 11 Aquarius applies to trine the antiscion of the Moon, which here lies at 15 Gemini.  Thus, Maternus is allowing planets to aspect antiscion points within the orb allowed to the planet.  Traditionally Mars has an orb or about 7 or 8 degrees.

Maternus comments that the Sun conjunct Jupiter in Pisces in the 5th house of Good Fortune would indicate that the native’s father, symbolized by the Sun, would be prosperous, fortunate and powerful.  But taking antiscions into account, Maternus notes that the Sun and Jupiter in Pisces send their antiscions into Libra, the fall of the Sun, the “sign in which it is humiliated and dejected, and also into the 12th house of the nativity, i.e. in the Bad Daimon, shows the paternal family to be of low degree, and it denotes a famous exile for the father himself” (Holden translation, p. 83).  He adds that the antiscion of Jupiter in the radical 12th indicates that both the father and the native will have many enemies.  Here Maternus seems to be interpreting the placement of the antiscion in a sign or house as a stand-in for the planet itself, as if the Sun and Jupiter in this example were occupants of the 12th house of the nativity.

In another section, Marternus appears to allow whole sign aspects when interpreting antiscions.  For example,  in the above chart Maternus comments that Mars in Aquarius sends his antiscion to Scorpio, a sign which is opposed to Taurus where Venus is posited, resulting in the native’s adulterous behavior.  In addition, Venus in Taurus sends her antiscion to Leo, a sign which is opposed to Aquarius where Mars is posited, thus reinforcing the natal Venus square Mars aspect and further indicating adultery.  It is not clear to me whether Maternus has in mind whole sign aspects or whether he is imagining the unfolding of the chart via primary directions during the course of the lifetime of the native, during which these antiscion aspects will perfect.

Maternus concludes the discussion of the Consul’s adultery with the comment: “But because Venus sent her antiscion from Taurus into Leo, i.e., into the domicile of the Sun, and into the MC [10th house], it made the Emperor pronounce a sentence against him for these crimes” (p.84, Holden translation).  Here the Leo 10th house and the Sun symbolize the Emperor, and the mere presence of the antiscion of Venus in the sign Leo seems to trigger the Emperor to action, which sounds to me like Maternus is thinking in terms of whole sign influences.

To end this post, let me quote the comments of one of my favorite contemporary astrologers regarding the above chart.  Deborah Houlding in her online article on antiscia writes:

“Firmicus gives no degree positions but amongst many of the points he makes regarding the debilitating effects of the antiscia connections in the chart he states that the Moon is positioned in Cancer, the ascendant in Scorpio and Mars in Aquarius.  By aspect alone there would be no recognised relationship between the Moon and Mars because their signs are inconjunct.  However the antiscion of the Moon in Cancer falls in Gemini which aspects Mars by trine.  The antiscion of Mars in Aquarius falls in Scorpio, in the ascendant and, in turn, in trine to the Moon.  Firmicus saw this relationship between Mars and the Moon as indicative of trouble and strife:”

‘And so the waxing Moon, attacked from all sides by the many influences of Mars, made this man, weakened in body, finally an exile’  (Matheseos, Bk.II.XXIX.16., Jean Rhys Bram translation),

All original material in this blog is copyright Anthony Louis 2019.

Author of books about astrology and tarot, including TAROT PLAIN AND SIMPLE, HORARY ASTROLOGY, and THE ART OF FORECASTING WITH SOLAR RETURNS.
View all posts by Anthony Louis →
This entry was posted in Astrology and tagged antiscia, antiscion, Ceionius Rufius Albinus, Firmicus Maternus, Mathesis, whole sign aspects. Bookmark the permalink.