Why I use a USA Gemini Rising Chart

Over the years various charts have been proposed for the birth of the United States.  Many astrologers use a July 4, 1776, chart because that is the date of signing of the Declaration of Independence.  Some astrologers prefer other historically important dates such as the adoption of the US Constitution, etc.  My own preference is the July 4th chart.  The question then becomes, “for what time on July 4th should we cast the chart?”  I have a bias for the Gemini rising chart, which I hope to explain in his post.

I first became interested in astrology at about the age of 10 or 11.  In my early teens (the late 1950s) I read everything I could find about astrology and began casting charts (by hand, since there were no personal computers in those days).  The only books available in our local small town library were those of Evangeline Adams, which I read and re-read many times.  I was particularly struck by her 1930 prediction that America would enter into another war when Uranus returned to Gemini in the early 1940’s.  She was using a Gemini rising chart for 3:03 a.m. as the basis of this prediction.  This chart has 20 degrees of Gemini rising with Mars on the ASC.

From articles in Dell’s Horoscope Magazine and other sources, I also found other times, usually earlier, for the Gemini rising chart: 2:13, 2:13:32, 2:14, 2:17 a.m., etc..  These times clustered around 7 degrees of Gemini rising with Uranus on the ASC.  I continued to pay attention to this issue and to experiment with the various charts.   In 1995 Amercian Astrology magazine attributed the 2:17 a.m. chart to H.V. Herndon, who apparently rectified it to this moment.  Frederick van Norstrand is also mentioned in this regard.

I was puzzled because the Uranus rising chart seemed to work so accurately in mundane predictions but there was no historical evidence that the Declaration of Independence was signed around 2 or 3 in the morning.  Then I came across a book that was quite enlightening: R.A. Billington, B.J. Loewenborg and S.H. Bruckunier, The United States, Rinehart publishers, New York and Toronto, 1947.  In the Introduction to this text (on p.15) the authors write: “The symbolic first breath, or birth hour, of the nation occurred in the early morning hours of July 4, 1776.  The writer has figured this to be just after 3:00 AM, however no documentary evidence exists to verify this early morning birth hour (or any other hour), so long a part of the tradition of the national chart.”  (italics mine)

I have italicized the word symbolic because when I read it a light went off in my head.  The Gemini rising chart is not the chart of an actual event; rather it is a chart of the moment on July 4, 1776, that best captures symbolically the birth of the new nation.  Uranus was first realized to be a planet in 1781 and astrologers quickly realized that Uranus was a symbol of both the American and the French revolutions.  What better moment to symbolize the American Declaration of Independence  than when Uranus (liberation from tyranny) came to the horizon on July 4, 1776.  [My own view is that astrology is a divination system that uses events in the “real” world as symbols from which it can derive meaning.]

Uranus exactly crossed the ASC in Philadeplphia at 2:18:54 a.m. LMT, or at 2:14:58 LAT.   If we assume that astrologers were symbolically looking for Uranus to lie in the 1st house closely conjunct the ASC and allow a one-degree orb, then the earlier times for the chart would be 2:15:18 LMT, or 2:11:22 a.m. LAT.  I don’t know what time system was in use in those days.  Here are the possibilities in an easier to see format:

I am suggesting that the Gemini rising chart is a purely symbolic chart of the USA based on the time that Uranus was in the 1st house and close to the ASC, specifically at the midpoint in time between when Uranus was one degree away from the ASC and when it was exactly on the ASC.  The time may have been measured in either LMT or LAT, which would give birth charts of 2:17:06 AM LMT or 2:13:10 AM LAT respectively, almost exactly the times used by the two most popular Gemini rising charts.  [Another popular chart is the so-called Sibley chart for about 5 p.m., which has Sagittarius rising and the planets in the houses opposite those of the Gemini rising chart.  Some astrologers have disputed the historical accuracy of the Sibley chart while others insist that it works, so this chart may also be a useful alternative symbolic chart of the USA.]

Over the years I have used the Gemini rising chart with good results and have tweaked it to about 2:13:48 AM LMT (a 7 Gemini 27 ASC).  Other astrologers, like  Don and Jayj Jacobs, have rectified this chart to 2:14:14 AM LMT (a 7 Gemini 35 ASC) and also reported excellent results:  “Don ‘Moby Dick The Astrologer’ Jacobs – my dad – and I, and all my subsequent partners, in presenting the Annual Prediction Seminars have used 7 Gemini 35 for the US Ascendant on July 4, 1776, since 1971. Our media measured accuracy rate of >95% validates that chart & Asc. As do my recent Afghan-Special Ops predictions. Moby (with my assistance) predicted the entire Watergate scenario before the fact and to the day, week after week in a nationally syndicated column. For that he got a place on Nixon’s Enemies list & an FBI file.”  Given my own experience and the accurate published predictions of the Jacobs, I think a symbolic birth time of about 2:14 AM LMT produces a very effective chart.

Let me end with an example of my use of the chart.  In late 2000 I was contacted by the editors of StarIQ.com with a request for my predictions for 2001.  Noticing that a solar eclipse was occurring near the 2000 winter solstice and close to the beginning of the New Year, I superimposed the eclipse chart for Washington, DC, (the current seat of government) on the USA Gemini rising birth chart for Philadelphia.  I was reading a lot of Lilly and Morinus at the time, so I had my computer set for Regiomontanus houses.   Here is the combined chart:

I noticed immediately that the solar eclipse of December 2000 was occurring almost exactly on the Gemini rising Regiomontanus house of the USA, the MC of the eclipse for Washington was in the 8th house, and the ASC of the eclipse was square to the USA natal Sun.  Here is what I wrote at the very beginning of the year 2000 (this was published online in February 2001 at StarIQ):

“The year 2000 ends with a partial solar eclipse on Christmas Day. Comparing the year 2000 Christmas eclipse to the U.S. Gemini-rising chart, I would make the following predictions for 2001.”

“The eclipse takes place in the U.S. natal Eighth House, suggesting that the nation’s economy will dominate the news during the coming year. With the eclipse chart’s Sun, Moon and Mercury all opposing the natal U.S. Venus and Jupiter in the Second House of money, we can expect a significant economic downturn, most likely a recession within the first six months of 2001.”

“The Eighth is also the house of death. With the eclipse chart Midheaven for Washington, D.C. in the Eighth House and the eclipse chart Saturn in the nation’s Twelfth House of loss and sorrow, there is a likelihood of the death of an important national figure and a period of national mourning in 2001. In the Astro*Carto*Graphy map of the eclipse, the Saturn, Neptune and Uranus lines pass through the West coast, suggesting that someone in that region (perhaps former president Reagan) may pass on during the coming year.”

I could not even imagine the events of 9-11 at the time I made the prediction based on the Gemini rising chart, but a period marked by death and national mourning seemed apparent in the figure.  It never occurred to me that the “important national figure” whose death I saw in the chart would be the World Trade Center.  Only in hindsight did I realize that when eclipse-ruler Saturn (structure) entered Gemini (the twins) and opposed Pluto (radical transformation) in August of 2001, would the symbolism of the destruction of the twin towers (Pluto opposing Saturn in Gemini) become apparent.  In fact, if we calculate a national chart for the exact moment transiting Saturn opposed Pluto on Aug 5, 2001 and superimpose the Gemini rising chart upon it, we have a quite striking astrological combination: 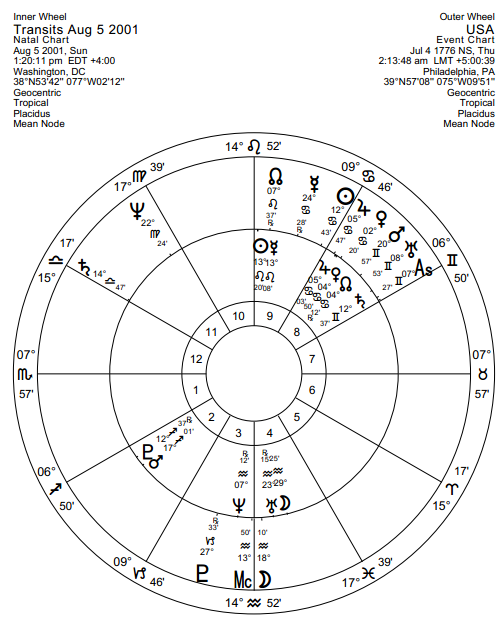 Author of books about astrology and tarot, including TAROT PLAIN AND SIMPLE, HORARY ASTROLOGY, and THE ART OF FORECASTING WITH SOLAR RETURNS.
View all posts by Anthony Louis →
This entry was posted in Astrology and tagged 9-11, july 4 1776, signing of the declaration of independence. Bookmark the permalink.

8 Responses to Why I use a USA Gemini Rising Chart