The Foundation of Baghdad — Tropical versus Sidereal

Note: This was originally posted in October 2013, but there is an extensive update at the end which was done in September 2017.  The update is a response to the many comments that were left about the original post.  I have somewhat revised my thinking, and at the very end of this post is my closest approximation by modern computer to the chart described by Al-Biruni for the foundation of Baghdad.

According to James Holden, the city of Baghdad was founded according the the principles of electional astrology to place the greater benefic Jupiter close to the Ascendant at approximately 2:40 PM LMT:

“...the 11th century astronomer/astrologer/scholar al-Bîrûnî has preserved the foundation chart of the city of Baghad.  The Caliph al-Mansûr (c.679-777) desired to build a new capital city.  He told his court astrologer, Nawbakht the Persian (c.679-777), to select a favorable time to begin construction. Nawbakht, with the assistance of the young Mâshâ’allâh (c.740-c.815) and other prominent astrologers of the time, selected the early afternoon of 4 Jumada I 145 A.H., which is equivalent to Saturday 31 July 762 in the Julian calendar.”

I have no idea whether 4 Jumada I 145 A.H. is accurately converted to July 31, 762 Julian.  Holden presents a chart in the tropical zodiac with Mars in early Gemini mutually applying to an opposition of ASC-ruler Jupiter across the horizon.  At first blush, this seems like a terrible choice for an electional chart and it made me wonder whether the original chart was cast using the sidereal zodiac.

I did a google search and found a comment by Tom Callanan that “Masha’allah’s greatest pupil, Abu Ali al Khayyat used whole sign houses. One might expect that he would have used a fixed zodiac as well.”  Other sources also suggest that the sidereal zodiac was in use in Baghdad at the time of the founding of the city.

The significance of using the sidereal zodiac in 762 CE is that on July 31st, Jupiter is still in Sagittarius but Mars is at the end of Taurus rather than at the beginning of Gemini.  Sagittarius and Taurus do not behold one another, so that Mars would no longer be considered in opposition to Jupiter according to the Hellenistic tradition. In fact, Mars would be tucked away in the cadent 6th house below the horizon.

A potential problem with either the tropical or sidereal chart is that the Moon lies in the via combusta.  Electional astrologers often mitigate this condition by placing the Moon in favorable aspect to the Part of Fortune.  At 2:50 PM LMT the Moon is exactly trine the Part of Fortune and, as an added bonus, the Sun in Leo is exactly trine the ASC.  Having both the Sun and Moon making highly favorable trines is a great feature for an electional chart.

If my hypothesis is correct, here is the most likely chart for the foundation of Baghdad, cast in the sidereal zodiac with Whole Sign houses for 2:50 PM LMT:

This chart has a lot going for it.  Both benefics, Jupiter and Venus, are angular and, in fact, are the only angular planets in the chart.

It is a Saturn day during a Jupiter hour, and Jupiter rules the ASC and occupies the first house.  Hour agreement with the ASC is always nice in an electional or horary chart.

Mars, which in day charts according to Hellenistic astrologers is more evil than Saturn, is safely tucked away in a cadent house that does not behold the ASC.  Because Mars “can’t see” the ASC-ruler Jupiter, Mars cannot harm the election.  Mars is also fairly content in the 6th house, which is the place of its joy. In addition, given that the Persian astrologers shared knowledge with Indian astrologers, we can note that, in Jyotish, Mangal or Mars in sixth house of the horoscope confers the native with wealth, power, good lands, a fighting spirit and success over enemies.

Finally, Hellenistic astrologers would apply the concept of “overcoming” to his degree-based opposition.  As I understand the idea, if the chart were turned so that Mars was exactly on the eastern horizon, Jupiter would be more elevated than Mars in the upper hemisphere.  In such a case, Jupiter would be said to “overcome” Mars and have the upper hand in what happens with the opposition.  In other words, “overcoming” involves dividing the chart into two hemispheres with the planet in question at the boundary dividing the hemispheres.  All planets that precede the planet in question in that hemisphere are said to overcome it.  In turn, the planet on the boundary of the two hemispheres “overcomes” all the planets that follow it in that hemisphere.

MC-ruler Mercury is quite powerful because he is making a station.  Mercury went stationary direct in the early morning hours of August 1st, a day after this election.  Jupiter went stationary direct during the early morning of August 2nd, less than 48 hours after this election.  There might be some initial difficulties with the founding but they would very quickly be overcome as Mercury and Jupiter turned direct over the next day and a half.

The Moon is in the via combusta but is fast in motion and exactly trine the Part of Fortune.  The Moon is disposed by an angular Venus and will trine Venus, its last aspect before leaving its sign.  Fortunately the Moon is not in Scorpio, the sign of it fall.  Most likely this date was chosen to avoid the Moon in Scorpio.

The Sun is strong in Leo and occupies the 9th house of its joy.

The Moon lies in Libra, ruled by benefic Venus, and occupies the 11th house, the joy of the great benefic Jupiter.

The main problem with this as an electional chart is the square of MC-ruler Mercury Cancer to Saturn in Aries.  In the Hellenistic tradition, Saturn in a day chart is restrained from being as malefic as it might be otherwise.  Saturn is also below the horizon, a more inferior location to Mercury’s position.  However, Saturn precedes Mercury in the zodiacal order of the signs, so in this sense the malefic has an upper hand.  Saturn fortunately is peregrine (without essential dignity) and in his fall in Aries.

Mercury and the Moon are in square aspect to peregrine Saturn, but this occurs in signs of long ascension so it is kind of “stretched” into having some of the properties of a trine.  The Moon’s next aspect is an opposition to Saturn, but the Moon will quickly move on to trine Venus, who receives her, before leaving its sign.

As I study this chart, the only way it makes sense to me as a good electional chart is if it was judged in the sidereal rather than the tropical zodiac.  This raises a vexing question.  How can an electional chart be favorable in one zodiac and unfavorable in another?  Can both be true?

Addendum (September 2017) regarding Mars in Gemini:

Having reviewed the various references mentioned in the comments, and especially the remarks of Deb Houlding, I would like to add the following. First, here is the table of planetary positions compiled by Allawi from the work of Al-Biruni and Ibn Faqih for the date 4 Jamadi Awwal/31 July 762 when the city was founded. There appears to be an error in Allawi’s table because Saturn would have been in very early Taurus (not early Aries as listed in the table): 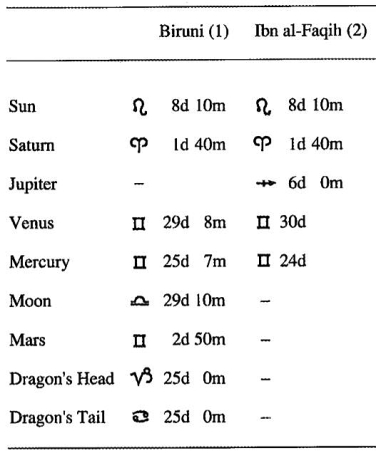 According to Al Biruni report in his ‘Chronology of Nations’, the founding of Baghdad chart looked like this (excerpted from the text):

This chart corresponds to the the afternoon of 31 July 762 in Baghdad. Note that Venus lies at the end of Gemini, but in tropical calculations for this date Venus lies at 2 Cancer 43 in the tropical zodiac, suggesting that the chart must have used some version of a sidereal zodiac. The difference in arc between tropical Venus at 2 Cancer 43 the the position given by Al-Biruni of 29 Gemini 8 is 3 degrees 35 minutes.  The Moon is at 19 Libra 10 in this reproduction of Biruni’s chart, as opposed to 29 Libra 10 in Awalli’s listing.  Saturn is omitted from this above diagram, but in July of 762 Saturn was in late Aries in the sidereal zodiac and at 1 Taurus 25 in the tropical zodiac. Here is a reproduction what the chart looks like in Al-Biruni’s original manuscript: 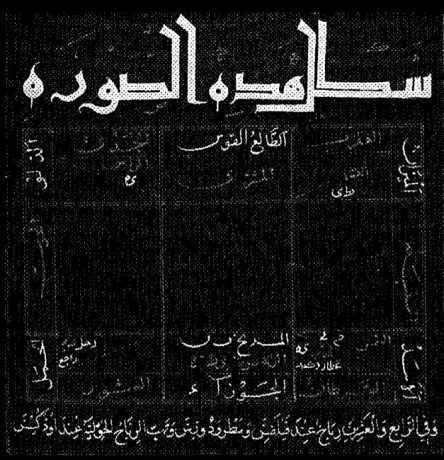 According to Allawi, the Ascendant of the founding of Baghdad chart was chosen as 6 Sagittarius on the basis of locational astrology, a precursor of the modern method called by the trademarked name Astro*Carto*Graphy. Allawi notes that the Ascendant of the Baghdad horoscope was chosen to coincide with the celestial longitude of the Baghdad construction site as measured from the mythical city of Kandakas in Eastern China, which was taken as the 0 Meridian, much as we use the Greenwich Meridian today. In addition, writes Allawi, the 6 Sagittarius Ascendant makes “the distance between the ‘face’ of Baghdad and the azimuth of Mecca” (the holy city of Islam) equal to the distance from the Sun at 8 Leo to the Ascendant a 6 Sagittarius of the Baghdad horoscope.

If we calculate the birth of Baghdad chart in the sidereal zodiac using the Shill Pond ayanasma, we get the following chart, which is close to Al-Biruni’s report. This version of the sidereal zodiac produces a chart for the founding of Baghdad which is a good approximation to the historical record, including the placement of Mars in the early degrees of Gemini:

Below is the same chart with the table of essential dignifies and other information. For example, if this chart is correct, the construction of Baghdad began during a Jupiter hour when the Lot of Spirit (the lot of the Sun god) exactly conjoined the Midheaven. In terms of an election, the Sun is strong in Leo and rejoices in the 9th house.  The Sun trines both the Sagittarius Ascendant and Jupiter within a degree or two.  The Sun and Jupiter are the two strongest planets in the chart. The Lot of Fortune at 22 Aquarius 58 closely conjoins the Lot of Victory (which is a Lot of Jupiter) at 22 Aquarius 55. The midpoint of the Lot of Victory and the Midheaven degree falls precisely on the Jupiter/Ascendant conjunction. The planet Mercury, which rules the Gemini 7th house of Baghdad’s enemies lies in aversion to its own domicile and thus can’t manage its own affairs well.  In addition, Mercury, which rules the 7th of enemies, and Mars in the 7th are both peregrine. Jupiter, which is the benefic of the day sect in a day chart opposes peregrine Mars in the 7th. Jupiter lies in his own domicile and terms and in the triplicity of the Sun. Jupiter is also lord of the hour.

Below is the chart cast in the tropical zodiac with 6 Sagittarius rising.

Finally, after much tinkering:

My closest approximation for Al-Biruni’s birth of Baghdad chart 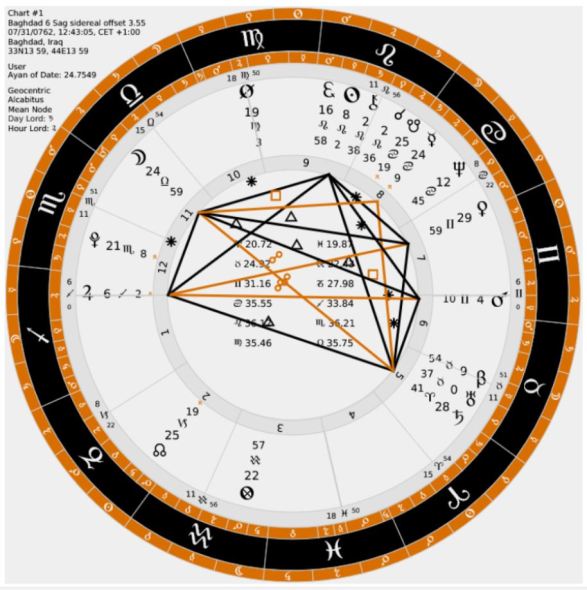 This chart cast for 31 July 0762 at 2:43:05 in Baghdad (a Saturn day during a Jupiter hour) seems to best fit Al-Biruni’s description.  Using Delphic Oracle software, I used a sidereal zodiac with a decimal Ayanasma fo 23.75 and a zodiac offset of +3.55. (The same chart can be produced with the tropical zodiac using an offset of about -2.75).

Nina Gryphon. Electional Astrology of the Founding of Baghdad.

Skyscript.co.uk discussion of the Baghdad chart.

Author of books about astrology and tarot, including TAROT PLAIN AND SIMPLE, HORARY ASTROLOGY, and THE ART OF FORECASTING WITH SOLAR RETURNS.
View all posts by Anthony Louis →
This entry was posted in Astrology and tagged electional astrology, Foundation of Baghdad, part of fortune, sidereal zodiac. Bookmark the permalink.

13 Responses to The Foundation of Baghdad — Tropical versus Sidereal